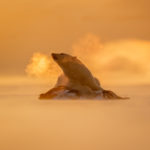 There are few animals on the planet that inspire and evoke emotion like Usrsus maritimus - the Polar Bear. The worlds largest land predator, the Polar Bear is actually a marine mammal that spends the majority of its life on the frozen sea ice. Living in some of the world’s most remote and inhospitable regions the Polar bear can weigh up to seven hundred kilograms and during … END_OF_DOCUMENT_TOKEN_TO_BE_REPLACED