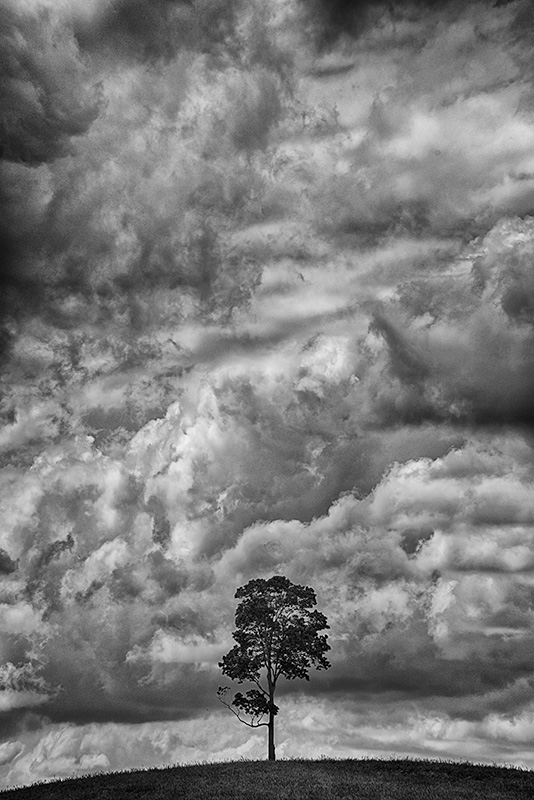 Seeing it Is The First Part

After working a good part of the day on Luminous-Landscape business, Michael Reichmann  and I decided we would reward ourselves with a photo excursion. So we drove some back roads near Cremore, Ontario and as we were driving down this remote dirt road we both spotted this far off tree on a hill.  We imediately both saw the potential and pulled the car over. Both of us got our tripods and cameras out and we worked the location.  As I was shooting I saw the shot as a vertical with the tree perfectly centered and the clouds being the main subject. I bracketed the shots with 5 expsoures with a stop difference between each. I wanted to make sure I had an exposure with the clouds not being blown out. I already knew how I would achieve the image I wanted. I knew this image was going to be made in post processing. Capturing it was only part of it.  Let me show you how I made the image above.

I loaded my images intoCapture One 7, my RAW processor of choice. C1 allows me to customize my workspace and do many things to make a fast and efficient workflow. As shown below I made some adjustments on the selected image. I selected the image to process based on a good histogram. A good histogram is crucial to being able to pull the max out of an image like this. 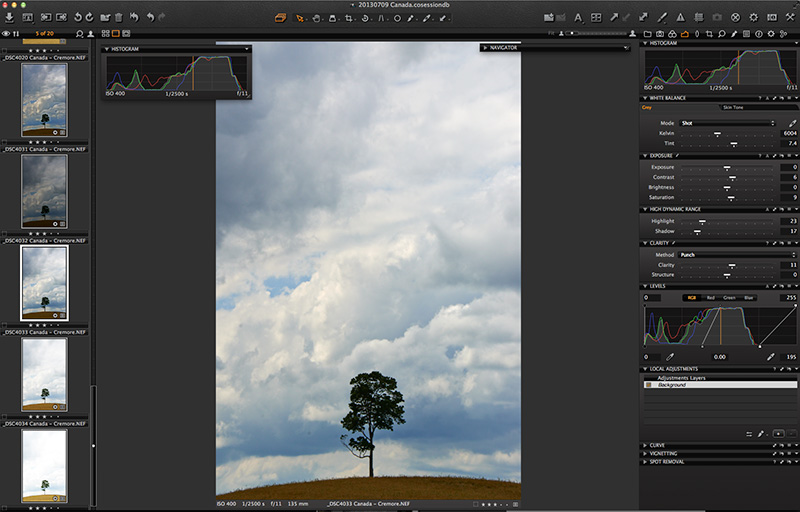 Capture One window with adjustments that were made prior to export

After the adjustments as seen above in Capture One I set up a process recipe for a TIFF file at 100% size in ProPhoto. I set the recipe in C1 to open the image in PhotoShop CC as shown below. 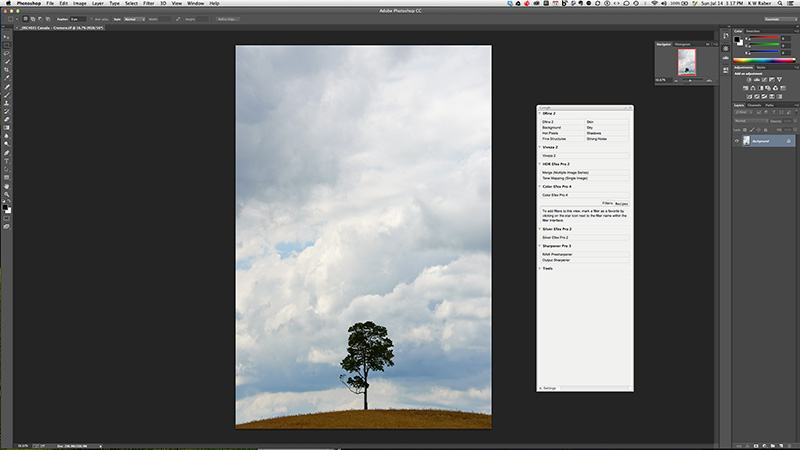 Photoshop after the C1 export is made, The image has a ways to go . . .

and the resulting image looks like the picture below. This is the before and the image at the top of the page is the after. 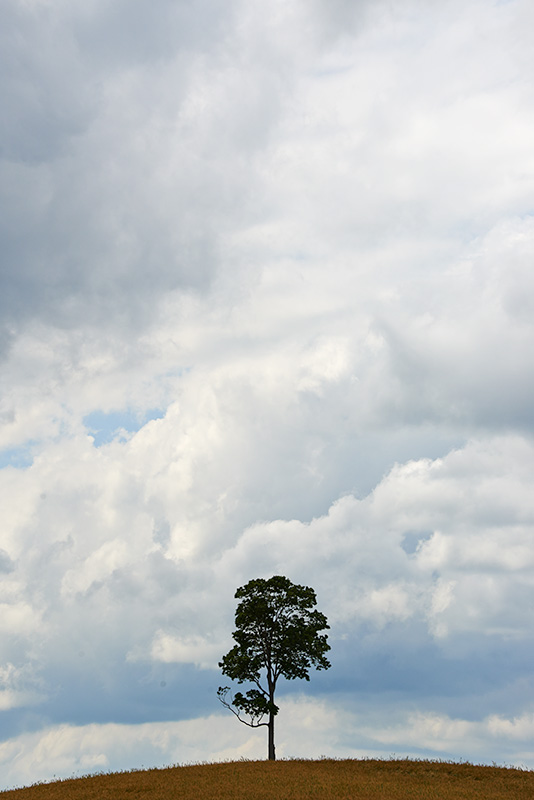 A lot different than the image at the top of this article. . .

Probably, like yourself I love photography but don’t have a lot of time to spend working an image with layers, masks and all sorts of extra post processing tricks. Over the last few years I have resorted to 3rd party tools. There are a number of them that are excellent at helping a photographer achieve a great look without having to be a genuis in Photoshop or speding a lot of time. My favorite third party options areOnOne Software,  NIK SoftwareandTOPAZsoftware. RecentlyNIKwas acquired by Google and they now bundle one of the best set of applaications in a bundle for around $150 USD. I have become a NIK fan and recently introduced this great software to Michael. Michael’s recent postThree Double Scoops Pleasewas created using NIK Software. Let me now show you how I used three of NIK’s applications to createLonely Tree.

When NIK software is installed it places a Palette in the Photoshop window like the one below. Simply clicking on one of the applications opens up the respective adjustment window. 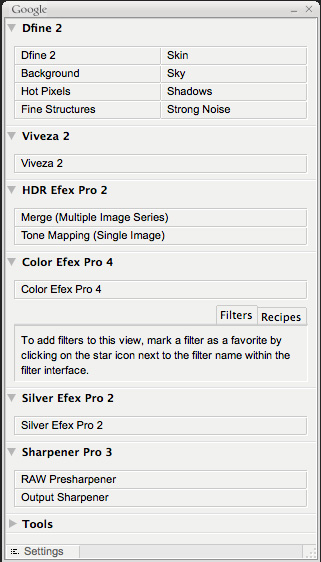 The first step in the workflow is to selectHDR Efex Pro 2and the Tone Mapping (Single Image) option. This now takes the image and opens it in a new floating window. 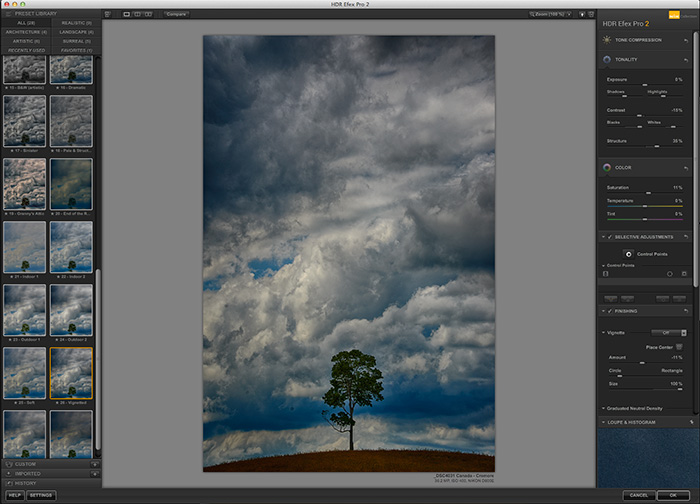 ThisHDR Efexwindow presents you with many options and examples of various effects that are possible from a list of presets.  Each preset allows you a staring point for making even finer adjustments. I selected the option as shown below and then did a few small tweaks. This selection and the fine tuning adjustments can be saved as a new preset so that it can be duplicated again with similar images.

After I was happy with the changes I saved the image and it looked like the image below. 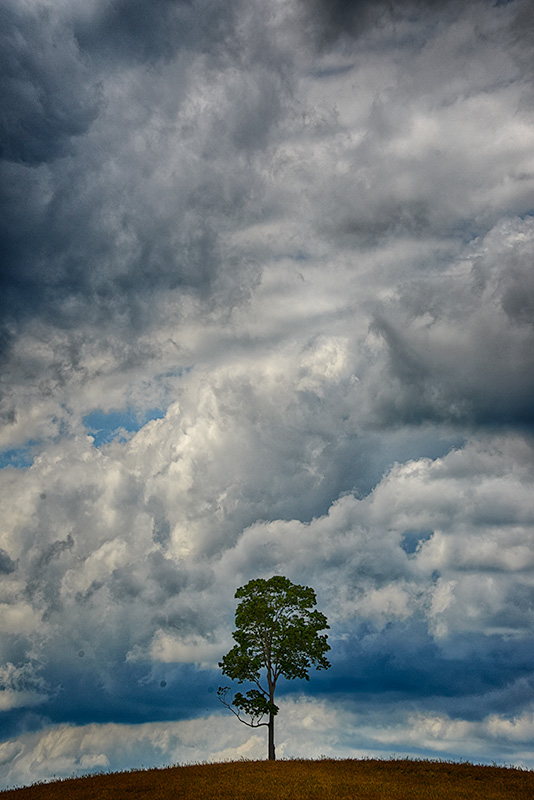 As you can see some spots have now shown up which is a side effect of doing some of the adjustments.  So, before going any further I’ll use the spot healing brush in Photoshop and clean these up. While I am getting closer to the desired effect I have a little bit of work to still do. Keep in mind we are talking only minutes of work so far. The hardest part is to make an artistic choice of the desired effect. Once I was happy I saved the image. It is now time to fine tune the image. I want to make some areas darker and to adjust some other small areas. For this I will selectVivezafrom the NIK palatte. 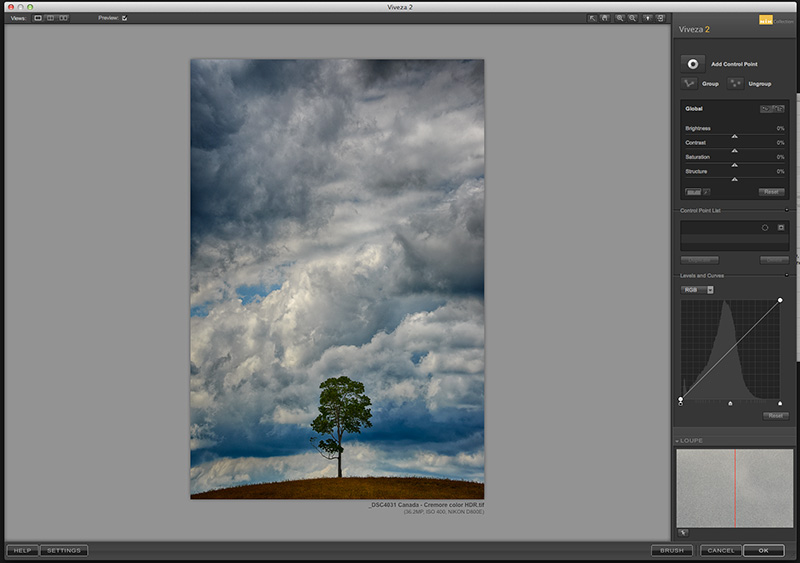 Above is the new window that pops up.Vivezais one of the coolest programs I have seen. I have used it for years and it allows corrections of certain areas of an image by using control points. You basically place a point on an image, adjust the radius of the region you want the adjustments to be made and then using the sliders attached to the the point make your adjustments. For this image I wanted to darken the dark areas of the sky, and to adjust the cloud area running through the tree to be the same density. In addition I desaturated some of the color shift to blue by using the saturation slide and desaturated the selected areas.  Again, once I was satisfied I saved the image. A new layer is now added to the exisitng image in Photoshop. The examples below show how the control points looked. 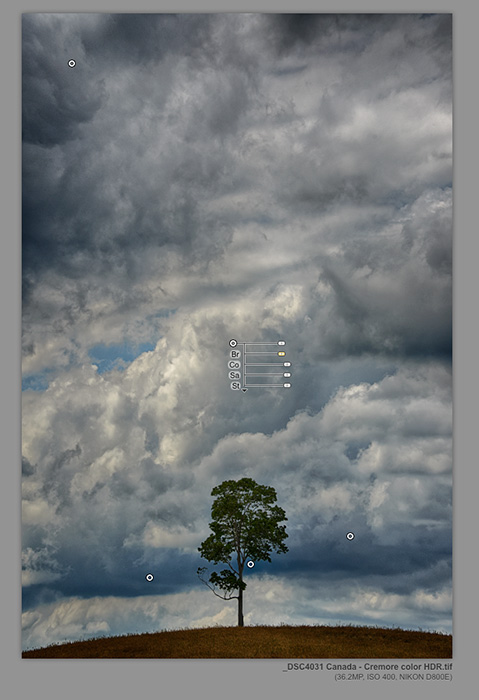 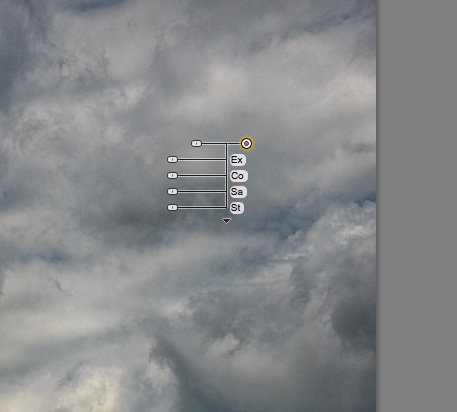 Now that the color image is adjusted it is time to do the final conversion to B&W. You may be asking why didn’t I adjust to B&W before processing out to the TIFF?  Simply I wanted to make adjustments in HDR and Viveza with the color tonality controls. I also knew that the the next step using Silver Efex Pro 2 would give some amazing choices for the B&W conversion once the steps above were carried out. 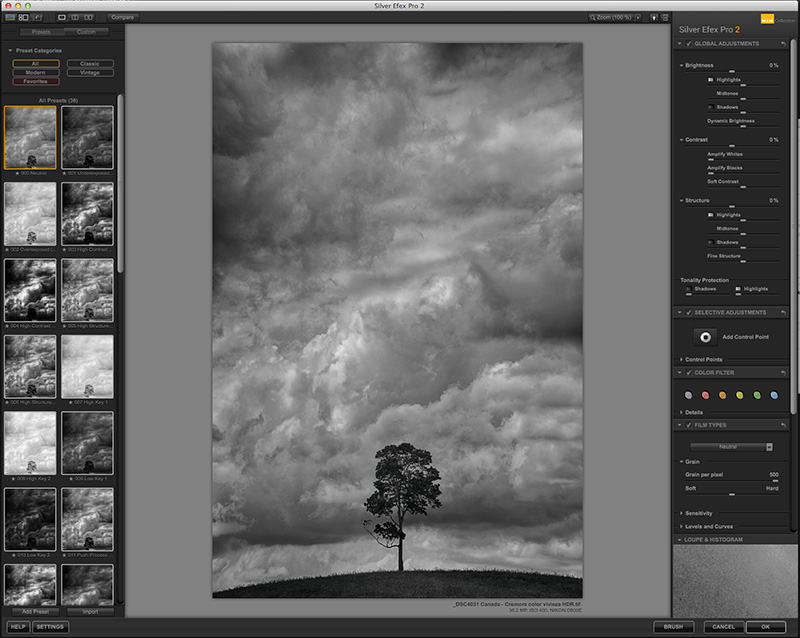 Silver Efex Pro 2is amazing and has become a defacto standard for a lot of photographers doing B&W. It not only has some great presets, but also allows you to change an image’s look by choosing one of the standard color filters that we became so familiar with back in the B&W film days. (am I dating myself?) You will be amazed at the variety of looks that can be achieved using this program. The hardest part is making the artistic decision of what effect to use. Typically when I use this program I select an image from the presets then run through a series of adjustments until I get the look I want. Then I save that as a preset so I can use it again if needed. In the end after the choice is made I’ll have several layers showing in Photoshop. I save the image with layers so I can go back to individual layers if needed later. Then I flatten the image and save it as a flattened version both in TIFF for printing and JPEG for use on the web.

It’s all about knowing your tools. When I shot this image I already had a pretty good idea I could achieve the result I was looking for. This image is different as it is dramatic and makes the sky the main interest and the tree seconday. It takes both elements though to make this work so well. It’s fun to shoot with friends. Michael and I were standing feet apart and both of us came away with a different interuptations of the scene.

What is nice about this image is that it proves you don’t always have to go to grand places to make a masterpeice image. Sometimes like this shot you can find a keeper in your onw backyard.

For questions or comments please feel free to contact me at kwr@luminous-landscape.com.  More of my images can be viewed on my daily blog and web site atkevinraber.com