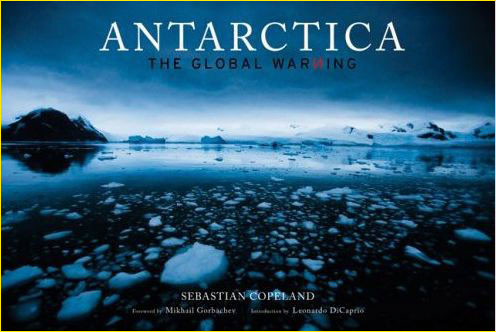 Antarctica – The Global Warningarrived on my desk for review in early August. My first response on glancing at the dust jacket was,what a somber scene to choose for the cover. It wasn’t till some days later when I had an opportunity to sit down with the book and explore its photographs and commentary that I was able to take the full measure of it. I was very upset with what I saw, but not for the reasons you might imagine.

Antarctica – TGWis a large format photographic book featuring the work of photographer and environmental activist Sebastian Copeland. But it is not simply a book of photographs. It is openly a strong plea for our awareness of how climate change is affecting this remote yet vital part of our planetary environment. As a photographer with a strong appreciation for nature, and as someone who has visited Antarctica twice in recent years, I eagerly sat down to both view the photographs and also read the text, for my own pleasure, but also with an eye to writing a review for this site.

A short while with the book though made me so upset that I put it aside for days before I could pull my thoughts together enough to write this brief commentary. The reason was that I feel that the photographer, or the book’s sponsors, or the book’s art director or publisher have betrayed both Antarctica and photography itself.

What I am referring to is the fact that that every photograph in this book has been reproduced so that the quarter tones are smashed. What this means is that virtually all tonalities between shadows and mid-tones have been heavily compressed. As a consequence this sometimes glistening, brilliant and crystalline continent is reproduced throughout as if it was constantly at the edge of night. (Virtually every photograph in the book has similar tonalities to that of the cover photograph seen above).

My first thought was that it was simply a really bad printing job, and I considered calling the publisher and asking for another, better printed copy. But as I showed the book to others, and examined it more carefully I realized that indeed this was a deliberate "look". Someone – be it at the creative or the production stage, wanted the photographs in this book to appear stark, somber and distressing.

Now, as photographers we all editorialize. How we frame and compose an image as well as how we prepare it for print or presentation is in fact an editorial process. It’s what we do. But, I feel that this always should be done with a regard for the integrity of the subject. One can take a photograph of a beautiful woman in an ugly pose or light and make her look bad. One can take a photograph of a junk pile, and with the right framing and light have it appear appealing. This form of editorializing has been part of the visual arts (not just photography) since people started paintings mastodons with overly large tusks on cave walls 20,000 years ago.Look at how brave and powerful I was to have killed this great beast.

But, in the instance of this book someone has used the ability to alter images to create a synthetic visual impression of Antarctica that does not accord with reality. Rather, it is intended to create an impression attuned to the book’s political agenda, which is that Antarctica is in crisis as a consequence of climate change.

Indeed it may well be. I have been to Antarctica twice in the past three years, and even over that short period of time I have seen clear indications of the effects of climate change. Expedition staff on my ships who have been visiting Antarctica for years make it very clear that they too see such change, and it’s occurring at an increasing rate. The visual as well as scientific evidence is there for us to see.

There is some very powerful photography in this book. But literally hundreds of photographs with the same bleak tonal values create a highly biased representation. Antarctica does not typically look the way that it is depicted inAntarctica – TGW. It is simply not that stark, dreary and foreboding. Yes, it can be at times. But it can also be brilliant, sparkling and inspiring. Unfortunately this book through its highly manipulated tonal rendition of hundreds of otherwise compelling photographs shows nothing of the sometimes transcendent beauty of this crystal continent.

If you would like to see and photograph for yourself what Antarctica isreallylike, you may wish to join my third Antarctic photographic expedition, now scheduled for mid-January, 2009. Details still need to be firmed up, but it will be a 12 day voyage down the Antarctic Peninsula, crossing the Antarctic circle. Aboard will be some of the world’s leading photographic educators, just as on my previous expeditions.

My previous Antarctic workshops have sold out almost immediately after announcement, so if you would like to be placed on the wait list for pre-announcement sign-up (no obligation), pleasedrop me a line, putting the wordAntarcticain the email’s title. I expect to have full details and to begin registration by this November.

This may be my last Antarctic voyage, so don’t miss out this time.