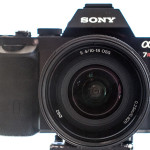 Lower-cost options for avoiding the WATE The Sony a7R is receiving plenty of well-deserved attention since its announcement in mid-October. As prototypes appeared in selected hands (such as Michael Reichmann’s), “first-impression” style reviews quickly followed (e.g., Sony Alpha 7R Hands On right here at the Luminous-Landscape). Production cameras were released in November, … END_OF_DOCUMENT_TOKEN_TO_BE_REPLACED

Whether you're shooting with a DSLR, Compact System Camera (CSC) or large sensor interchangeable lens video camera, you probably have discovered two things about lenses. Those that are designed for still cameras are far from ideal when used for cine work, and lenses designed for cine work are very expensive. Why Still Camera Lenses Aren't Ideal for CineOptically, as long as … END_OF_DOCUMENT_TOKEN_TO_BE_REPLACED

IntroductionWhen the Dutch representative of the Zeiss lenses asked me whether I am interested in testing the Zeiss Touit 12mm lens, I immediately agreed. Zeiss is a legendary name in lens design and I was interested to see the first models of the new line of autofocus lenses for the Fujifilm X series and Sony Alpha NEX mirrorless system cameras. Most of the reviews that I … END_OF_DOCUMENT_TOKEN_TO_BE_REPLACED

A History LessonThe Four Third format is now ten years old. The last Four Thirds (FT) camera to enter the market was Olympus' then flagship, the E5, launched in 2010. But two years prior, in 2008, the Micro Four Thirds (MFT) format was introduced, sounding the death knell for the Four Thirds format,  its progenitor.  The difference between the two formats comes down … END_OF_DOCUMENT_TOKEN_TO_BE_REPLACED

by Mark Dubovoy Mount Whitney SunriseLeica M 240, 50 mm. APO Summicron ASPHWhat if..... I believe that many of us have periodically wondered what would happen if management of one of our favorite photography companies told the design and manufacturing engineers to make the best product they could, with no constraints and no restrictions.  In other words, no cost … END_OF_DOCUMENT_TOKEN_TO_BE_REPLACED