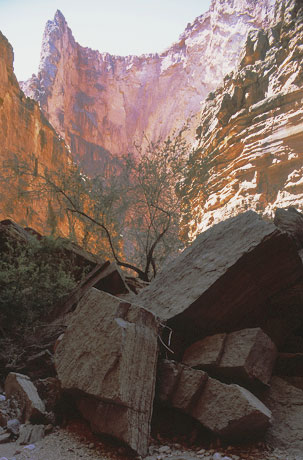 At Mile 148 liesMatkatamiba Canyon. An extremely difficult hike up a narrow river cascade lead us to a gentle amphitheater where everyone relaxed after the climb. At the recommendation ofC.C. Lockwood, the trip’s photography guide, a couple of friends and I hiked further up the trail and came upon this stunning mid-morning vista.

While I accept the fact that many of the locales in the Southwest that I shoot in have been photographed extensively, I’ve never seen photographs from this location before. It was very exciting to be doing photography in an almost unknown location.

I wished for a large format camera but because of the remoteness and difficult terrain there’s no way that I or most any photographer could have made it to this spot with a view camera. The perspective controls of the Canon tilt/shift lens though, which was used for this image, were extremely helpful.

The use of a split neutral density filter would have greatly helped to tame the extreme contrast range, but because of the difficulty of the climb to this location it had been left behind in the raft, many hundreds of feet below. Nevertheless Provia 100F proved itself capable of holding sufficient detail both in the shadows and the highlights of this image.

If you are interested in digital techniques a Tutorial on how to do
Blended Exposuresusing PhotoShop uses this image as an example. 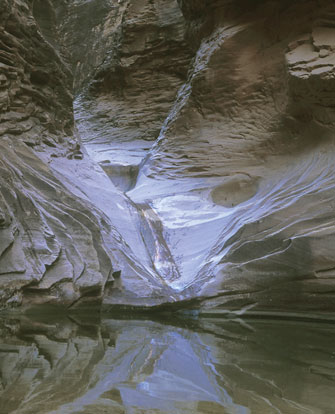 Just past Mile 116 liesElves Chasm, an aptly named section ofRoyal Arch Creek. This site was reached via a tricky and wet climb though narrow canyons, often in waist deep water.

IfFrodohad walked out from behind a rock, I wouldn’t have been surprised. 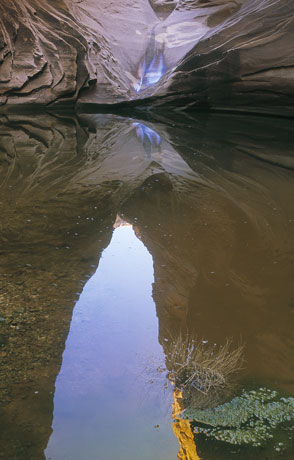 One of the advantages of doing this trip with a group whose orientation is photography, is that in locations such as this the taking of photographs takes priority over playing in the water. Only once the few of us (only 4 or 5 out of a group of 28) were finished shooting would the rest of the group be able to do what we all wanted to do anyhow‚ escape from the 100+ degree heat by jumping into the pools of water.

This photograph is of the same water shoot and pool as the one above, just taken from further back and with a wider lens. The 24mm’s tilt function was use to create a very deep plane of focus. 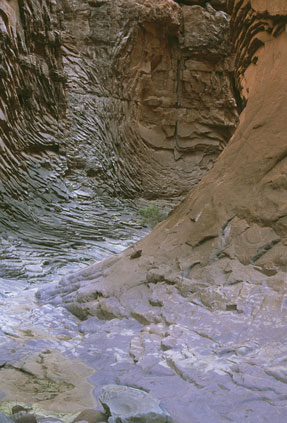 The hike up throughElves Chasmwas completely mesmerizing. If it hadn’t been for a desire to see what was at the end, and the knowledge that we had a finite amount of time to explore this area, I could have spent the entire day doing detail studies like the one above. 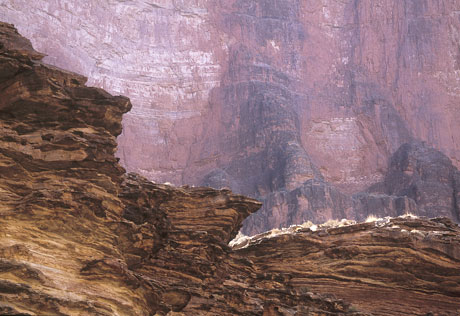 Each day of the 8 day trip we would spend 4-5 hours rafting down the river; sometimes drifting sometimes motoring. Vistas such as this were common, particularly early in the morning when the warm light suffused the rock with glowing colours.

The Canon Image Stabilization technology allowed even a long lens (here, about 300mm) to be used from the moving raft. 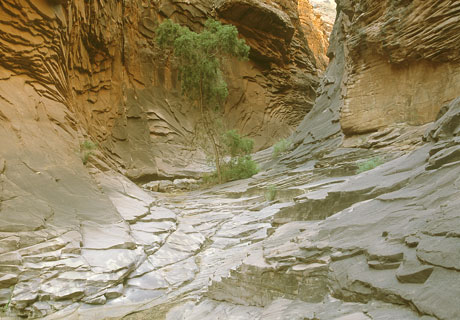 Though the Grand Canyon is for the most part a desert landscape thereisvegetation, and sometimes it’s in the strangest places. This wash clearly has enough water running through it to support a large tree, yet not so much during  flood conditions as to knock it over.

Though it looks deserted, I had to wait quite a while for everyone in our party to pass though this spot on their way to a waterfall higher up the canyon.