Color photography, especially color printing has always been a challenge. Photographers as renown as Ansel Adams have felt intimidated trying to produce worthy color prints of their work. Many sought refuge and remained in the safe world of B&W through out their career. The digital darkroom has given every photographer who so desires the power to print accurate, easily reproducible color prints of their images‚ assuming of course that they possess an understanding of human color vision.

The Nature of Light

Light is the basis of all photography. Without light, we are all left in the dark. But what is light? Light it turns out is a form of electromagnetic radiation (EMR), fluctuations of electric and magnetic fields which move through space as waves move over the surface of a pond. The electromagnetic spectrum includes radio waves , infrared, visible light, ultraviolet, x-rays and gamma rays.

Scientists classify EMR by its wavelength, the distance between two consecutive crests of a wave. Human eyes it turns out are only sensitive to the range that is between wavelength 780 nanometers and 380 nanometers in length. A nanometer is one billionth of a meter. These are very tiny waves! This very special area is called the visible spectrum or visible light. Most color photography deals only with the visible spectrum.

Wavelength of colors in the visible spectrum

In order to see a color print or anything for that matter, we must place it under a source of illumination. There are several common effects that are used to produce this illumination.

Solids or liquids heated to 1000 degrees K in temperature or greater emit light. K is short for Kelvin, the absolute version of Centigrade scale. Water boils at 373 K, so 1000 K is very hot! The tungsten filament light bulb is the commonest man-made source of light on earth, it glows at about 2854 K. The sun, is a natural incandescent source whose surface is at about 5800 K.

Phosphors are substances that absorb energy and re-emit light. The phosphor coating of a common florescent tube emits visible light when excited by energy released within the tube. An electric arc between the tubes electrodes creates ultraviolet light which excites the phosphor causing it to glow.

The Nature of the Object

The color we perceive an object to be is determined by which wavelengths of light are absorbed or reflected by the object. Only the reflected wavelengths reach our eye and are seen as color. The leaves of most common plants absorb red, orange, blue & violet . At the same time they reflect all the green wavelengths and are therefore seen to be green in color. These characteristics of the object are referred to as itsspectral reflectance.

The Nature of the Human Eye

The human eye is the last link in the chain of color vision. The human eye has a simple two element lens. The cornea is the front or outer element and the lens is the back or inner element. The amount of light entering the eye is controlled by the iris which lies in between the two. The light passes through a clear gel called the vitreous humor and creates an inverted image on the retina at the back of the eyeball . 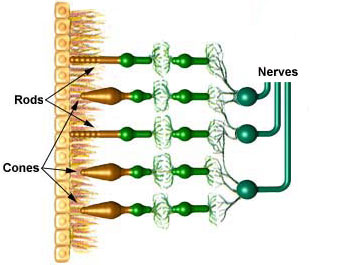 The rods are sensitive to very low levels of light but are monochromatic and cannot see color. That’s why at very low light levels, humans see things in B&W.

Spectral sensitivities of the red, green and blue cones.

To make the eye “see” any color of the spectrum it is only necessary to stimulate the three types of cones in a manner similar to the way the actual color would.

It is not necessary to actually produce the color of light! This is exactly how a CRT monitor works on a computer or TV. If you look closely at the face of your TV with a 4x loop you can see the individual RGB color phosphor stripes glowing. A color TV or computer monitor is reallynot a color device at all, its aRGBsource of illumination. When you back off to a normal distance the eye combines the red, green and light and is fooled into seeing the whole color spectrum. Most color file formats used on computers, store the individual color data in exactly this way. For each point of light or pixel in an image a 24 bit binary number is stored describing the exact amount of red, green and blue making up the pixel.

Objects which are seen because they reflect light from another illuminant source are explained by the subtractive color system. Color prints fall in this category. The color perceived by the eye while looking at a color print depends on all three factors discussed above‚ the spectral power distribution of the light source, the spectral reflectance of the object and the spectral sensitivity of the eye.

In a color print, you control the spectral sensitivity of the paper at a given point when you adjust the color balance while looking at the image in Photoshop. The light source the print is viewed under is often out of your control and can be a problem. Certain pigment based inks appear to be identical under light sources of one type, say 2800K tungsten filament sources. The same inks viewed under a different light source, say 6500K daylight appear very different. This phenomena is called metamerism and is a problem for Epson 2000Powners.

When taking a photo, the spectral power distribution of the illuminant is even a bigger problem. Standard color films are either balanced for daylight or a tungsten light source. Anything in between, will require color adjustment in the digital darkroom for accurate color. 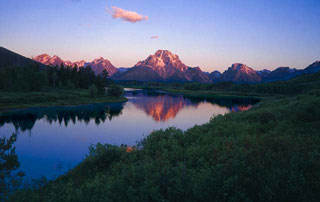 It is quite possible the artistic effects created by color shifts are highly desirable. Not many of us would want to trade the warm hues of sunset or sunrise for an accurate set of whites! Once we understand the nature of color, it is possible to control it. There are many color tools in Photoshop that allow you to do this, but that is the topic of yet another tutorial.

Miles J. Heckeris currently Chair of The Division of Technology & Trades at Casper College located in Casper, Wyoming.  Mr. Hecker has taught digital electronics and electronic imaging at Casper College for 25 years. His hobbies include photography, climbing, caving and running.

Mr. Hecker is the co-fooming.under of WyoPhoto, a web site which is dedicated to Wyoming and Rocky Mt. landscape and nature photography.

Mr. Hecker graduated from The Cooper Union for the Advancement of Science and Art in 1971 with a Bachelor’s degree in Electrical Engineering. He also holds a M.Ed. in Science Education from the University of Wyoming.

If you found this interesting you might also enjoy my article on formal colour theory.

See all articles by Miles Hecker

Woman in a Window