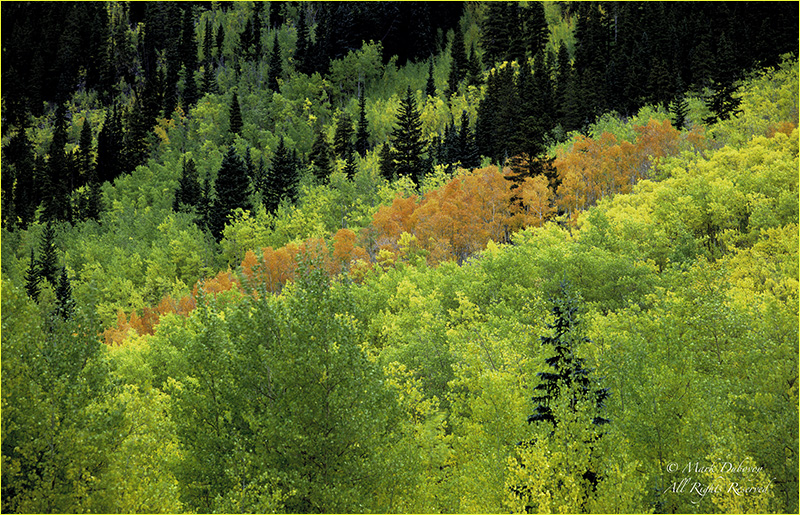 In a prior article on this site I reviewed my findings that after searching for the ideal methodology to produce the best possible inkjet prints I had settled on using ColorByte ImagePrint 8 with an Epson 9900.

Of course, the world never sits still, and alas, ImagePrint 8 is not compatible with Apple’s latest operating system OS 10.7 Lion.

I am sure this is frustrating to Apple users, but do not despair, there is a new version of ImagePrint that will be released in the next few weeks.

The new version of ImagePrint (ImagePrint 9) is not just a regurgitated version of the old software that is Lion compatible, but it is truly the next generation product.

I have been working with different beta versions of ImagePrint 9 for several months.  I have given the company some feedback based on testing the product during this time, and I am pleased to report that they have been extremely responsive in fixing bugs and have been very receptive to some of the changes I recommended.

As the product solidifies and the date of introduction draws near, it is time to report my experiences with the new product.

Please be aware that all my descriptions refer to the beta version I am using as of this writing, so a few changes between now and the final product introduction are inevitable. I expect these changes to be relatively minor.

Before we continue, a disclaimer is in order:  It is important to note that my relationship with ColorByte is strictly as a user.  I did not receive any remuneration for testing the beta product and I have no commercial relationship with the company. 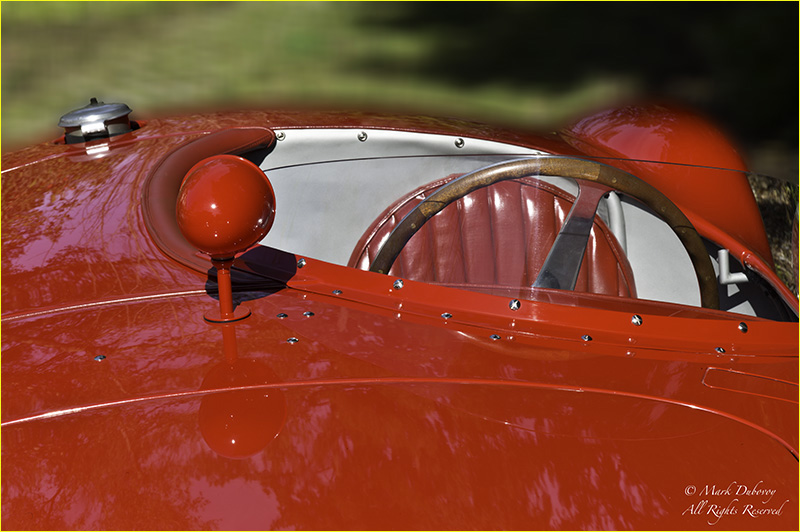 As I mentioned in my prior review, the user interface of ImagePrint 8 is not very pretty.  It works just fine, but it is strictly utilitarian.  The current beta version of ImagePrint 9 represents a significant improvement in the user interface.  It is still strictly utilitarian as opposed to beautiful or glitzy, but it is laid out in a more logical way, it is much easier to understand by those who have not used the product before and the functionality has been improved.

I did have a couple of conversations with the company about having a really attractive user interface such as the ones for Lightroom or Aperture. The company’s response was that it is quite expensive to develop such a GUI and they prefer to spend their money and use their resources to enhance the product and the profiles database rather than make the interface prettier.  I must say that upon thinking about it, I am in complete agreement with the company. It is difficult and expensive for a small company to produce these kinds of GUIs, and frankly, for the type of product we are talking about it is really not necessary.

So, without further ado, I will address the key new features of the product:

The single most important change to the UI is the Dashboard.  Screen shots of the Dashboard are shown in figures 1 and 2. 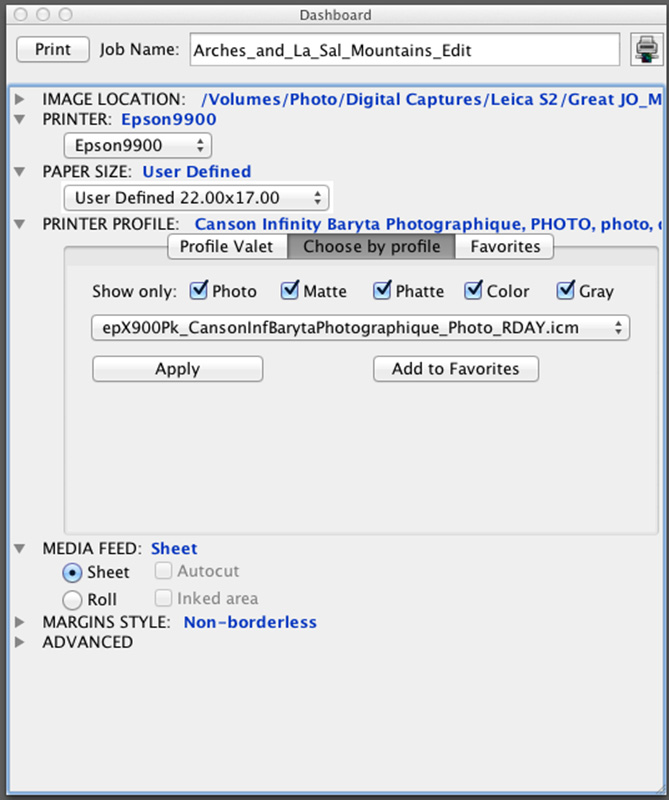 The Dashboard showing some of the available functions.

Figure 1 shows some of the available functions in the Dashboard. You can locate an image using the new browser straight from the Dashboard and you can see the thumbnails of your images as you navigate to a specific location in a separate pane, you can pick a printer, you can define the paper size, the Media Feed and the margins, select a profile and even initiate printing by clicking on the print button.  Notice the profile tabs.  In this image I chose to show the “Choose by profile” tab, which allows you to pick the profiles that will be offered to you.  In other words, if you are interested only in color profiles with Photo Black ink, you would check only those two boxes and all the profiles that are not meant for color with Photo Black will not show in your choices.

The “Favorites” tab is straightforward, you save your favorite or your most used profiles in that tab.

In Figure 2, the Profile Valet is shown. 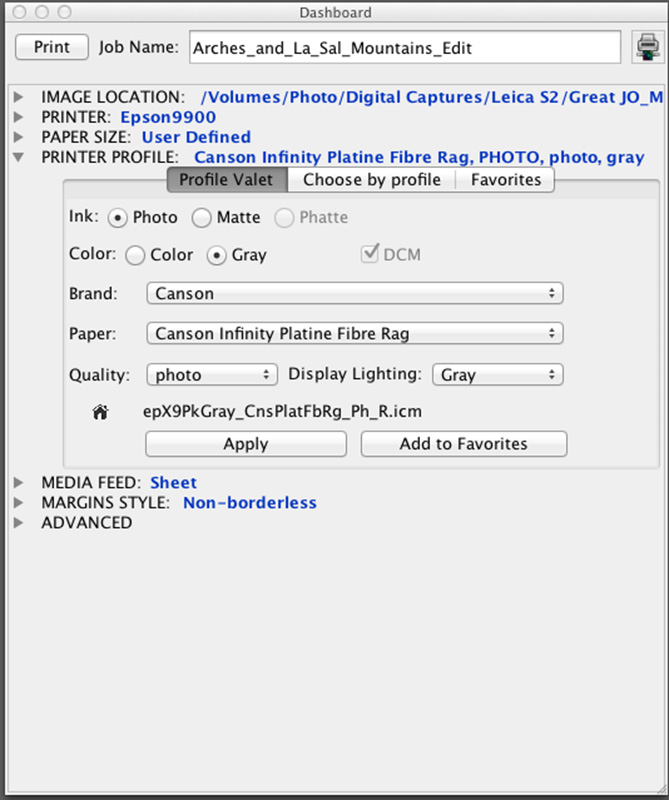 The Profile Valet is a wonderful way to access and manage all the profiles that ImagePrint has available to its users.  You simply pick the type of profile you are looking for by your choice of ink, color or B&W, brand of paper, type of paper, viewing illumination, etc. Finding the right profile is extremely easy and takes only a few seconds.  Clicking on the “Apply” button immediately downloads the profile from the ImagePrint database that I am told currently contains over 27,000 different profiles (!).

The download also takes only a few seconds and you are ready to work with the profile.  Once you have downloaded a profile, you do not need to download it ever again.  You can simply Apply it.

Users of prior versions of ImagePrint will immediately realize that the Dashboard is a great way to consolidate in a single panel many of the separate tools in previous versions of the software, and that the Profile Valet is far superior to the old way of finding and downloading profiles by launching a separate application (Profile Manager).

I rarely print B&W, so I have to defer to experts on the subject like George DeWolfe who in his excellent recent article on this site entitledB&W Master Print expresses his conviction that using ImagePrint produces B&W prints that are as good or better than any other inkjet methodology.  Furthermore, ImagePrint is much more convenient to use versus other competing methodologies.

This is not at all surprising to me, since ImagePrint definitely produces the best inkjet color prints I have ever been able to make, and the B&W tools are excellent.

In the past, ImagePrint had a Narrow Gamut set of tools allowing the user to simulate split toning of a print with outstanding results.  The tools allow a deviation of 3 delta E from neutral, which practically everyone will find to be more than sufficient.  The Narrow Gamut tools avoid the pitfalls and artifacts one can encounter when trying to tone an image using image editing software: Often times things look great on the screen, but no so good on actual prints.

Figure 3 is a screen shot of the new Narrow Gamut tools superimposed to an image in the main pane.  The image is split into four zones from black to white. Note the position of the markers for each range of tones. A marker in the center of a square is neutral. Note the beautiful toning of the image achieved by simply moving some markers. The slider at the bottom allows you to perform a final contrast adjustment. 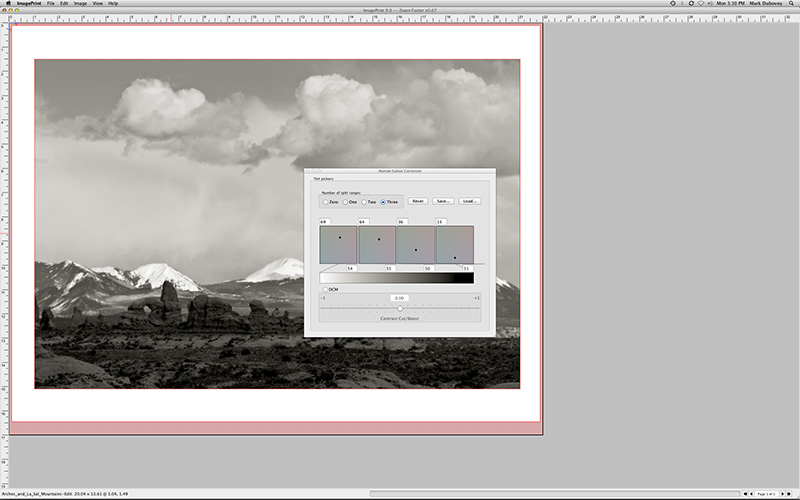 New to ImagePrint 9 is a set of Wide Gamut adjustment tools.  These allow subtle to extreme variations with essentially no constraints for those adventurous souls that like to take things to extremes and do not mind getting into trouble or discovering something new while doing it. Figure 4 is a screen shot of these new tools using the same image as above as an example. Again, look at the position of the markers; in this case I chose a more extreme adjustment than in Figure 3.  I actually do not like this adjustment, but I think it is useful for illustrative purposes.

I should caution the reader that using strong variations in these tools can lead to trouble in the final print.  As is usually the case when using digital tools, it is all about finesse as opposed to brute force. 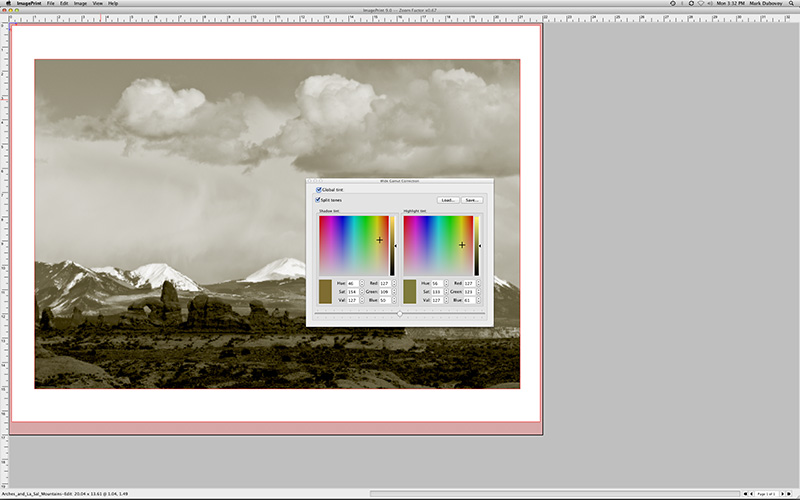 There are other changes and enhancements to the menus and some of the other well known tools, like the spool manager, but I believe the improvements are less dramatic than the ones described above. 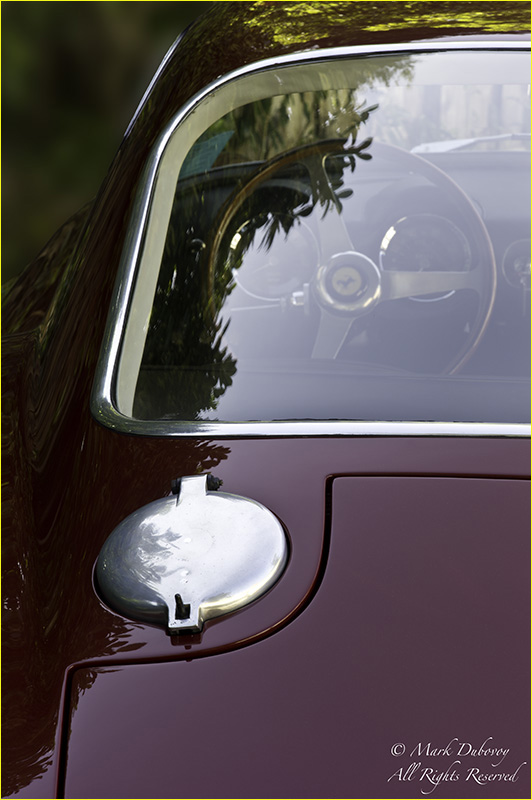 The printer driver has been completely re-written for ImagePrint 9.  I can see a subtle but definitely noticeable improvement in the quality of my prints using version 9 versus version 8.  I have also found that ImagePrint 9 spools faster to the printer, so I am getting better prints faster.  It is all good.

My expectation is that now that the UI has been improved, and the product is compatible with the latest operating systems (a Windows version will be available also), ColorByte will figure out a way to further improve image quality.

ImagePrint 9 is a welcome evolutionary improvement to a product that in my experience was already the ne plus ultra for producing the best image quality in inkjet prints.

I am delighted to have a better user interface and some new tools, as well as enhancements to the old tools.  I am even more delighted to see a subtle improvement in image quality.

I will obviously be one of the first in line waiting to download the final release.