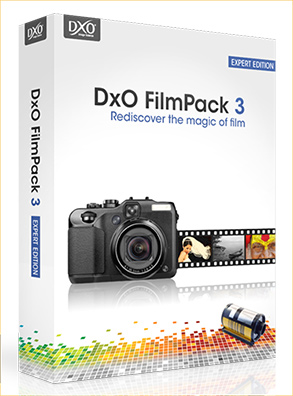 Now that we are more than a decade into the digital era, and very few people are still shooting with film, the universe of photographers seems to have formed into three camps.

– Those who used to shoot film, and still have some nostalgia for it.

– Those who never shot film in the past, but who are curious about its “look”.

– Those who don’t give a damn about film or how it reproduced images.

Each is a unique perspective, and there’s no objective right or wrong with any of them. But wherever there is a potential market niche available someone will inevitably fill it. On November 15, 2011DxO Labs introducedDxO Filmpack 3.1. This slightly updated version has 25 new creative looks and several UI enhancements. The new looks are under a separate tab from the color and B&W film looks and include several vintage effects and film-inspired filters that expand on FilmPack’s library of film emulations. The UI enhancements include screen views, hot key undo and redo, and variable sizing for the “film strip” of thumbnails showing the looks available.

But, what is Filmpack , and why should you care?

Into The Valley of Choices 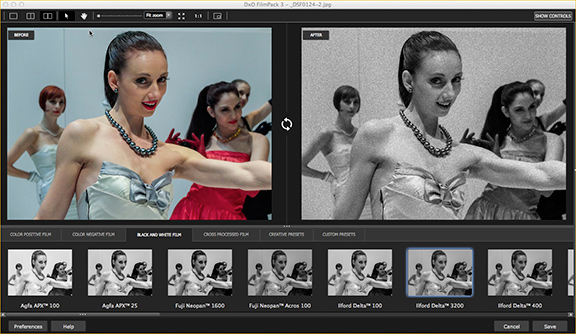 Though I fall into the first category above; someone that shot both B&W and colour film for many years, I am really not that nostalgic for it. I know film pretty well. I shot with dozens of types and brands over the years, did my own processing in both B&W and colour (C41 and from E2 to E6), and subsequently spent more time breathing toxic fumes than is likely healthy.

Do I miss film? No, I can’t say that I do. Not only do I not miss the fumes, the stains, the mess and the bother, but I also don’t miss the dust spots, occasional processing streeks, and inevitable scratches. Oh, and did I mention dust?

Well then, how about the “look” of film? Oh, you mean the grain? Or, do you mean the fixed palette that each particular emulsion offered and which took a great many rolls and many hundreds if not thousands of dollars in stock and processing to become familiar with. And, then when you really thought that you had a handle on the differences between Provia and Velvia , or Ilford Pan X and Agfa APX, you found that you had the wrong roll in the camera for the shot waiting in front of you.

No my friends, I do not miss film. Not in the least. Shooting digital I have the ability to capture a file that I can then produce in colour or B&W. In colour I can alter the palette to just about any flavour that my mind can imagine, and in B&W I can change the tonal values or tint to whatever matches my creative fancy. I can even produce multiple interpretations if the mood strikes or if there is a commercial requirement.

But, I appreciate that there are people who may have shot a particular type of film and who may be nostalgic for its “look”. There also are those who never shot film, but are fascinated by the various looks that film provided and who want to experiment with them. Finally, there are those who don’t give a damn, who I assume are no longer reading this report, so we can forget about them. 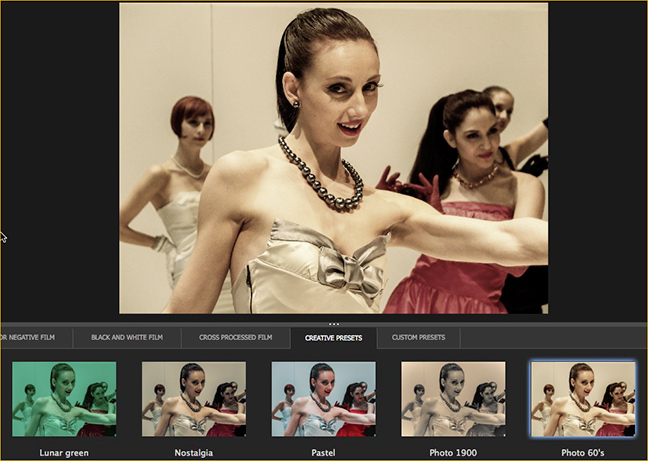 This isn’t a full review of Filmpack 3.1. Not even close. The reason for this is that there are already numerous review of FilmPack 3 online, and also the program can be downloaded for a free 30 day trial, so you can easily check it out for yourself. There is also a sale on until Dec 24 should you decide to make a purchase.

I’ve been using a beta version of 3.1 as a Lightroom Plug-In for several days, and I have to say that it’s been a fun experence . In addition to being a stand-alone it can be launched as a plug-in from within Photoshop , Lightroom , Aperture, and of course DxO Optics Pro.

What I find fascinating is that DxO has not just tried to emulate a huge number of colour and B&W films from a visual perspective, but their colour rendering is based on colorimetric measurements of the actual emulsions. DxO has also extracted the precise “film grain matrices” directly from test images.

In addition to these there are some Creative Presets which simply provide a quick and efficient means of generating a specific canned “look”, if you find one that appeals to you. 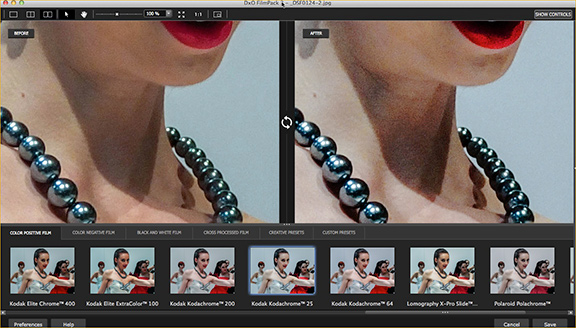 I am left with two lasting impressions after spending time with FilmPack 3.1. The first is what a truly brilliant job DxO Labs has done on recreating the look of a huge number of B&W and colour films. They really are to be commended for this.

My second impression is to once again confirm how truly poor film based imaging is / was compared to todays’ digital capture. Using a variety of images I went through every available colour transparency and negative emulsion looking for one that appealed to me more than the original processed with my usual workflow . Not a single one even came close.

In B&W it was more a matter of enjoying seeing the different panchromatic interpretations that various emulsions produced. Frankly though, I’d rather use the B&W Mixer controls in Lightroom or Camera Raw to achieve the tonal balance that I want. Similarly, grain if desired, is easy to add.

Of course if an emulation of a specific current or historical film emulsion is ones goal, thenDxO’s Filmpack 3.1will be the best way to achieve it. I urge you to download a 30 day trial and explore what it has to offer. That is, everyone except those that don’t give a damn about film. They can just carry on as before.

That's the usual dictionary definition. But, I want to extend the meaning somewhat. I don't think that a bias simplyinhibitsimpartial judgment, I believe that it