In mid-August, 2009, I was invited to join a small group of journalist on a visit with Leica at their headquarters in Solms, Germany. The purpose was to preview two new cameras, the M9, S2. We were able to spend time shooting with the S2 and M9 and also had unprecedented access to Leica’s executives, product development team, and engineers over a three day period.

As for the X1, because it won’t be ready to ship till later in the year, we only had the opportunity to handle them at Leica’s headquarters, but not to shoot with one.

One of the other photographer / journalists on the trip to Leica was Sean Reid ofReid Reviews. I urge you to visit Sean’s site and read his perspective on this camera. His is a subscription site, but his camera and lens reviews are among the best in the business, written by a working photographer rather than a technologist.

My Leica X1 first impressions are featured below.

What It Is, and What It Isn’t

Firstly, the X1 was and is a surprise. We had gone to Solms expecting the S2 and M9, but on our second day, with devilish grins on their faces, Leica’s executives showed us several prototype X1s. We all laughed with pleasure at seeing them, because the previous day we had been commenting on how what the world needed was a smaller and less expensive M, or maybe a larger sensored pocket camera. It appears that Leica themselves have been thinking along these lines because the X1 is intended to be a response to both requests. 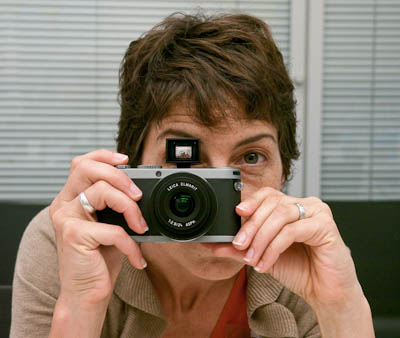 There is a pop-up flash, the camera shoots raw (DNG) as well as JPG, comes with Adobe Lightroom 2.4, and it will be priced at about $2,000. The X1 will ship before the end of the year.

The photograph below, which I took during the show-and-tell in the meeting room at Leica, shows the X1’s size relative to the M9 and the DLux-4. It’s obviously smaller than the M9 and somewhat larger than the DLux-4, particularly in terms of thickness. My shot above of Leica Product Specialist Amy Kosh holding the X1 gives a better idea of the size – pocketable, but only in a large pocket.

One performance aspect that was very impressive during our brief demo was the shooting speed. I didn’t count the FPS, but it was damn fast, with a seemly large buffer. 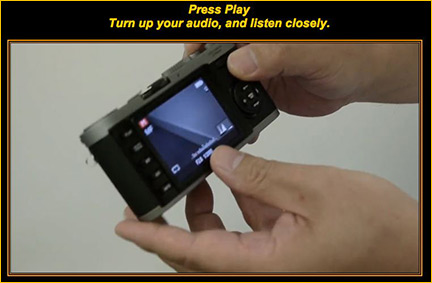 There isn’t that much more that is known or can be said about the X1 at this time. Of course once it ships I’ll have a field review on these pages.

But it might be worthwhile to put the X1 in perspective with regard to its competition. This means large sensor cameras with fixed lenses.

As of Summer 2009 that includes the Sigma DP2. Period.

But to my mind the competition also includes the Olympus E-P1 and Panasonic GF1. Both of these have somewhat smaller sensors, though vastly larger than any other pocket cameras currently on the market. They also have interchangeable lenses, which can even include Leica M glass, especially lenses of 50mm and longer, which work especially well on Micro 4/3 cameras.

The EP-1 is hindered by its poor AF and clumsy controls, though it’s otherwise a serious competitor to the X1, and of course it has interchangeable lenses. The Panasonic GF1, on the other hand, looks to be the X1’s real competitor, with fast AF, interchangeable lenses, and an optional electronic viewfinder. We’ll know more soon.

Of course the proof is in the handling and the IQ comparisons, none of which will be possible until the X1 actually becomes available in early December.

And – who know? Maybe there’ll even be another contender in the ring by then.

Discover Antarctica February 10 - 18, 2019 A Photography Discovery Expedition Since 2005 Luminous-Landscape has been leading photo trips to Antarctica.  There is something about