Owners of DSLRs with CMOS sensors may not consider it a big deal, but CCD chips, such as those used in medium format backs, have (until now) had difficulty with long exposures. And by long exposures I’m not talking about minutes. I’m talking about seconds, and in many cases even large fractions of a second.

No, this is not hyperbole, as owners of some MF backs will confirm. A second or two has been the limit for many, and a few even start to get blotchy and noisy at anything more than 1/4 second. But, that was then, and this is now. With the P45 the magicians at Phase One in Copenhagen have pulled a rabbit out of a hat, in this case a long exposure rabbit.

When I purchased my P45 (an upgrade from a P25) my dealer told me that one of the improvements that Phase One had made was in long exposure times. This was confirmed by my friend Kevin Raber, Phase’s US VP Sales and Marketing. He told me that the factory was claiming that exposures of as much as30 minuteswere possible.

Needless to say, I had to try this for myself. On the first day of owning the P45 I set up a shot of the bookshelf across the room in my office, turned off all the lights in the room except my monitors (3 of them) and made a 20 minute exposure. 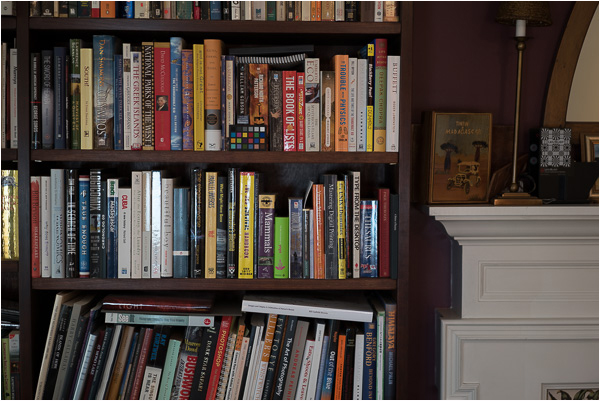 The above is a 100% crop of a 20 minute time exposure. Not 20 seconds.20 minutes. I have seen medium format backs turn images to gravel after a two second exposure, so one that can handle an exposure 600 times longer is nothing short of extraordinary.

Anyone trying such long exposures should be aware that they will take their toll on battery life. The best way to do these therefore is to shoot tethered via Firewire, so that the computer is powering the back, rather than using the back’s internal battery. A part of this equation is also that the P45 uses dark frame subtraction, which requires the same length of time processing the image in the back as the length of the exposure. So for each minute of exposure there is a minute of in-back processing before the file is written to the card or to the hard drive. For this reason alone shooting tethered for such long exposures is the preferred approach, since a dead battery before the final saving of the file to the card would mean a totally lost exposure.

Be aware as well that the back will become warm during such long exposures. This is unusual for a Phase One P back because they usually run very cool, but I am told by the factory that no harm is done.

Update:
After this test was done, but before it was published, Phase One released Version 2.0.4 of the P45’s firmware.
They claim that this produces even higher quality long exposure. The moonlit landscape below was taken with the new firmware.

Since the first frameabove has had no noise reduction or sharpening either in Capture One or Photoshop, I have applied an automatic mode noise reduction with theNoisewareplug-in, and a normal amount of Input and Output sharpening usingPhotokit Sharpener,to show what a typically processed file would look like. Remember that this is a tiny section of the file, and that the full image would print at 22X30" at 240 PPI, and 75 X 100 inches at this screen resolution. That means that it would require a screen 8 feet wide to display the full image at this magnification.

Somehow I never got around to doing any real-world long exposures with the P45 until my trip to Namibia in early April ’06. But one evening atWalwadens, as I was preparing to go to bed, I was standing on the ground level porch of our room and decided that this would be a good time for a long exposure test. It was a lovely evening, at about 9:25pm, and with a full moon high in the sky. The sun had set four hours earlier, so that other than for the moonlight it was very dark. The nearest artificial lights, other than those of our rooms, we at least 200 Km away.

Above is the metadata for the shot which is seen below. As you can see the exposure time was 645 seconds; just over 10 minutes. It’s not the most thrilling photograph, to be sure, (though maybe a bit more so than that of my bookshelf), but what it shows is the performance of the P45 using the latest firmware revision. 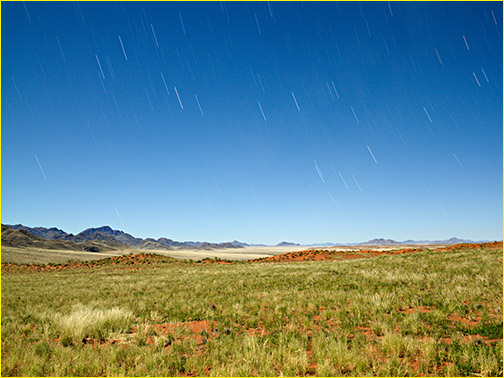 Below is a 100% crop from the frame above. It has had standard sharpening applied, but no noise reduction, either in C1 or Photoshop. You can click on the crop below to see a version that is actual size. 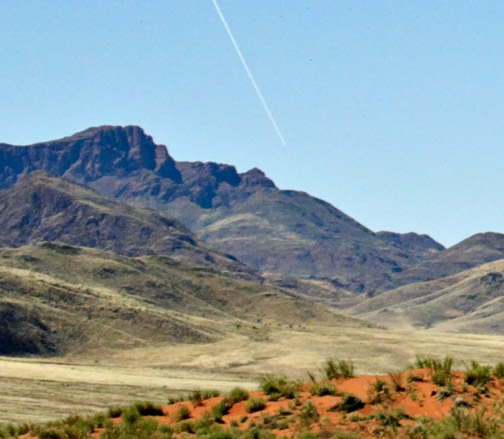 I wish that I could show you more, and especially more interesting really long exposure shots. But unfortunately the next morning I hada failureof the one lens that I had with me for my Hasselblad system, and both my shooting and testing with the P45 came to an end. At least for that opportunity. I plan on doing more in the weeks ahead, and when I do I’ll update this article. I’m dying to see what a one hour exposure looks like.

Some readers may consider this whole topic academic. In the real world, they may say, who does such long exposures? Well – a lot of photographers, actually.

Consider the architectural and lifestyle photographer shooting interiors under natural light. I’ve done, and seen done, exposures of many minutes on this type of assignment.

Consider as well the photographer using flash. Flash? Yes, flash, when multiple pops are used with the shutter left open. In this very common case, often done both on location and in studio, an assistant will walk around the set or location with a flash, popping off and illuminating segments of the scene. A very powerful technique. But even though the individual exposures may be 1/500 sec or shorter, the shutter is left open, sometimes for minutes while the various pops are executed.

With film this is a non-issue, since only the flash exposures count. But when using this technique with digital noise accumulates based on the total time that the shutter is open, not just on the length of the flash duration.

Having said that, and before everyone decides that film is still king, consider that film suffers from reciprocity failure, which digital doesn’t. So a 10 minute exposure might actually require 20 minutes to get the right density. But, since dark frame subtraction provides a similar limitation we’re left with a draw. There’s room for both, especially now that backs like the P45 are capable of extremely long exposures coupled with extremely high image quality.

In early January, 2001 my wife and I went to a retreat in theBlue MountainsofJamaicafor a break from the harsh Northeast winter. I had plans