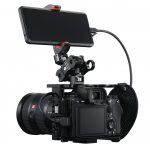 Sony’s Alpha A1 – 50 MP stills and 8K video… Sony and Fujifilm released important new camera bodies the week of January 25, 2021. Both flagships, Sony’s Alpha 1 and Fujifilm’s GFX 100S, are expensive cameras that few of us will buy (although each has a market niche among LuLa readers) – but they show us something about where the market is going. Fujifilm ALSO released a … END_OF_DOCUMENT_TOKEN_TO_BE_REPLACED