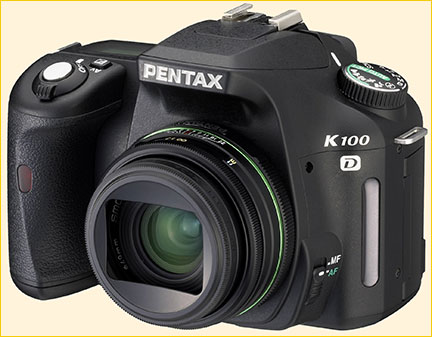 A year and a half ago on this site, I wrote a paean to thePentax. (I use the term "the Pentax" advisedly; once upon a time back when men were men, "the Pentax" meant "the picturetaking tool," much like "Tannoys" meant "loudspeakers" long ago in England.) I compared the then-new *ist DS to the old K1000. The latter was to photography much like a wooden-handled, medium-weight curved-claw hammer is to carpentry.

I should have waited. "*ist" was not a dumb camera name, but it played one in public. It actually made sense, in a sophisticated sort of way, and at least it was different. But it was unsearchable, and unpronounceable, and had, um, other defects. Pentax eventually acknowledged the error of its ways. For its latest basic DSLR, it went back to history, and chose "K100" (a.k.a. K100D). Obviously, the reference was to the K1000, and just as obviously, Pentax intended its new camera to deserve everything that came to anyone’s mind about the workhorse K1000 heritage.

I recently got a chance to try a sample of a production K100 for a few days. I did less shooting with it than I usually do for a full-bore camera review (note to Pentax: send reviewers larger cards!!), but, without going too far into nit-picking, pixel-peeping detail, what I think we have here in the K100 is a good, solid, basic, entry-level DSLR intended to compete with a) other manufacturers’ entry-level DSLRs and b) anything above about a mid-level "prosumer" digicam. It’s a small, light, well-designed, and well-put-together little camera in the general mold of a Nikon D70, Canon Digital Rebel, and Konica-Minolta 5D. As with all entry-level DSLRs, it presents with a number of inherent limitations. Like other entry-level DSLRs, it’s obviously meant for light to moderate general shooting in good to medium-poor conditions. Like other entry-level DSLRs, it’s intended for people willing to look at its somewhat limited high-ISO capability, modest buffer depth, and wee tiny viewfinder in comparison not to higher-level DSLRs, where it suffers by comparison, but to digicams, in which case they will be pleased and impressed. As I don’t have to remind photographers, everything depends on perspective.

I said that that K100 competes with the Canikon low-end DSLRs, and it does, although in a slightly different way than you might be thinking. Point-for-point, feature-for-feature, the Canikon offerings (especially now that the D80 and 400D have come traipsing along) pretty much mug the poor Pentax (except for one thing, which I’ll get to in a minute). But they don’t murder it, for one reason: price. Whereas the 400D and D80 will set you back $800 and $1k, respectively, the Pentax K110 (without anti-shake) and K100 (with anti-shake) go for a mere $520 and $620 respectively. That’s getting into almost actually really honestly cheap territory…not just affordable for adigitalSLR, but affordable period.

True, Nikon now does bracket Canon’s Rebels with the more upmarket D70s (now D80) and the more value-oriented D50, which goes for a mere $550, body only. But here’s where the Pentax’s one big winning feature comes into play: for only $70 more than the D50, it’s got in-the-body anti-shake.

Anti-shake is a virtual tripod. It doesn’t substitute for high ISO speeds in that it won’t stop action; it simply allows you to hand-hold pictures for 1 1/2 to 3 stops into what used to be tripod territory. It’s up to you to decide what that’s worth for you, but there’s no denying that Canikon, which puts their anti-shake into individual lenses, are making plenty o’ coin with this increasingly popular technology. With the Pentax K100, you don’t need to spend any extra money for the feature: you’ve already got it. And we’re not talking tiny driplets of extra money here: Canon’s new IS version of its 70-200 ƒ/4 lens will cost something like $500 more than the non-IS version of the same lens. And that’s just one lens. With the K100, you’ve paid just $70 (if compared to the D50) or $100 (relative to the K110) for your anti-shake.

Clouding the comparison is the fact that Canon’s image-stabilization in the 70-200mm is probably more effective than Pentax’s in-the-body implementation. Still, penny for penny, you’re getting a lot. To get anti-shake in the body from any other manufacturer, you have to go to the $1k Sony A100 – admittedly a better camera, but also one that’s in a quite different price category.

In use, the K100 is totally, completely…okay. It won’t blow you away. Neither will it frustrate or dismay you. In fact, you may end up appreciating its tough, cheerful, scrappy can-do character. It’s good-looking and very ergonomic for a very small SLR – a nice, clean, sculpted design – and feels solid and well constructed within the parameters of the "light to moderate" usage I was talking about earlier. Although it’s light for a DSLR (or even for an SLR), it feels heavy because it’s so small.

Especial care seems to have gone into the interface. It’s not so different than most other DSLRs, which are starting to standardize in terms of controls, but the K100 is admirably straightforward, simple, and easy to use. It appears to have had its controls and input parameters designed and refined through actual use – that is, in the course of actual picture-taking by actual photographers. Its controls are arranged with economy and solid common sense. I especially liked the fast and easy LCD zooming.

I compared the viewfinder to my friend Scott Hill’s Konica-Minolta 5D, and found that the K100’s viewfinder is very slightly smaller and very slightly brighter. It’s thus typical of its (woeful) genre, but (like the 5D) on the good side of typical.

The only other things I noticed are that shutter lag is good, and that shutter noise is fairly high but has a crisp, clean sound that implies precision and contributes to the camera’s subjective sense of responsiveness.

On the down side, you might have a hard time adjusting to the exaggerated colors of the LCD screen. The screen itself is large and, at least compared to my K-M 7D, very bright, but the colors are so zappy they’re almost day-glo. I don’t judge color from the LCD, since I only shoot RAW, but JPEG shooters might have some trouble adapting. And I only had my sample K100 for a couple of days, so I never got around to finding out whether you can choose to tone down the display. I hope so.

So the upshot of my brief experience with the camera, and my appraisal of its situation in the current market, is that it tags along behind the Canikon category leaders offering – quite fairly – less for less, but, when called upon to compete head-to-head, it slaps its only direct competitor, the D50, smartly upside the head with its bargain anti-shake.

Apart from that, and price, is there any reason to choose Pentax?

Well, yes, there’s one. It won’t be decisive for many newbies, and old-timers won’t need me to tell them about it. It’s that you can use any Pentax lenses ever made on it. Auto-stopdown lenses (Early 1970s SMC-K series on) are fairly easy to use, too – there’s just one step added to the shooting sequence, in that you use the AEL to stop down to shooting aperture. Once you get used to it, this is fast and easy compared to some of the kludgey shooting sequences you have to go through on other cameras when you use modern bodies with old lenses (if you can do so at all). It’s probably not my place to suggest this, but even people who don’t own a single Pentax lens right now might find it rewarding and economical to mix’n’match optics of different eras for various purposes. For instance, you could get a full-function FA (AF) prime for your walk-around lens, and complement it with a few old manual-focus telephotos and even an off-brand K-mount superwide for tripodded interiors. If you shot Canon, by contrast, you’d have to shell out for EF or later lenses for every little thing you want to do, because they’re all that will work on Canon DSLRs. Canny Pentax buyers could get a lot of photographic functionality for thousands less if they were willing to do some lens research and spend some time hunting for lens bargains. (Note: this is only an advantage for people who actually want to take pictures.)

Also, in terms of optics "native" to the DSLRs, Pentax makes a few lenses nobody else does. With the K100 I used, I was sent a new DA 21mm ƒ/3.4 pancake lens. This is a lens after my own heart: a high-performance prime in a highly portable package. It crossed my mind that it might be worth getting a K100 just to use this lovely little lens all the time. But maybe that’s just me.

FacebookTweet  The goal of this educational series is to provide inspiration on how you can successfully transition your photography into cinematography.  Often, when photographers start