Understanding The Art of Cropping 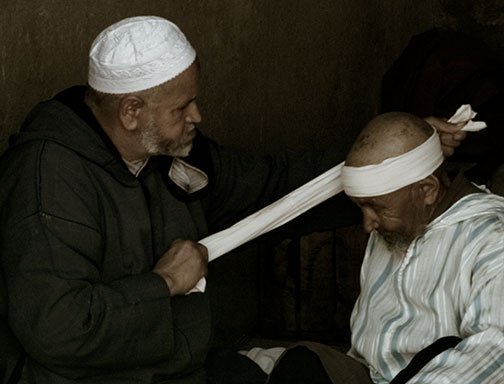 An old saying in photography has it that – “If your photographs aren’t good enough, it’s likely because you aren’t close enough“. This is often misunderstood to mean that one should be shooting with a long lens, or just doing close-ups. Not so. What is meant is that any photograph is of necessity about “something”, and it is the photographer’s task to hone the image so that it contains, to the greatest degree possible, only that which the photograph is intended to be about.

There is an apocryphal story that one day the Pope came to visit Michelangelo in his studio while he as sculpting his “David”. The Pope marveled at the partially completed work, and asked, “How do you know what to cut away?” Michelangelo’s response was, “It’s simple. I just remove everything that doesn’t look like David.“

The trick, or rather – theart, is, of course, not in simply removing everything that doesn’t look like David, but in knowing both what that is and how to do it. Therein lies our story.

The Tyranny of Formats

Cropping this frame to a very wide aspect ratio removes those parts of the image that don’t
contribute to the story – 12 woman waiting in front of a medical clinic.

In 1924 theErnst Leitz Companyintroduced the first 35mm camera, which had been invented a few years earlier byOscar Barnack. In developing the camera Barnack had taken a roll of 35mm motion picture film and turned the image area sideways, doubling the format width. Thus was born the 24X36mm format which we have become all too familiar with over nearly a century.

Go to the movies and you’ll see a wide variety of formats on screen, as you also will on your new wide-screen TV. Visit an art gallery, and you’ll see painting, etchings, lithographs and silk screens in formats from squares to circles to extreme panoramas. In China and Japan traditional scroll paintings are done in the form of extreme wide aspect ratio horizontals as well as verticals. And yet, there are photographers who insist on only printing their image “full frame”. In other words, maintaining the supposed sanctity of the manufacturer’s aspect ratio. Then there are those who insist on printing exclusively to match standard paper sizes.What are they thinking?

In January 2007 I published an essay onstreet photography in Marrakechwith the new Leica M8. To my amazement there were some people online who criticized me, wondering publicly why I had cropped many of the shots to an almost square format,wastingsome of the camera frame’s real-estate. I was flabbergasted with amazement.

This was in fact the impetus for this article, since it was all too clear that there are some people involved in photography who don’t have a clear idea about the nature of cropping – why one does it, and how it can lead to stronger more communicative and more meaningful images.

There is no magic bullet when it comes to cropping. It is an esthetic decision and therefore will be based solely on the photographer’s creative judgment. Nevertheless, there are usually factors which can be considered and discussed somewhat objectively. 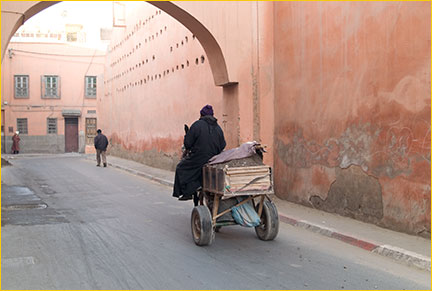 Figure 1above was taken just after dawn at the Medina wall in Marrakech. This shows the raw file with no processing. I had just turned the corner and saw this scene, with a donkey cart receding, and two distant figures.

On reviewing the frame my first thought was that I wished I’d had the time and forethought to include the complete archway. But, as I explored the image I saw that this wasn’t necessary. The real story here was the cart and driver, and the uncluttered simplicity of the wall and street. No cars, no street signs. no parking meters. This shot could have as easily be taken in 1207 as in 2007. (The rubber tires give it away, but you see what I mean). 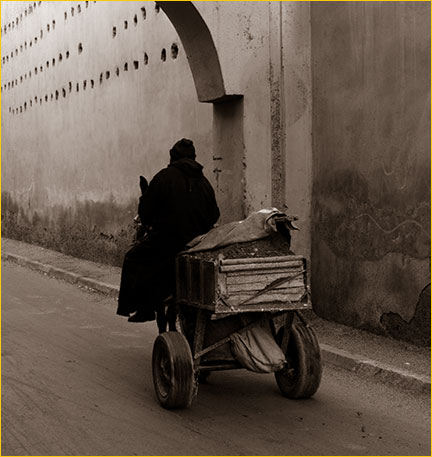 With this simplicity of form in mind I cropped the frame to try and achieve a balance between the cart, the wall, and the archway. Anything that wasn’t about the wall and cart was removed. This lead to an almost square aspect ratio – but so what? This is what the shot wants to be. I also converted it to monochrome, and toned the image to provide an additional feeling of timelessness. 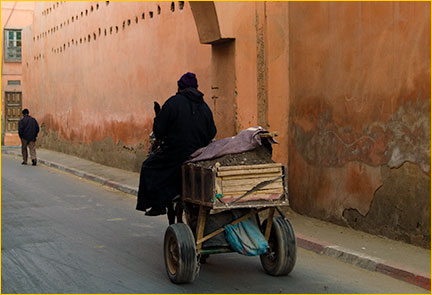 In planning this essay I returned to this image and explored other possible croppings and treatments. Above, in Figure 3, I explored including the second man in the distance. I also included a bit more of the street and wall behind the cart, though the cropping would have also worked with less blank wall to the right of frame. Having it this way though lets the line of the curb become a strong diagonal, leading the eye across the composition. I am less happy with the cart consequently being almost centered, but it does provide some balance because of its dark tone transitioning to the lighter tonalities of the left of frame. 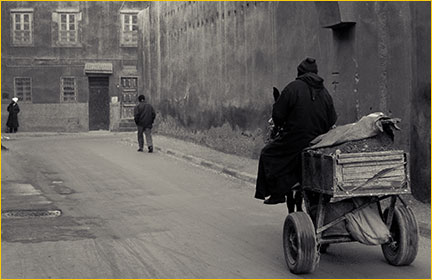 Figure 4 includes the third person standing against the far wall. It is also the least cropped, and therefore closest to the original framing and aspect ratio of the frame. The context of the image is now more open and less abstracted. We see that it is a street with a definitive end, unlike inFigure 2which is much more graphic, but being less literal doesn’t have as much context. I also abstracted the tonalities even further in an approach that tries to make the image seem from an earlier time – something like the feel ofJosef Sudek’sPrague images.

In each instances a somewhat different interpretation caused by cropping (as well as, of course, some image processing techniques) has produced quite a different photograph. Whether one is more successful than the other is a matter of taste. My preference is still my original interpretation as seen inFigure 2, but the others have their merits, and in fact are preferred by some viewers. Such is the nature of art.

What is The Image About? 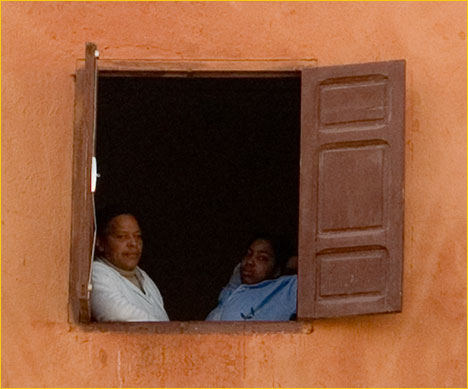 When I provide print critique sessions with students on my workshops and seminars, the first question that I ask is – “What is this photograph about?” I often find it remarkable when the photographer doesn’t have a clear concept of this.

When looking at a new raw file of my own the first thing I ask myself is that question –What is this image about, and what do I want it to say about the subject? Only when I have a satisfactory answer to this can I proceed to crop and otherwise interpret the image. When this is in hand I then find it easy to arrive at a cropping, because as with Michelangelo’sDavid, I simply remove everything that isn’t relevant to my conceptualization.

Sometimes there is no clear answer, and I then have to honestly ask myself whether the shot in question is worthwhile. More often than not, it isn’t. It’s only when all the pieces hang together and an image makes a clear statement, that it’s worthwhile pursuing on-screen and then in a print.

My feeling is that cropping isn’t something that we do to an image. It does it itself – demanding to be constrained in certain ways. Sometimes there’s more than one way, but it eventually becomes obvious what the photograph itself wants. This isn’t metaphor. The best photographs demand to be a certain shape. The rest make no such requests, and that’s what separates the winners from the also-rans.

Photography and The Death of Reality

“Reality leaves a lot to the imagination.” – John LennonHey, I know that title is a bit dramatic, but for my first article here on The