A Test Report by Jonathan Sachs

Fuji Velvia and Provia 100F are two of the most commonly used films for professional quality landscape and nature photography. Soon after its introduction a number of years ago, Velvia became the film of choice for many professional landscape photographers because of its high resolution, fine grain, and saturated colors. With the recent introduction of Provia 100F I decided to test it as a successor to Velvia from the standpoint of the quality of digital images scanned from the film. Since Provia 100F is rated somewhat paradoxically as having finer grain than Velvia but lower resolution, it was not clear which film would produce more detailed scans.

I compared images scanned from each film with respect to several criteria:

Dynamic range‚ the range of subject brightness that the film can capture without loss of shadow or highlight detail.

For the purposes of the test, I photographed two rolls of each film (one 35mm and one 120), developed all the film identically usingTetenal E-6 Chemistry, and finally scanned the resulting transparencies using anImacon FlexTight Photoscanner which has an optical resolution of 3200 dpi.

I used the following test subjects:

Resolving power was not significantly different between the two films when scanned at 3200 dpi., although the Velvia test target seemed to have more contrast.

The sky samples were fairly close, but Provia 100F definitely produced a smoother scan of blue skies. A tiny section of sky was scanned at 3200 dpi and then sharpened heavily twice in succession. The resulting images showed Velvia skies scan with more texture than Provia 100F. 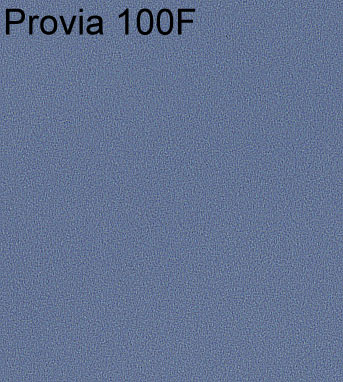 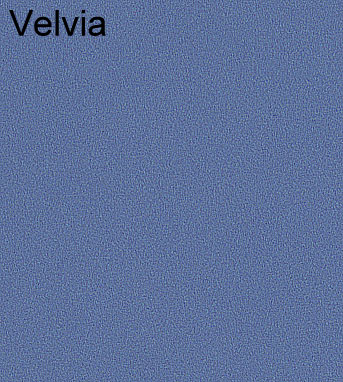 Velvia was more saturated and also rendered neutral grays as more neutral. Provia 100F had a slight yellow cast. I don’t know if this was just the batch of film I used, an artifact of the chemistry I was using to develop the film, or if this is an actual property of the film itself. Since color casts are easily removed digitally and saturation can also easily be either enhanced or reduced, I don’t count this as an important factor

In addition to its obvious advantage of being one stop faster, Provia 100F is also a little less contrasty than Velvia, thus affording some welcome additional exposure latitude. Once again, you can always increase contrast digitally, but once there is loss of highlight or shadow detail, there is no way to get it back.

The bottom line is that if you want to scan your film and manipulate it digitally, Provia 100F is superior to Velvia in nearly every important category. Those areas where it falls short are relatively easy to remedy by a little digital post-processing.

Jonathan M. Sachs, age 52, is president ofDigital Light & Color  located in Cambridge, MA, a software development company he founded in 1993. For the last ten years, Mr. Sachs has been developing software to help photographers enhance their images by computer. For part of this period, Mr. Sachs also served as a software consultant to Eastman Kodak.

Mr. Sachs is a strong advocate for the environment and, in 1985 he founded the Sachs Foundation which has funded land preservation efforts in New England and Central and South America. Mr. Sachs has served on the boards of the Wilderness Society and the Conservation Law Foundation and has worked closely with The Nature Conservancy and World Wildlife Fund.

Mr. Sachs graduated from the Massachusetts Institute of Technology in 1970 with a Bachelor of Science Degree in Mathematics. He is married and resides in Cambridge, Massachusetts.