Has the sameness of everyday photography got ya down Bunky?  Bored with the lenses that you’re currently using? Does that 21mm super-wide of yesteryear seem a little tame these days?

Well, have I got a lens for you! 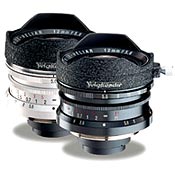 VoigtlÃƒ¤nder, a name from the past, has reemerged during the past couple of years and has brought forth a number of interesting new cameras and lenses. These include three Leica lens compatible cameras, theBessa R,theBessa Land theBessa T. They have a large assortment of fascinating and reasonably priced screw mount lenses available as well.

These bodies and lenses are actually made byCosina, a Japanese company that does a lot of OEM manufacturing for various brand-name companies as well as selling product under their own name. They have obtained the venerable pre-WW2 Austrian photographic equipment maker’s name and have applied it to this new range of rangefinder cameras and lenses. I have theBessa Twhich I use exclusively with the 12mm Heliar and which I havereviewed elsewhereon this site.

The lenses in theVoigtlÃƒ¤nderline offer users on a budget an alternative toLeica’sexpensive glass, and frankly the lenses look to be much better made than the bodies, (though theBessa Tappears to be somewhat better made than the previous two bodies). This is fortunate becauseCosinahas not heretofore been noted as one of the makers of high-end gear. It looks like the labeling of this new line with the historicVoigtlÃƒ¤ndername is an attempt to elevate themselves into a more refined strata. The lenses at least appear to make this not unbelievable. 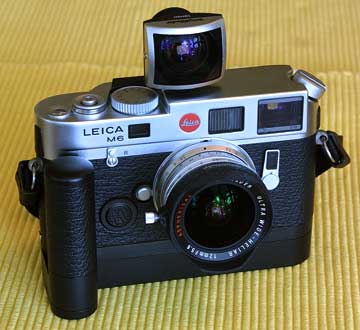 This lens can cover 121 degrees horizontally. This is the widest rectilinear coverage of any lens ever made for a 35mm cameras. Anything this wide until now has always been a fisheye. (For a comparison with other 35mm wide angle lenses, seeBattle of the Ultrawides).

Because the lens is designed for a rangefinder camera it doesn’t have to deal with the long image throw retrofocus design needed to work on an SLR. Having only an f/5.6 maximum aperture also makes this a much smaller lens than its slightly narrower14mm f/2.8SLR competitors; the 14mm lenses fromCanon,Nikon,TamronandSigma. (Indecently, this same ultra-wide angle of coverage is also available in medium format with a Horseman SW612, a 6X12 back and the Rodenstock 35mm Apo-Grandagon f/5.6 lens.)

It is comprised of 10 elements in 8 groups, with one of the surfaces being molded glass aspheric. TheHeliarcomes with a Leica screw mount, just the thing for use on a pre-war Leica, or a contemporary Bessa body. But, with the addition of an relatively inexpensive screw to bayonet mount adaptor it can be used on any M series camera.

Built quality appears to be very good. This is a metal, not a plastic lens and materials and workmanship are first rate. Not what one usually expects from Cosina. Not quite Leica quality, but quite fine indeed. Aperture click stops are positive and there are even click stops on the focusing ring at certain pre-set positions, simplifying zone focusing. This lens does not couple to the Leica’s or the Bessa’s rangefinder, because depth of field is so huge as to render fine focusing moot. There is a small lever attached to the focusing ring, which is a nice touch, and the lens comes with a metal lens shade which firmly attaches with a thumb screw.

The lens also comes with a shoe-mount viewfinder. Given how hard it is to make a really good wide-angle viewfinder, I’m impressed. The case is of all-metal construction, and with the eye centered there is excellent coverage and definition.

This is not your father’s wide angle lens! It makes a 20mm lens look like a telephoto. This means though that this is not a lens for everyday application. In fact, while it’s exciting to use, creating worthwhile images with it that aren’t "gimmicky" is going to be tough.

At f/5.6 and f/8 it vignettes pretty seriously, and even stopped down further vignetting is a serious issue. (Seebelowfor more on this.) All wide angle lenses vignette somewhat and usually improve considerably when stopped down. The Heliar does improve slightly, but dark corners are going to be a way of life with this lens unless a center filter is used. As for sharpness, contrast and other image quality criteria, a handful of rolls of film isn’t yet enough to render a firm judgment. It’s decent, but not in Leica ASPH territory by any means. Again, I’ll have more to say and more examples as time passes. 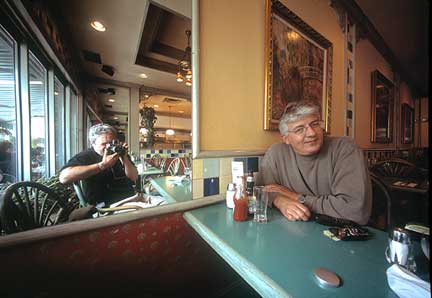 This was one of the first photographs I took with the 12mm Heliar. My associate Chris Sanderson, the Producer and Director of theVideo Journaland I were just finishing lunch on the day after I first received the lens.Of courseI had to take it to the restaurant with me.

The shot was hand held (as you can see) using a 1/4 second exposure. If you look at the enlarged version you’ll see that it really is remarkably crisp. The edge fall-off is nicely hidden by the subject matter. You should realize that Chris was not more than 2 feet away from me across the table, yet the feeling of spaciousness is quite remarkable. Even though he is near the center of the frame there is still a moderate amount of perspective distortion, but of course you can see how this becomes further exaggerated toward the edges of the frame by looking at the lens cap on the table right in front of me. This really is a round, not an egg-shaped lens cap. 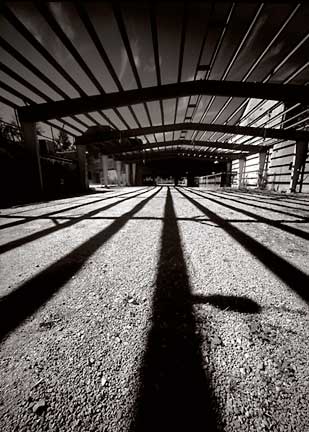 This shot is part of a new series that I’m working on called theUrban Landscape. The photograph was taken the first day I started using the 12mm Heliar. The ground in front of me is about 12 inches away yet depth of field nicely extends to infinity. The corner vignetting is clearly visible, though not too severe since the lens was stopped down to about f/11. (The sky darkening was due to the use of only the red channel inChannel Mixerin Photoshop).

In the weeks and months ahead I will display additional photographs taken with the12mm Heliarand will point out here any that form part of other portfolios on this site.

The 12mm VoigtlÃƒ¤nder lens and its sibling the 15mm Heliar both require the use of their provided auxiliary viewfinders. Both also need to be held absolutely level for the horizon line to not end up bowed in your photographs.

Many ultrawide cameras and lenses ship with a viewfinder that contains a bubble level. The viewfinder for theHasselblad 30mmlens, for example, has a bubble directly inside the viewfinder.

VoigtlÃƒ¤nder has taken a different approach. They make available a bubble level (about $105 from Robert White), and also a double shoe adaptor for another $53. 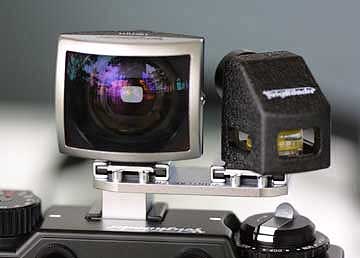 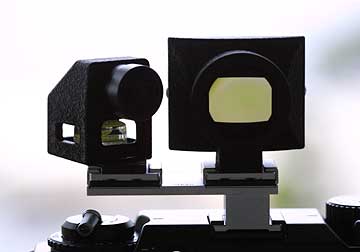 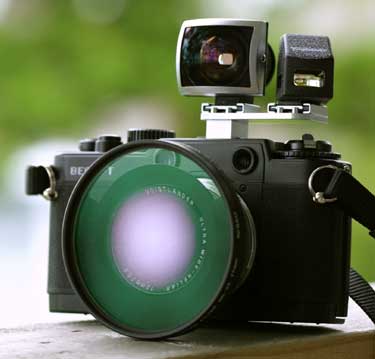 It’s a law of optics that all lenses vignette somewhat and very wide angle lenses vignette quite a bit. The 12mm Heliar is no exception. Ultrawide lenses traditionally reduce this through the use of center filters. Some people, particularly those working in B&W, tend not to be overly concerned about vignetting. In some cases it enhances the look of certain images. I intend using this lens for certain urban-environmental as well landscape applications in colour, and therefore need to find a solution to the vignetting problem.

VoigtlÃƒ¤nder has created a 77mm adaptor ring for the 12mm Heliar, (expensive at approx $75). It replaces the supplied lens shade and permits the use of any 77mm filter without cutoff. Quite nicely designed, and as you can see it even features a cutout for the viewfinder window.

This makes possible the use of a center ND filter but raises a couple of issues. The first is that this makes the lens slower by 2 stops, (f/11 instead of f5.6).  Since this camera will be used mainly hand-held this is a deterrent, though not unmanageable. The second issue is that there is no center ND filter made specifically for this lens.

I have a center ND filter which came with myFuji G617camera and its 150mm lens. Using it on the Heliar does a very nice job of eliminating the vignetting. Cosina does not currently offer such a filter but companies likeHeleopanmake them available, though at high prices.

Photographed with a VoigtlÃƒ¤nder Bessa-T and 12mm Heliar on Provia 100F with Fuji Center ND filter. Converted to Duotone in Photoshop. SeeThe Midwayfor more from this shoot.

Here isa linkto the US distributor’s web site where you can find more information on theVoigtlÃƒ¤ndercamera and lens lineup.

As always, it pays to shop around. List price is about US $1,000 and US mail-order dealers are selling the lens for around $800 > $900. But, with a little shopping you can find it for less.Robert White, for example, a reputable UK-based dealer whom I’ve dealt with numerous times, has it for under $700.

Chris Groenhout ofApogee Photo Magazinehas the only other on-line review of the12mm Heliarthat I’m aware of at this time (July, 2001). Links to others will be added here as I learn of them.

The 3/2001 issue ofLeica Fotograrafiemagazine has a good review of the Heliar 12mm.  Their conclusions are quite similar to mine.

I’ve owned and used M series Leicas for some 35 years. For many of those years I made a living as a photojournalist using anM2andM3. My commentary on the latestM6 TTLcamera and the lenses and accessories that I’ve selected for it can be foundhere.

Contax Gowners will be pleased to learn thatZƒ¶ erk, that estimable designer and manufacturer of weird and wonder lens adaptors, now has a conversion of both the 12mm and 15mm Heliars available for the Contax G.

According toJoshua Danielswho is handling direct sales and marketing for ZÃƒ¶rkendorfer in the US, the conversions require a reengineering of the mount – no adapter solution is possible. The original mount is removed, and replaced by a custom machined G mount. This is rather time-consuming, and in addition each Heliar is shimmed for proper infinity focus.   The end result is said to be impressive: a very OEM feeling conversion, plus, TTL metering (which you have to use with discretion, esp. with large sky areas because of the G’s average metering). Still, an improvement over the 16/8 Hologon.

A test report on the 12mm Heliar appeared in the April, 2002 issue ofPopular Photographymagazine. The magazine described the lens’ performance as "one of the best ever recorded". While I agree that the lens is very good indeed, my experience is that they are typically not very hard markers.

FacebookTweet Michael Reichmann and Kevin Raber have both visited “Silo City” of course (Silo City comfort zone,  Challenging yourself to see different)  and in fact, my

Set-Top DVD Player ProblemsQ:My set-top player refuses to play the disk, even though it plays commercial movies without trouble. What's the problem? (My PC-based DVD