Though the summer of 2000 in northern Ontario has been mostly wet and cool, in late August there were 4 days in a row where early morning conditions were wonderful. Each one found me out in my boat onLake Muskokashooting at sunrise.

Below are photographs from those four mornings. (All images may be seen at a larger size by clicking on them.) 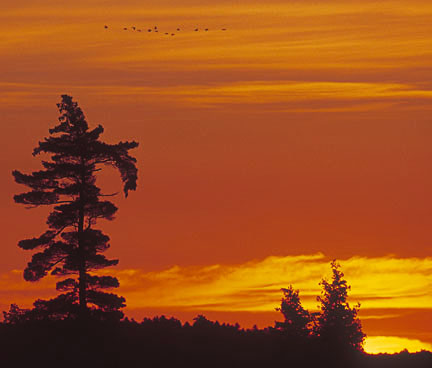 I left my cottage at 5:45 AM — about an hour before sunrise. In the pale pre-dawn light as I motored up the lake toward a spot where I thought I might want to gain a perspective on the rising sun, a flock of ducks flew almost directly overhead. It was a beautiful sight, but no shot.

A while later I reached the location that I’d chosen and was waiting for the sun to rise.  Coffee in one hand, camera and long lens resting at the ready in my lap. As I waited for the sun to appear I idly thought how wonderful it would be if a flight of ducks would choosenowas a moment to fly by.

Seconds later, as the sun first appeared above the horizon, they did. Not as close or as low as I would have liked, but there they wereƒâ€˜ as if they’d heard my thought. I saw no other flights of birds the rest of that day. 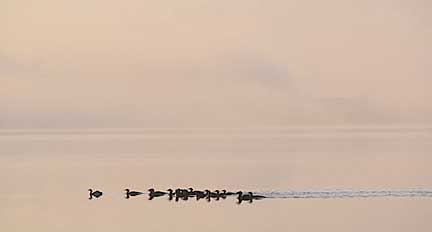 One of the mornings was pale and foggy with mist rising from the lake. These ducks decided to swim around and around my boat as I sat waiting for the mist to clear. Since they were kind enough to keep me company I simplyhadto take their picture. 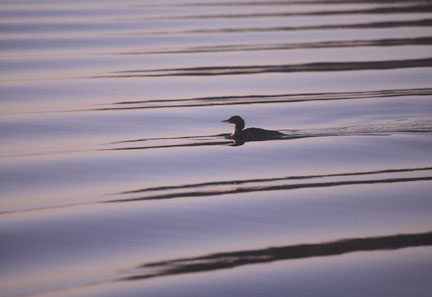 Moments later the fog started to lift and I zoomed to a longer focal length to isolate the lead bird and the ripples that my boat had caused as I started to pull away. 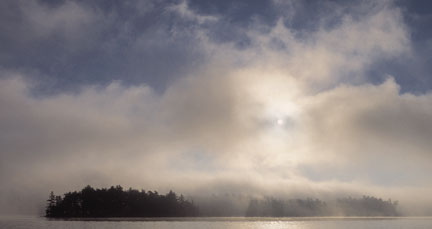 Leaving the ducks behind I cruised further down the lake looking for additional misty areas. A few miles away I found this island shrouded in fog, and watched with pleasure as the sun burned it off just minutes later. 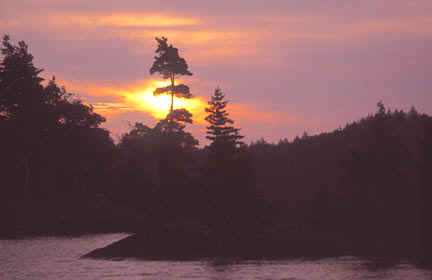 I’m an unrepentant lover of sunrises and sunsets. They don’t always make for great art but even the most modest ones produce great beauty. This particular morning the predominant colour was purple. 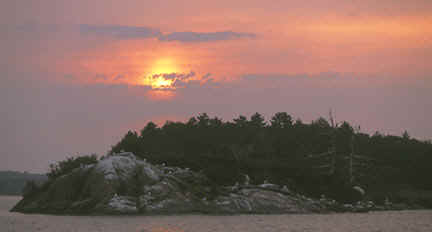 I’ve never before found myself near this bird-covered island at dawn. An obliging cloud bank created a long-lasting sunrise so I was able to shoot numerous variations on this theme. Two of these are shown below. 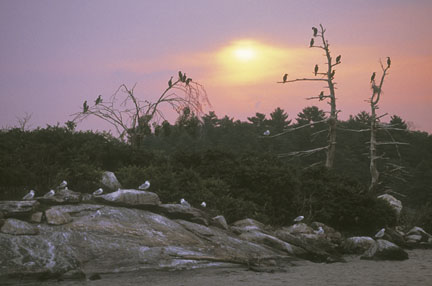 Taken just a few minutes after the photograph above, the mood and colour has changed and as I moved closer the increased light levels make detail on the island more visible. 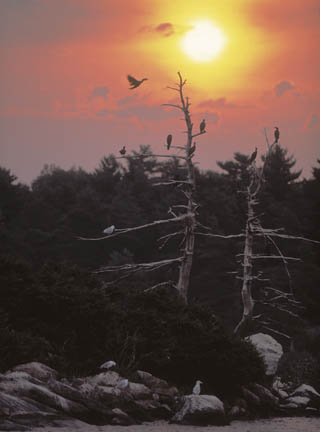 A few more minutes pass and with the lens zoomed out to 400mm the photograph above resulted. This sequence shows how "working" a location can produce several different results.

This photograph is my favourite from the four mornings and now forms part of my permanent portfolio, including becoming August 2000’sFeatured Image. 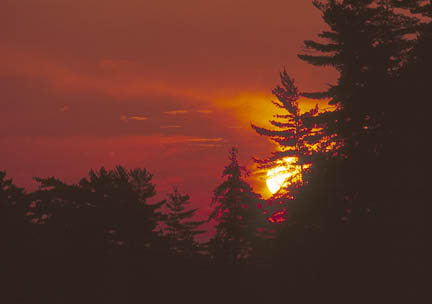 The pine forests of Muskoka create classic silhouettes when framed against a rising sun. The pleasure of shooting from the water is that it’s fairly easy to position the boat for just the framing that you want — something not always possible on land.