Since the dawn of photography photographers have struggled with skies. Much of the time they are flat, devoid of clouds, gray, boring……. you get the idea. What to do?

Many photographers make a habit of shooting interesting looking skies and then later superimposing these behind scenes with worthwhile foregrounds. Most master printers spend hours trying to coax detail out of burned-out skies. Everyone curses those great shots that are ruined, or at least made somewhat less than great, by featureless skies.

For people that have made the switch to the digital darkroom simple techniques like the one described inWhite Sky Bluescan help nature a bit by improving clear skies with a bit of sunrise or sunset colouration.

There is a software program though that can change the way you do photography forever. It’s calledFour Seasons.

Not a bad shot from Zabriskie Point at sunrise, but the sky is disappointing. I guess I wasn’t there on the right day. But, since Death Valley is some 2,000 miles from where I live it’s a bit difficult to drop back on a day with a more interesting sky.

Here’s what I was able to make of it withFour Seasons.

I don’t know about you, but for me this sky makes the shot come alive. Here’s howFour Seasonsmade it possible. 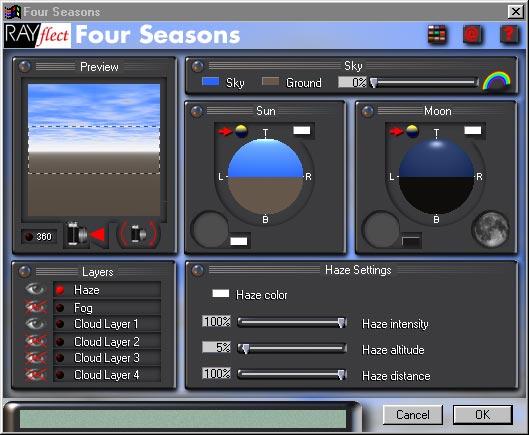 The wayFour Seasonsis applied is by your firstSelectingthe sky area that you want to replace. This is done with theMagic Wandtool, theColor Rangeselection or even the new (V5.5)Extractioncommand. The better the Selection that you make, the more natural the sky will appear. Using theFilterdrop-downFour Seasonsis then selected and the above window appears.

There ismuchmore here than meets the eye. On the left you can see that you can select and manipulate up to four different cloud layers as well asHazeandFogeffects. Each one of these has individually editable parameters, and likeLayersinPhotoShopcan individually be turned on or off.

In addition the colour of the sky, the position of the sun and or moon and more than a dozen other parameters can be individually selected and adjusted. It’s a little like playing god. The program is even smart enough so that if you move the sun position close to the horizon the sky and clouds change colour appropriately. Similarly, when you introduce haze and fog effects these change the “feel” of the light just as they would in the real world. I’ve spent many years in software development and all I can say is that this is a programming tour-de-force.

I could go on for pages about this program’s features, but since it’s downloadable in demo form why not try it out yourself?

The fly in the ointment is you, the user. One has to use extreme restraint when usingFour Seasons. Anything other than the lightest touch and the most subtle effects can be obvious and ugly. Here’s an example. 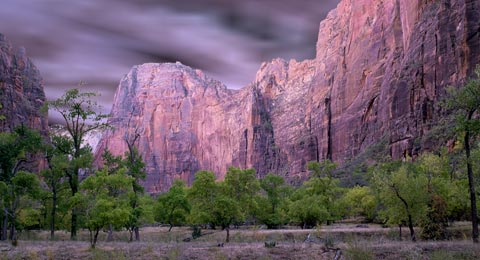 Pretty bad huh? Interestingly the cliffs really were mauve in the pre-dawn light under which I photographed them. No manipulation was done to the colours. The sky is another matter. As I was first learning to useFour SeasonsI figured that a dramatic sky would help the scene. Well, not quite this dramatic.

Like any sophisticated toolFour Seasonscan be used for good or for ill. It’s important that you are sensitive and aware of the direction and color of light in your photograph. You need also pay attention to whether or not the cloud conditions that you create are appropriate for the locale and season in which your photograph was taken. Be creative, but beverysubtle!

Four Seasonsis slow. It is extremely calculation intensive and when working on a large sky area of a hi-res file it can bring your new super-fast computer to its knees. I currently (Nov, ’99) use a 600Mz Pentium III with 512MB of RAM and I’ve had Four Seasons take five minutes or more to create a sky on a 50MB file.

A solution is to experiment using a low resolution version of your file (96dpi), and then when you have the sky that you want reload the high-res file and apply it while you go for coffee.