A Tale of Two Papers 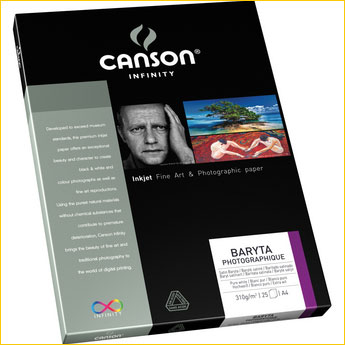 Sorry for the bad literary allusion. Now, with that out of the way, let me start with the caveat that ones choice of printing paper is a highly subjective one. There are many factors to be considered, including surface texture, colour, whiteness, weight, and of course, price and availability. Whether a paper uses matte black or photo black ink is a major consideration, and whether or not the paper has OBAs –Optical Brightening Agents, and how much, is always something to consider.

For the purposes of this review I am going to assume that the reader is a moderately sophisticated printer and familiar with issues related to paper and ink types, as well as whether or not the use of OBAs is of concern.

The two papers under consideration here areHahnemuhle Baryta FBandCanson Infinity Baryta Photographique, both of which just started to become available in December, 2009. Hahnemuhle has been involved in the inkjet paper marker for some years, while Canson has entered only recently, but both are among the world’s oldest paper makers.

Though a newcomer to inkjet papers, Canson has been making paper since the time of Michelangelo. Some of the most beautiful art papers ever made made have been sold under theirArcheslabel (pronounced"Arsh", in the French manner).

I had looked at several Canson Infinity photographic papers during the Fall of 2009. Two that caught my eye werePlatine Fiber RagandRag Photographique. Both are rag papers that utilize matte black ink and neither has OBA’s. I was impressed, though I mostly prefer to print with photo black ink on my 3880 and 7900 Epsons, and so have not yet fully tested them, though I intend to do so in the New Year.

Then I heard about a brand-new paper that had just been announced –Infinity Baryta Photographique. Ilford’sGold Fiber Silkhad been king of the hill, at last in my neighborhood (as well as that of many of my fine art photographer friends), and I wondered if there might be a new pretender to the throne.

A call to Canson requesting a sample lead to some arriving in mid-December, and I immediately set to testing it.

It didn’t take more than printing a single profiling target sheet and a couple of colour and B&W test prints to know that the old king was dead,long live the king. A bit hyperbolic, I know, butIBPas I now call it, has turned out to be the hands-down finest paper that I have ever used, in either the chemical darkroom or inkjet world.

Now before the arguments start let me add two caveats. Firstly, I haven’t tested every paper ever made. Far from it. But I do get to see a reasonable cross section of the new papers that appear each year, and I also speak to other photographers and printers and ask them what they’re seeing and what they’re using that’s new and interesting. Since December 2007, I have always returned toIlford Gold Fiber Silk. This is a Baryta based paper with a small amount of OBA’s, as are almost all papers that use Photo Black ink. (Baryta is a clay-like substance long used as a coating in high-end B&W traditional chemical darkroom papers, intended to enhance whiteness without the use of OBAs).

The new Canson IBP is very similar to Ilford’s GFS. I would say that the main thing that differentiates them is that IBP is slightly whiter and has a slightly more "present" micro-stipple than does GFS, making it look even closer to a traditional photo-chemical printing paper from the B&W world. Don’t misunderstand. This is a smooth surface paper, and when looked at obliquely one can’t see any "surface". But, when there is ink on it, especially blacks and dark tones, there is what looks like a micro-stipple – exactly what we used to see in Baryta photochemical papers. Hard to describe, but once you see it you’ll know what I mean.

This is all to the good. There is a brilliance to the paper – depth of saturation, apparent dMax (though this is of course a function of the ink, not the paper) and a "three dimensionality" that can only be appreciated in person. Describing papers is like describing wine. Words simply can’t do it, and in this case there is nothing that can be shown online. One simply has to try a pack for oneself.

My only concern with IBP is that like GFS it scratches easily. After some investigation this appears to me to be a function of its high Baryta content. Since Baryta is a clay-like material used as a coating to enhance brightness it makes sense that an errant finger nail or the sharp edge of another piece of paper can scratch it.

The bottom line onCanson Infinity Baryta Photographiqueis that it is the most appealing paper that I have yet used, and looks like it will become my new standard.Ilford Gold Fiber Silkis a very close second, and I would have no trouble, as I have for the past two years, using it instead. Both define the state of the art in today’s smooth surface photographic inkjet papers though to my eye IBP has a small but noticeable edge.

I would like to thankVistek, Canada’s leading professional photographic dealer, and the Canadian distributor of Canson papers,
for arranging for my test of Canson papers.
All Canson papers including Infinity Baryta Photographique are available to Canadian buyers through Vistek.

This may be the weirdest paper that I’ve ever seen, and I use the word "weird" advisedly. Hahnemuhle sent me a 24" roll for testing as soon as the first shipment arrived in North America. I have been a long time Hahnemuhle paper fan, especiallyPhoto Rag, which I have used as my standard "rag" printing paper for several years. But I now rarely print on matte papers, preferring the wider gamut and greater dMax of papers likeIlford Gold Fiber Silk, my "standard" paper for exhibition quality prints for the past two years.

When I took FB Baryta paper out of its box to load into my Epson 7900 I was surprised at its appearance. It had a very strong magenta cast to it. I immediately assumed that because it was an early production sample that it was defective. I wrote to my contact at Hahnemuhle and explained what I was seeing, and could they please send a new test roll. I included a photograph of the roll, opened up, with other (normal) paper laying close by to show the problem. 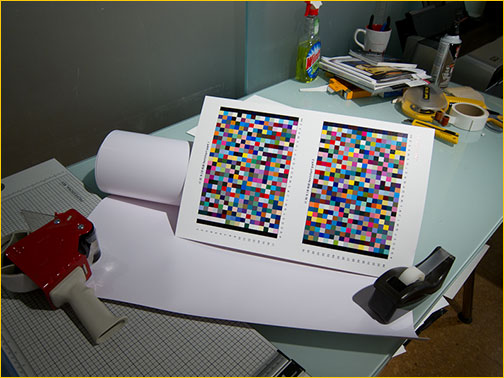 To my surprise I received an email explaining that this was the way that the paper was supposed to be. In a subsequent telephone conversation with one of Hahnemuhle’s technical experts it was explained to me that the reason for the apparent base paper colour was the high levels of OBAs in the paper, and that apparently "Europeans like this look". It was further explained that once profiled the magenta cast would "profile out" and that the advantage of the paper’s brighter whites would be apparent.

With all due respect to the folks at Hahnemuhle, I don’t believe a word of it. I can’t say that I know how "all" European photographers like their papers, but I’d be very surprised if many like this look for its own sake. And while it’s true that when profiled the image area will not show the magenta cast, it will show through in very white areas of an image, and also in the border areas.

Sorry Hahnemuhle. I stopped my testing at this point because I regard Baryta FB to be so far from what I regard as an acceptable paper that it wasn’t worth my time to test it further.

To my mind this is a highly misguided paper and likely to be of little interest to most printers. But, maybe your taste in papers is similar to what Hahnemuhle perceives as a "European taste", so my suggestion is that you purchase a small package and try this paper out for yourself. It might just be toyourtaste.