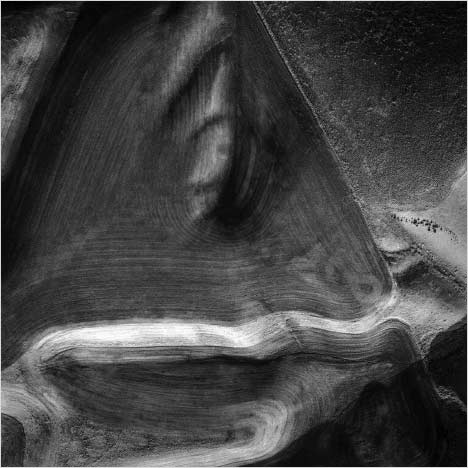 Photographing aerially can be a wonderful experience and not difficult or prohibitively expensive. The resulting pictures from your shoot will blow you away, if you do them right. Got someplace you’ve been photographing for years? Ever wonder what it would look like when photographed from above? Read on.

In this article I will discuss photographing the landscape by making aerial photographs. Then I’ll give a little background into my methodology and aesthetic  when flying over something at about 100 mph.

I began photographing in the southeastern corner of Washington, in an area called The Palouse, in the mid nineties. By the late nineties, I’d been a few times and was still shooting on the ground in 8  x10. I got it in my head that I wanted to try to shoot from a plane so I went to the small airport in Pullman, Washington and met a man who ran an air charter company. He agreed to take me up and told me that he had a plane with a 5 inch metal plate in the back floor that could be unscrewed so as to point the camera straight down.

I had a Hasselblad Superwide with me and I remember buying extra film as I didn’t know how much I would use.  The pilot had removed the back seat of the Cessna for me so that when we got set and took off I was lying on my stomach looking straight down through the 4 inch hole. As there were about 6 inches of plane between the inside and the outside of the hole I quickly found I could either look through the hole or shove the camera down through the hole to take a picture, but not both at the same time. That flight lasted one hour and I shot 16 rolls of 120 mm film. 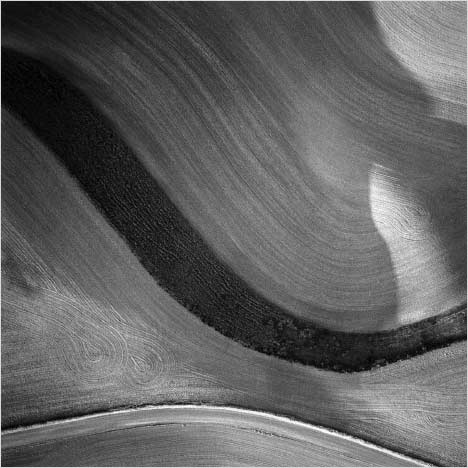 Now I photograph from the unused seat, next to the pilot. Photographing aerially is quite easy to do logistically. Go to an airport, find the private aviation area, ask if there is anyone that can take you up for an hour or so, and make sure you are flying in a high-wing plane like a Cessna 172 or 182. Helicopters are great but far more expensive. Cessnas are good as they are light, maneuverable, slow, ubiquitous and have a window with hinges on the top so that air pressure will hold the window open once you’re in the air. You can’t get good photographs shooting through the glass. The Cessnas have a diagonal support strut for the wing right in front of you and I am surprisingly adept at getting this in my pictures, even though I know it’s there. Try to avoid the strut. I usually am charged about $250 for an hour’s flight. Of course there are many levels of photographing from the air. If you begin to get serious about aerials a gyro stabilizer is next up the chain in the pursuit of higher quality (the primary company that makes these is in Connecticut: Kenyon Labs). These are expensive and heavy but increase the ratio of successful pictures to failures considerably. I regard a shutter speed of 1/1000 of a second as a minimum and am always trying to get more depth of field (DOF). You’d think DOF wouldn’t be so important but if you photograph at an oblique angle with a long lens like I do you need DOF. I used a Nikon D3x for a few years and am now using the Nikon D800E. The primary lens I use is the f2.8 70-200mm VR Nikon.

Although the Cessna is a tight place to work, it is possible, particularly if it is not too cold and you are flying through calm air. I find mornings are better for a variety of reasons including less turbulence and an increasing amount of light is good as opposed to late when light is failing.  I have made flights in the late afternoon and was forced into too high an ISO and too low a shutter speed for the imagery to be useful.

When up against not enough light I have found it preferable to raise the ISO rather than lower the shutter speed. Not sharp is not sharp and pretty well the worst.

It is a good idea to wear an intercom so you can speak with the pilot when you fly so you can tell him/her where you want to go and when you want to go around something again. Pilots have to worry about other planes, mountains, restricted airspaces, wind shear and minimum altitudes. For what I want and tend to shoot, I find 800 to 1300 feet above my subject is about right. Too high and I am zooming in all the way so quality drops and too low everything moves by too fast. 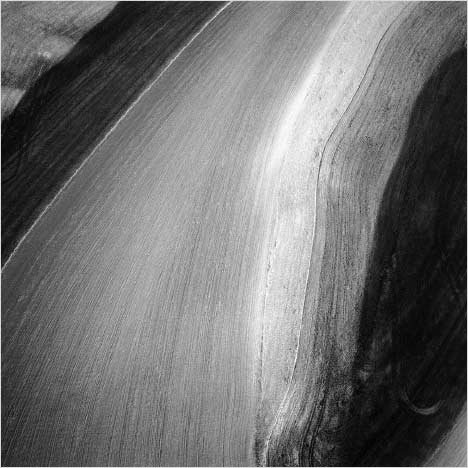 So far I have aerially photographed extensively in the Palouse area of Washington, about and around Moab, Utah and all the islands of Massachusetts on an extended project.

One of my larger projects is shooting for two years of the Imperial Sand Dunes in Southern California not far from Yuma, AZ.

Okay so we’ve dealt with the logistics. What about what to shoot? This is harder, of course. I think the first time up I just wanted to see what things looked like photographed from the air. Here are some examples from that first shoot:

Most aerial photographers are flying on a mission. They have a client, or are making survey pictures, or real estate pictures and so on. I am not. I just go up to make art, pure and simple. If it looks good, I shoot it. Sometimes I’ll ask the pilot to circle around something. This can be for other reasons that just another pass. Very often something with back light is best. The subject picks up in tonality, the blacks go deeper, the colors are more saturated, etc. I also have been using overcast days with some success. Be careful that the clouds aren’t too low, meaning the ceiling should be 2000 feet or higher.

I prefer to let the subject be more abstract in the aerial work I do. I don’t need to reference the photographs with buildings or highways.

So, I encourage you to give it a try. For the first time up I wouldn’t worry about the stabilizer, just keep your shutter speed at about 1/1600 to 1/2000.

A little background. Since I am new to Luminous Landscape I thought it might be helpful to share a brief bio with the readers. I retired from teaching photography at the university level in 2012. I taught photography for 40 years. Since then I have traveled frequently to make pictures. Until about 2000 I was a 8 x 10 inch black and white photographer making analog prints. Gradually, over the past fifteen years, I started working in color, started scanning my negatives, made inkjet prints, began shooting digitally and gave up the darkroom.  Now all my work uses digital capture and I print my own imagery for exhibition and/or acquisition.

Much of my work is on my site, including several aerial projects. I also write a blog, on the same site.

I will be showing two series that contain aerial work this spring in the Boston area. One, at the Danforth Museum in Framingham, MA will be on “Wheat” and runs from April 6-May 13 and the other, at the gallery that represents my work, Panopticon Gallery in Boston. That show opens April 3 and runs through May 13  and is of the islands of Massachusetts. There  also is a new book coming out this spring called “Above” which is aerials of Martha’s Vineyard.

See all articles by Neal Rantoul

Neal Rantoul is a career artist and educator. Recently retired from 30 years as head of the Photo Program at Northeastern University in Boston he is devoting his efforts full time to making new pictures and bringing earlier work to a national and international audience. With over 50 one-person exhibitions over the length of his career, Rantoul has just finished two new shows that were in April 2013. One was at the Danforth Museum in Framingham, MA that opened in early April and another at the gallery that represents his work, Panopticon Gallery in Boston, that opened April 6. These two exhibitions emphasized more current work. The Danforth show was of “Wheat” and the Panopticon exhibition featured new aerial photographs of the islands off the coast of Massachusetts.

Interview with the CEO of Hasselblad – Perry Oosting

An Exclusive Interview With Hasselblad's CEO Unlike many camera companies Hasselblad is named after its founder, who was Victor Hasselblad.  The name Hasselblad is iconic