Before getting to the substance of this letter, some perspective on how this came about is in order.

Many of our readers are probably familiar with DxO Labs, and more specifically, with their DxO Mark sitewww.dxomark.com.

DxO is specifically interested in measuring data about cameras and lenses at the RAW level.  The DxO Mark site is the premier site to find this kind of photographic information.

I have always been interested in data mining, and given the vast amount of data that DxO has measured, I was wondering if there might be interesting results that can be derived from analyzing already existing data in new ways.

During a meeting with some DxO top executives at Photokina last September, the topic came up and it became evident that there are indeed a number of interesting and largely unknown facts that can be derived from the data. Their top marketing and engineering executives have been kind enough to share some of this information with us.  This is the origin of this open letter.

Note that we expect to continue this relationship with DxO and periodically provide our readers with interesting information derived from their data.

Before proceeding with the letter, it is important that the readers understand a couple of simple definitions:  F stop and T stop.

Most of us are very familiar with the F stop numbers on lenses.  As a reminder, the F stop number is the focal length of the lens, divided by the diameter of the aperture that lets the light into the lens.

While the F stop is closely related to the amount of light that a lens delivers at the film or sensor plane, different lenses deliver different amounts of light at this planeeven if the F stop is the same.  Why?  Because every element inside a lens absorbs and reflects a certain amount of light, so there is some light loss as light rays travel through the entire lens. As you can immediately imagine, very complicated lenses with lots of elements are likely to have higher light losses than simple lenses, and lenses with excellent coatings are likely to loose less light than lenses with inferior or no coatings.

The issue is serious enough, that the movie industry adapted a different standard many years ago.  If one measured the perfect exposure with a lightmeter, and selected the proper F stop, when using a complicated movie zoom lens one was likely to underexpose the sequence because of light losses in the lens.

Therefore, the movie industry started using T (for Transmission) stop numbers rather than F stop numbers for lenses.  The T stop is the F stop corrected for light losses produced by a lens.  In other words, it truly represents the amount of light hitting the film or sensor plane, and setting the correct T stop for a light measurement delivers the correct exposure. Also, different lenses set to the same T stop deliver exactly the same amount of light at the film or sensor plane.

You can think of the T stop as follows:

Imagine a perfect lens of the same focal length as your real lens: It has no light loss. Then, reduce the diameter of the input pupil to match perfectly the light intensity behind the real lens after the light goes through it.  Calculating the ratio of the focal length to this modified input pupil diameter gives you the T stop.

You will understand why I wanted to make sure these definitions are understood as you read the data in the next section.

As mentioned above, DxO labs kindly supplied all the data presented in the figures below, and it is based on data previously measured and published in the DxO Mark site.

The following graph shows the light lossAT THE SENSORfor a number of different Canon cameras using an F 1.2 lens. 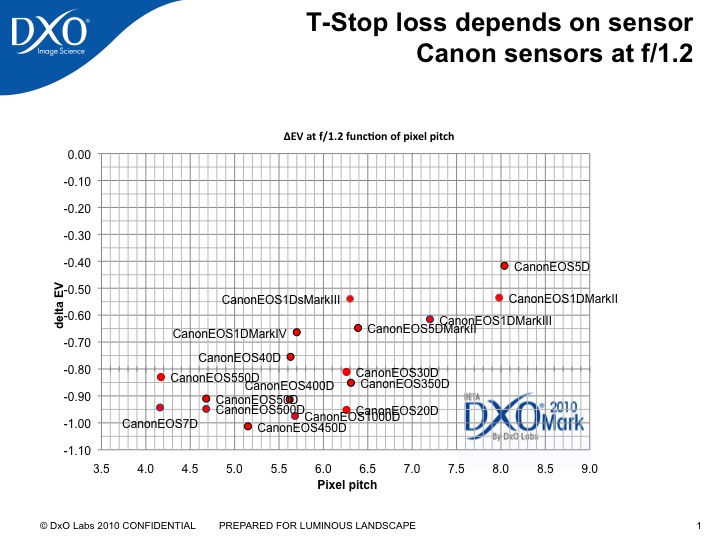 The vertical scale is in EV numbers, 1EV represents   a difference of  1 T stop.  Notice how there is a very substantial loss of lightAT THE SENSOR.

When you look at the structure of CMOS sensors, each pixel as basically a tube with the sensing element at the bottom.  If a light ray that is not parallel to the tube hits the photo site, chances are the light ray will not get to the bottom of the tube and will not hit the sensing element. Therefore, the light coming from that light ray will be lost. It appears from this graph that when using large aperture lenses on Canon cameras, there is a substantial amount of light loss at the sensor due to this effect. In other words, the “marginal” light rays coming in at a large angle from near the edges of the large aperture are completely lost.

By the way, this type of light loss is the main reason that modern lenses designed for digital photography place great emphasis on the direction of light rays behind the lens.  It is also an important reason why Medium Format backs (often used with camera movements such as  tilt, rise/fall and shift) and the Leica M9 (with lenses that produce mostly oblique light rays) use CCD sensors with a very different structure, rather than CMOS sensors.

The next graph for Nikon and Canon sensors at F/1.4 shows how the T stop loss clearly depends on the specific sensor. 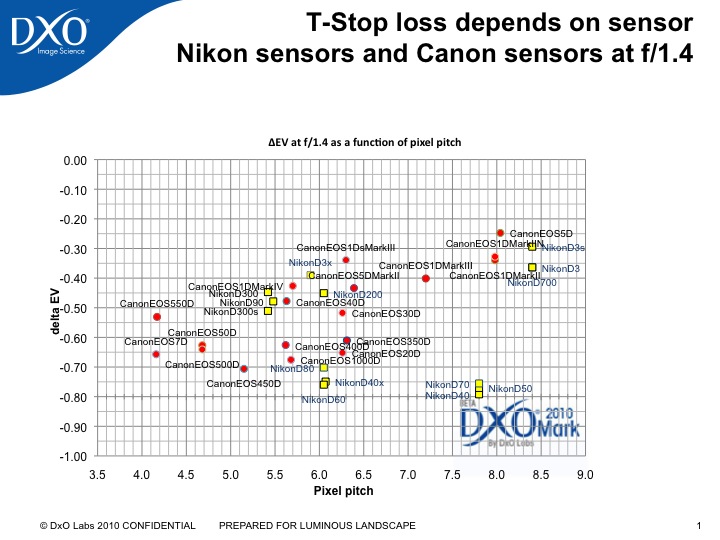 So the next question is:  If the light loss is so significant, how come we do not have great numbers of photographers complaining about severe underexposure at large apertures?

The answer may lie in the next graph: 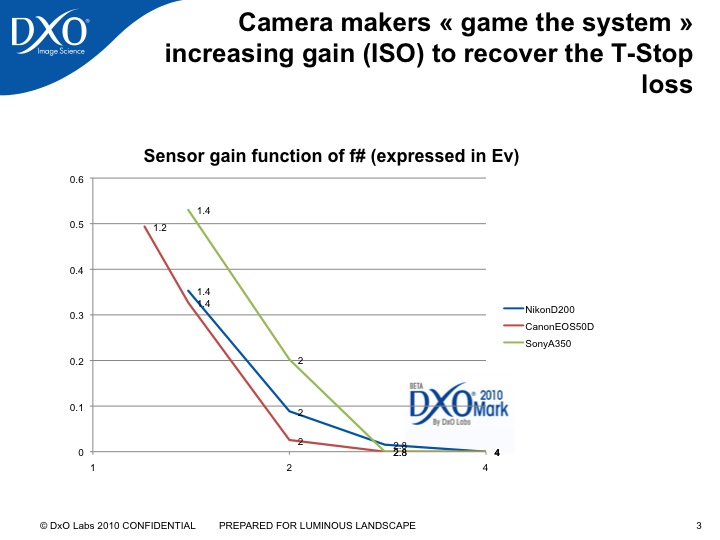 This graph clearly shows that camera manufacturers “game the system” byincreasing the ISOwithout the photographer’s knowledge.

Personally, I think this brings up several issues.

1.  When I select a specific ISO, I have a reason to do so.  I find it unacceptable for the camera to change it without my knowledge.

2.  If the camera is automatically going to increase the ISO due to a significant light loss at the sensor, does it make sense to buy bigger, heavier and much more expensive large aperture lenses?

One might be better off purchasing smaller aperture lenses and increasing the ISO.  Since these lenses have much less light loss at the sensor, one may well end up with virtually indistinguishable results. In fact, is not even clear that large aperture lenses will deliver a shallower depth of field as intended. The DxO measurements to date prove that the marginal light rays just don’t hit the sensor. The point regarding depth of field is that these rays are also responsible for a larger blur spot when out of focus. If they are lost, they not only don’t contribute to the light intensity at the sensor, but they also don’t blur the out of focus planes as much as you would expect at wide apertures.

DxO is currently performing thorough focus measurements to support this argument. We will keep you updated as soon as the data becomes available.

Bottom line: Due to the complexity of design and manufacture (let alone the high cost and weight) of large aperture lenses, one may actually end up with better results at virtually the same ISO and depth of field using lenses with more modest maximum apertures.

3.  While increasing the ISO without the photographer’s knowledge is a pretty neat engineering trick, there is the issue of full and accurate disclosure to customers.

In view of the above, we would greatly appreciate comments from the camera manufacturers, particularly the major companies such as Nikon, Canon, Sony, Leica, Panasonic, Pentax, etc.

Please give us your feedback so we can share it with our readers.

I would also like to report that DxO Mark has launched a new release of their sitewww.dxomark.comfor 2011, which includes a new look and more comprehensive test data than before.

The latest data for light loss at the center of the sensor, when using large apertures can be found at the following link: