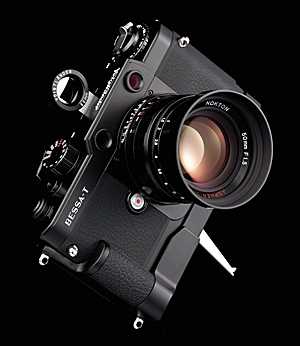 Announced in the Spring of 2001, and just becoming available in some markets several months later, theBessa-Tis the third rangefinder camera fromVoigtlnder. Voigtlnder is a venerable but reborn brand name, being used now byCosina, heretofore a Japanese custom OEM manufacturer.Voigtlnder was one of the popular European brands from the pre-WW2 era, though the 1950’s.

Over a couple of years prior to the introduction of the Bessa-T, Cosina have made available two other rangefinder cameras as well as a wide selection of Leica-compatible screw-mount lenses.Please see my articleRangefinder Renaissancefor a bit more on this fascinating camera line and for links to other sources of relevant information.

Since I already own aLeica M6, I bought the Bessa, and specifically the Bessa-T, almost exclusively for a use with the12mm Voigtlnder f/5.6 Heliarultrawide angle lens. I also bought it as an emergency backup for the M6. Unlike the other two Bessa models the T takes Leica M mount lenses, making it suitable for this purpose. 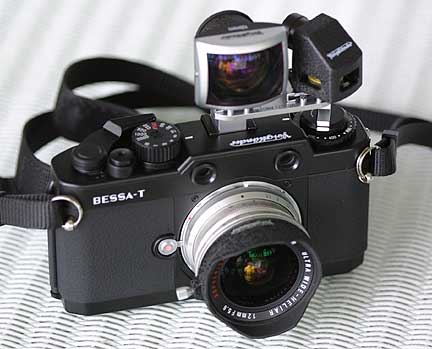 The T because it serves two purposes for me. It’s the body on which I keep my Voigtlnder12mm f/5.6 HeliarUltrawide lens,andit serves as an emergency backup body for my M6 Leica. If I had purchased the Bessa-R it would have served equally well for the 12mm but I would not have been able to mount my M series Leica lenses on in it a pinch. TheHexar RFwas a thought, but at twice the price; more than I wanted to pay for an occasional use camera.

The Bessa-T is about as basic a camera as one could want. It does have a TTL meter though with exposure displayed on three LEDs (2 reds for under and over exposure with a green one in the middle) located on the back cover. This works very well as they are in your field of view when your eye is at a viewfinder on the accessory shoe, and also convenient to see when holding the camera in front of you.

Shutter speeds run from B to 1/2000th second. The film speed setting dial is around the rewind crank. The accessory shoe is not hot, but there is a PC connector for flash at 1/125 sec. The wind level works in a single stroke or several short strokes. The shutter mechanism is metal. The shutter release button is threaded for a cable release.

The shutter release sound is a moderate metallic thunk, not thesnickthat ones used to with a Leica or the whisper of some high-end point and shoots.

This is not your fathers Oldsmobile, nor is it an M series Leica. Don’t get me wrong. The Bessa-T is quite a decent little camera. Quality of materials is adequate and construction appears competent. Pretty much what you’d expect for about USD $360. (I recommendRobert White, a reputable UK mail-order dealer. That’s where where I bought mine.) In fact, comparing theTto anRthat I examined at a dealer, I’d say that theThas slightly higher quality of materials and construction. Just understand that this isn’t a camera that you’re going to sit and fondle on a cold winter’s night because of its precision. Just a nice little picture taking machine.

Incidentally, comments about Voigtlnder camera build quality should not be taken to apply to their lenses. The Voigtlnder lens’ standard of materials and assembly is exemplary, though at the price don’t expect Leica quality.

Sometimes it’s the little things that endear one to a tool such as a camera. On theTthere are two things that stand out. One is the progressive nature of the shutter release, with the first part of the travel turning on the meter. Unlike the M6, you’re unlikely to accidentally trip the shutter when all you want to do is take a meter reading.

The second is the intelligent design of the meter system. Touch the shutter button and it stays on for 12 seconds. When the shutter is unwound the meter will not turn on, avoiding depleting the battery if the button is pressed accidentally in a camera bag. What stands out though is that the meter stays on for a few secondsafteryou’ve taken a shot but before you’ve wound on to the next frame. This allows you to confirm your meter reading. Intelligently designed.

The Bessa-T is an oddball. If you own Voigtlnder screw mount lenses you’ll likely prefer the Bessa-R because you won’t need to buy screw-to-thread adaptors for each lens. If you have a super wide lens like the Voigtlnder 12mm or 15mm you’ll likely prefer the Bessa-L because it’s less expensive, due to not having a rangefinder or viewfinder, both of which are redundant with these lenses. If you just want a less expensive backup for your M6 Leica then the Hexar RF probably makes more sense.

So who should buy a Bessa-T? Other than me, I’m not really sure. But if you do decide to get one I’d be curious to hear why you chose it.

The only other on-line review of the Bessa-T that I’m aware of is found atCameraquest.

Several of the articles listed below were written for different print and web based publications over a period of a few years.  They have been

Workshop Submission Confirmation Thank you for submitting your Registration Page for theBosque del Apache / White SandsWorkshop. You will receive confirmation and further details via