Success‚ In a Flash

Most photographers understand the benefits of using fill flash under harsh lighting conditions. Most modern cameras using either built-in flash heads or custom designed external units are capable of doing daylight balanced fill-flash.  These are are very convenient, simple to use, and can provide a high percentage of successful images. 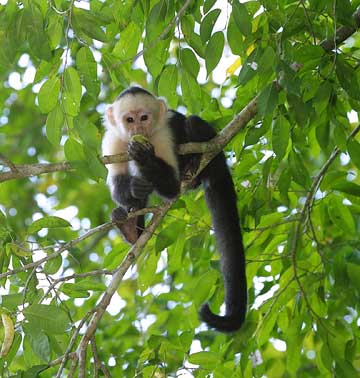 For many forms of wildlife, and in particular birds, fill-flash is frequently needed but difficult to accomplish. Such photography is typically done with long lenses‚ usually between 300mm and 600mm in focal length. Even the larger external flash units run out of steam beyond about 50 ft (15 meters) because their light is being dispersed over too broad an area.

This has lead to the recent development of several different devices whose purpose is to concentrate the light output of a flash head so that it has a greater reach. My research turned up what I regard as the best of these,Walt Anderson’s Better Beameravailable fromArt Morris’ Birds as Artweb site. Art is one of the world’s preeminent bird photographers. 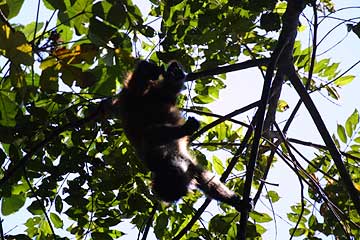 This frame shows the nature of the problem. Neither film nor imaging chip can handle the exposure range. If you manually open up by a couple of stops you’ll properly expose the monkey, but will burn out the sky. Fill-flash solves the problem.

Beam Me Up Scotty

Ona tripto photograph birds and other tropical wildlife at an eco-lodge in southwesternCosta Ricain February, 2001 I used this device for the first time with excellent results. You’ll find numerous other photographsthereand on linked pages that used theBetter Beamer. 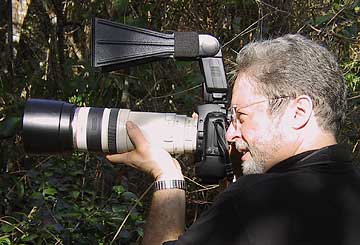 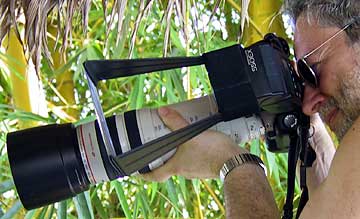 Part of the reason for the success of this device is that it’s a no-brainer to carry along. Unlike competing models, it folds completely flat and weighs almost nothing. At less than $40 it also is inexpensive enough to experiment with freely.

The two photographs above show theBetter Beamerbeing used together with aCanon EOS D30,100~400mm f/5.6Llens and550EXflash. The diagram below illustrates the three components‚ the fresnel lens, side supports and Velcro attachment band. 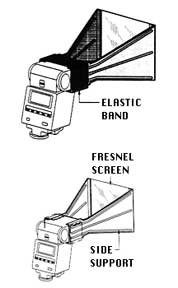 It’s claimed that the device can effectively add 2 stops worth of "reach". I haven’t measured it but I did find the flash to be effective in E-TTL daylight fill-flash mode out to at least 100 feet. 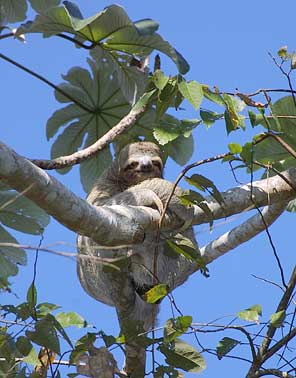 One of the challenges of shooting in the jungle is the huge contrast range. ThisTwo-Toed Slothat the top of a very tall tree presents a classic problem. Expose for sunlight areas and the shadows will go murky. Expose for the shadows and the highlights will burn out. The use of fill flash, as seen here, opens up the shadows without the appearance that flash was used.

I found that a -1.5 stop ratio between the flash and the camera’s basic exposure provided enough fill to lighten shadows but without a fill-flash "look". Also, when shooting upward into bright skies I often adjusted the camera’s meter to -1 stop as well, to prevent burn-out. 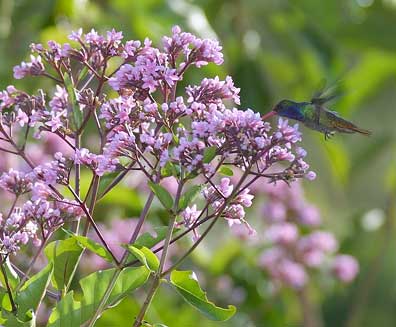 This photograph illustrates how inconspicuous yet effective extended fill flash can be. One hardly notices that it’s there, with the exception that the hummingbird’s wings have been slightly frozen, and the iridescence of its body is nicely illuminated.

In both this frame and the one above of theWhite Faced Monkeyyou’ll notice in the enlarged views that a catch light is just visible in the hummingbird’s and monkey’s eyes. This is vitally important to adding life a large print. Many photographers fake it in Photoshop, but as with all such effects it’s better if you can get the real thing.