I believe that this is a critical accessory for anyD30owner. Here’s why.

High-endCanoncameras (EOS-1V and EOS3) have available accessory motor drives. These add two primary capabilities‚ higher speed film advance and a vertical grip. (The EOS-1V can fire up to 10 frames per second‚ roaring through a 36 exposure roll of film in under 4 seconds). TheBG-ED3grip for the D30 does not add any faster advance, but it does add a vertical grip as well as the ability to hold a second battery.

Many purchasers of theD30will be experiencedCanon EOSsystem users and will be totally familiar with the "feel" of the grip, and will immediately understand why it’s virtually a necessity. But theD30is going to appeal to a lot of newcomers to SLR use and that’s why I’m stressing this point.

TheD30, like most smallish SLRs, feels very comfortable in ones hands, particularly with small lenses. But, like all serious SLRs, once one puts on a largish zoom the lens ends up overwhelming the camera body. Also, when one turns the camera to the vertical orientation the various controls, including the shutter release, become awkward to use. Furthermore the grip gives the camera a much-needed heft that makes it feel more like the substantial instrument that it is.

With theBG-ED3the exposure lock and focus point selection buttons are duplicated in the vertical orientation, as is a second shutter release. The grip also houses a second battery and automatically switches to the second battery when the first one is depleted. With 2 batteries theD30should be good for at least 1,000 frames under most situations. More than enough for most people on most days. (That’s one exposure every 30 seconds for 8 hours!) 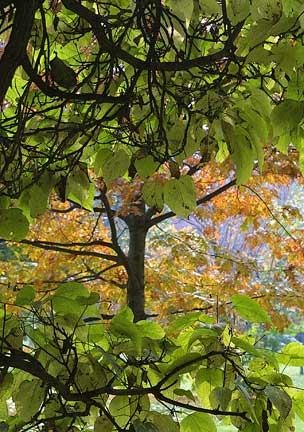 This photograph is included here because it’s one of the first taken with the BG-ED3 installed; three days after I first picked up the camera. Secondly, it’s the first shot that I’ve done with the D30 that I feel is a "keeper", rather than just a "test" image.

If you click on it you’ll see a quite large version; about 8.5 X 13". It may take a while to load but you’ll probably find it worthwhile. It shows what an ISO 400 image taken in the "real world" can look like.