In early January, 2001 my wife and I went to a retreat in theBlue MountainsofJamaicafor a break from the harsh Northeast winter. I had plans to do some landscape work while there but upon arrival I came down with the flu and spent most of the week housebound in our cottage. (If you have to get the flu, Jamaica ain’t a bad place to have it). On top of it all, locals said that during the week we were there the weather was the cloudiest that they had seen in years.

If that was all there was to the story this section wouldn’t exist. But, on our last evening there I was feeling well enough to take a walk and just before sunset my wife and I headed out to stretch our legs. I took along theXPan,30mmand a table-top tripod.

As we walked the heavy clouds that had hung over the mountains almost all week started to clear and a lovely sunset developed. Just moments before the sun dipped below the horizon I found a location to set my small tripod on and an arbor to use as a frame. The ocean is about 3,000 feet below where we were standing.

Though I was restricted to our cottage for much of the time, it had a large deck that overlooked this lovely valley. I spent much of the week there, reading and sleeping, but being an inveterate photographer I took quite a few frames as well. This vertical panoramic shows something of the possibilities that were available. 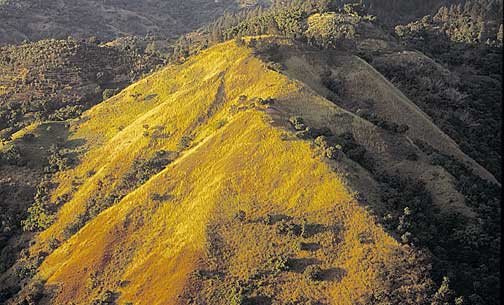 Though the week was mainly overcast there were occasional shafts of sunlight on the valley. This frame shows one which lasted for mere seconds before the sun slide behind the cloud cover once more. Compare the angle of view with the frame above it.

While looking out over this valley I also started playing with doing stacked vertical frames for digital stitching.My articleon this might prove interesting if you have aHasselblad XPan.