The highest point in the state ofGeorgiaisBrasstown Bald, located about 45 minutes from the town ofHelen. This photograph was taken from the parking lot looking westward, about a half hour before sunset.

There is a fantastic observation platform at the very top of the mountain providing 360 degree panoramic views. Unfortunately the mini-bus that takes you from the parking area to the summit does not run either early in the morning or after 5:30pm. To shoot sunrise or sunset therefore means a very strenuous 20 minute hike up a steep trail. Well worth it though as seen below from when I revisited a couple of weeks later.

Two weeks after the first sunset shot from Brasstown Bald, shown at the top of this section, I returned for a sunrise. I didn’t relish the very strenuous 20 minute hike in the dark, but when I awoke in aHaiwasseemotel at 5:30am and saw that it was quite foggy, I knew that the chances for a mountainscape with fog-filled valleys was very strong.

I was rewarded by one of the most spiritually and photographically moving mornings that I’ve had in months. The image above was shot about 25 minutes before sunrise. I was glad I’d decided to work with theHasselblad XPanbecause the panoramic format perfectly suited the wondrous scene laid out before me. (It also was the lightest system available for the hike. I simply wasn’t up to such a difficult hike carrying a 35lb pack containing myRollei6X6 system at that time of the morning.)

This frame is odd-man in the middle. It displays the fog-shrouded valleys best but lacks the drama of the one above or the gentleness of the frame below. As with three children, it’s hard to choose a favourite.

My last frame of the morning was taken about 45 minutes after sunrise. The sun was temporarily behind a cloudbank but suffused the fog in the valleys with a warm pink glow. I particularly like this image because unlike the previous two it provides a feeling of scale due to the foreground vegetation. 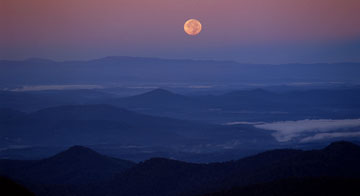 A couple of weeks after the previous photographs were taken I return toBrasstown Baldfor the third and last time. I judged this location to be both the most convenient and potentially rewarding for a shot of the full moon setting over the Georgia mountains at sunrise. And, since it was mid-week, it was just a quick overnight from my temporary apartment in Atlanta.

While most people realize that there is a full moon once a month, what it seems only photographers pay much attention to is that on that one day a month the moon rises and setsexactlyat the same time is the sun does, but 180 degrees apart.

This frame was taken within minutes of the one above. A large print shows remarkable detail in the moon, even though it’s small in the frame.

It is instructive to compare the perspective given to the scene by such different format cameras and focal lengths. (The 90mm on the XPan is like a 50mm in 35mm terms while the 300mm on the Rollei has the same magnification as a 180mm). 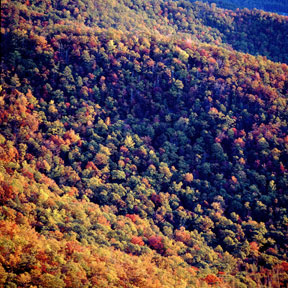 Brasstown Baldisn’t just about distant vistas and panoramas. In mid-October the foliage was in the midst of its Fall changes and searching for detail like this with a long lens was an easy way to burn through several rolls of film. The warm directional rays of dawn help as well.