This report was first written in mid-June, 2001. The product is clearly evolving quickly and as new versions become available I will be updating this review.

Chris has just updated BreezeBrowser to V1.0. My initial impression is that all of the minor issues from previous versions have now been resolved, particularly the directory management problem. Highly recommended!

Chris Breeze continues to upgrade his excellent program. Now on Version 2.0 the program has addressed almost every concern that one could have‚ and then some. In addition to supporting the D30 it now supports the D60 and the 1D.

In a word, if you are a Canon digital SLR owner this istheprogram for viewing and converting your files.

Since the introduction of theCanon EOS D30there has been much frustration with that camera’s providedZoombrowsersoftware. It’s an amateur’s package supporting a semi-pro camera. The biggest issue has been the viewing and post processing of RAW files. Canon’s provided TWAIN software’s thumbnails are much too small for any sort of useful review. There have been a number of alternative approaches taken to solve this problem, some of them enumerated on this site. But the best so far (June, 2001) isBreezeBrowser.  This is a freeware product that is fully functional as a free download but limited in this form to reviewing 20 images. To unlock the software and allow an unlimited number of images to be viewed, as well as to receivefree updates to all future versions, costs USD $35. This is quite a reasonable price for what the product provides. After 15 minutes with the freeware version I registered it, and you’ll want to as well.

A Beta ReleaseLet me start by saying that this is a beta release‚ currently in Version 0.4.  It is very much a work in progress at this time. As such it is flawed. But sinceBreeze Systemsis charging for the product at this time they should expect reviewers to critique the program as a shipping product. The good news is that the program appears stable. I experienced no crashes running on a Dell 600Mz Pentium III with 762MB of RAM and Windows 98 SE. The bad news is that the user interface needs some work. Before becoming too critical, let’s see what the program does, and how it does it. 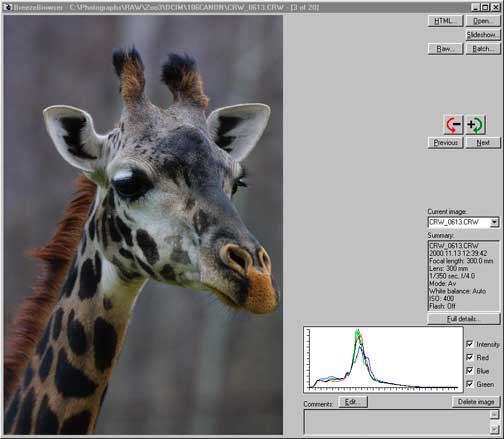 This screen shot shows the main (and only) user screen. A large preview of the frame being looked at is displayed along with a histogram showing all three colour channels as well as the luminance channel. There is aPreviousand aNextbutton for moving through the frames in a particular directory and rotation buttons for turning verticals to the proper orientation. The imbedded camera data is displayed and is also saved with the file when it’s converted. Conversion can also be done in batch mode, converting an entire subdirectory of RAW files at a time. But until the user can select a group of files for conversion this function is less than useful, since RAW conversion is till a slow process‚ about 45 seconds a frame on a moderately fast machine. HTML conversion is a useful feature. This allows you to create a page viewable with a web browser, with a single click. The page contains all of the RAW files from a single directory, though without file names. An improvement on this would be for the user to be able to select which frames were included, and for each thumbnail to (optionally) have its file name underneath. A further refinement that I would to see would be for the shooting data to be able to be included beside each frame as well. While I’m dreaming, printer output as well as HTML would be nice and very handy for archiving and reference. RAW files can be converted to either JPG or TIFF. Exports can also be to either 8 bit or 16 bit formats. Very nice.

Design FlawsThe biggest problem with the program at this time is that the standard Windows directory browser is unavailable. This makes selecting the directory that you want to view a less than convenient.

The simplest solution is to find the directory you want to look at usingWindows Explorerand simply drag it ontoBreezeBrowser. According toChris Breeze, the program’s author, the reason for this is that there is a bug inCanon’s SDK(Software Developers Kit), the tools needed to extract the proprietary RAW file format. It apparently has a conflict with the standardWindowsdirectory browser which causes it to crash. Chris says that the problem has been bumped to Japan and that as soon as it’s resolvedBreezeBrowserwill have proper directory navigation. Examining the files in a particular directory can be done using thePreviousandNextbuttons or by scrolling through a file window. But the program currently lacks a thumbnail browser, making finding particular images a slow process. Chris indicates that a thumbnail browseriscoming on a future release. In the meantime there’s aSlideshowfunction which allows cycling through the files in a given directory. This works well but it requires that its speed setting be reset each time it’s used. The HTML generation routine also provides means for previewing a directory, though in the current version the thumbnails generated aren’t named, and so finding a particular frame is still problematic.

Preliminary RecommendationThough it’s early days (June, 2001), this program looks to have great potential. IfChris Breezecan continue to develop it, refine it and lick some of the basic bugs we’ll all be on our way to having a very fine RAW file utility. Have a look at thefreeware versionand then if you agree with my evaluation pay Chris the $20 for a full version. Even in its current state it’s worth the money, and if Chris gets enough support it’s more than likely that he’ll refine the product into the useful utility that we all want.

With the release of V2.0 this program is nowtheideal tool for viewing and converting Canon digital SLR files.