There are giants in this world. Each discipline and art has them. In photography one of the towering names is Henri Cartier Bresson. This year marks his 95th birthday, and though he’s still very much alive his days are a photographer are over. Cartier Bresson stopped actively doing photography in the early 1970’s and for the past 30 years has devoted himself to his other passions, drawing and painting. In fact, he is quoted as describing photography as “fast drawing“.

Aperture magazine has a feature on Cartier Bresson in its current issue (#171, Summer – 2003) and there is a major retrospective show at theBibliothèque Nationalein Paris, April 29-July 31. (Ahh, to be in Paris this summer.) I haven’t seen the exhibition, but the previously unpublished Cartier Bresson images in Aperture make it worthwhile purchasing, though the included interview is a bit lame. Also, the editors should be ashamed of themselves for insensitively cropping the cover image. The woman at right of frame has her nose cropped off, totally destroying the juxtaposition with the clown’s profile. Inexcusable! 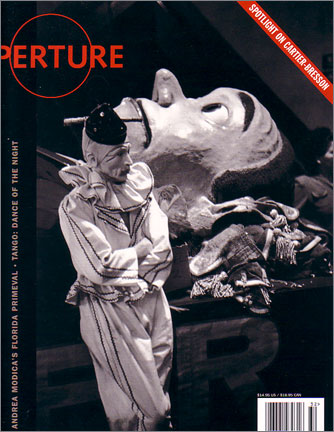 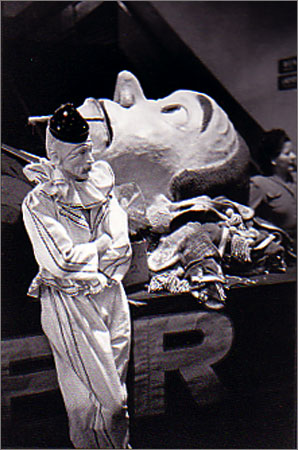 Of greater interest to anyone who admires, or indeed loves this man’s work there is the just published The Man: The Image and The World — A Retrospective, from publisher Thames and Hudson. In a word — Wow!

For anyone that hasn’t tuned in to the world of documentary photography during the 20th century, Cartier Bresson is the one of the art’s leading lights. As a budding photojournalist in the 1960’s (my first career) I remember spending hours, even days studying his photographs. I wanted to understand what it was that made them different — what magic was contained within their four corners that spoke to me so eloquently.

In this new book we finally have the opportunity to explore the entire span of Cartier Bresson’s primary output — a forty year period from the early ’30s to the early ’70s. Most exciting for me is that the book includes a great many previously unpublished images. In addition there are several informative and literate essays in the book (unlike the weak text inAperture) and a unique look at his paintings and drawings.

As a Cartier Bresson admirer, and owner of at least 4 collections of his work, what fascinates me about this retrospective is the large number of images that I had not seen before. Some of his earliest photographs are in this collection, as well as ones from his Magnum days (he was one of the founders of that agency) that have not seen print for more than half a century. Others are seeing print for the very first time. 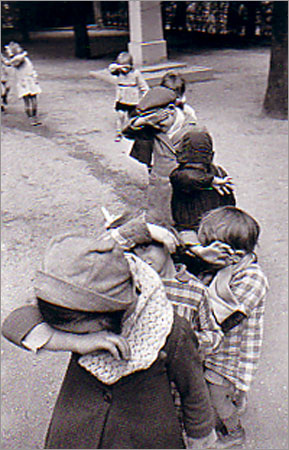 Some, such as the one of above taken in France in 1938, are to my eye at least as penetrating as anything he ever produced. Others are subtle and charming.

In terms of presentation the reproductions are first rate Duotones. Many are framed with a black key-line, while others show the film rebates and even sprocket holes. I find the black framing a bit tedious, but I suppose it was necessary for consistency with the ones that extend into the film stock area. This all makes obvious one of the conceits of Cartier Bresson’s work. He never cropped an image. Every single photograph is a full 35mm frame just as it came from one of his Leicas.

I spent a fascinating few hours with the book looking at hundreds of images, seeing which ones might (to my eye at least) benefit from cropping. Remarkably few, and therein lies part of Cartier Bresson’s genius. Within the confines of the 3:2 aspect ratio of the 35mm frame, and working spontaneously with millisecond timing, Cartier Bresson was able to not onlyseeand capture the decisive moment, but to do so while neither excluding anything vital nor including anything extraneous.

I don’t hold up this disciplined (if not indeed rigid) approach to framing as being virtuous. In fact I avoid it in my own work, believing that each image wants to have its own unique aspect ratio, regardless of what some manufacturer 75 years ago decided should be the relative height and width of the frame.

What makes this retrospective all the more valuable than just it’s comprehensive assemblage of Cartier Bresson’s work is its inclusion of a generous presentation of his drawing and painting, as well as an in-depth look at his efforts in film making. Did you know that he was an assistant to the great French director Jean Renoir, and that in 1969 Cartier Bresson also directed two documentaries for CBS News, one titledImpressions of Californiaand the otherSouthern Exposure? Neither did I.

Of course Cartier Bresson is best known as the coiner of the phrase“the decisive moment“, as well as being the master of its execution. If one is unfamiliar with his work it takes but a few minutes with the book to intuitively understand what this means. It’s as if he was filming the scene with a high speed cine camera, had exquisitely framed the subject and then afterward selected that one frame, that perfect slice of time where all of the elements coalesced, and said, “now!“, and pressed the shutter. Except he did it with a single shot. 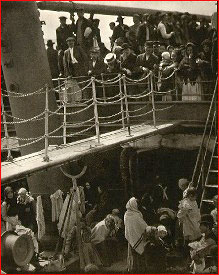 Cartier Bresson was not the first to frame and capture such essential moments in the “modern” idiom. Steiglitz’sThe Steeragefrom 1907 is but one example of an image that captures a moment in time, and does so with a geometry that makes it memorable and timeless, and it pre-dates Cartier Bresson’s earliest work by a quarter century. But Cartier Bresson was it’s master.

For anyone who loves Cartier Bresson’s work; for anyone who admires the finest documentary and street photography; for someone who wants to study the life’s work of one of the 20th Century’s master photographers, The Man: The Image and The World — A Retrospective isn’t an option — it is a must have. If you buy only one photography book this year, this should be the one.

Mirrorless Revolution 2014 – We Said It Back Then

FacebookTweet The Mirrorless Revolution 2014 I recently published an article about the upcoming Mirrorless War. The video and article seem to have gotten a lot

Of beautiful trees and ambitious cameras and lenses. Part 2- where we’re going.

FacebookTweet An ambitious camera or lens is one that allows, in some way, the making of images that could not have been made before, or