Every now and then a product comes along that either redefines a market, or how things are done. Such a product is theCamera Rawplug-in for Photoshop 7 by Adobe. I was fortunate enough to be an early tester forCamera Rawand am pleased to publish here a hands-on review based on several months of use.

Before having a look at whatCamera Rawdoes, let’s see what problem it addresses. 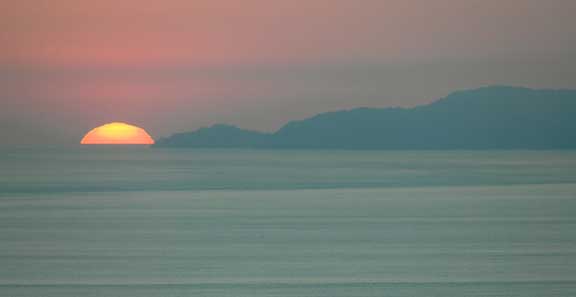 Digital cameras typically produce one of two types of files‚ JPGs or so-called RAW files. Most amateurs work with JPGs and professionals frequently work with RAW files. Here’s why.

The advantage of JPG files is that they are small and can be read by just about any program. The reason that they are small is because they are created by what is called "lossy" compression. That is, some data is lost when the file is created. Not a huge amount, but if the compression is set too high it can be noticeable. The reason that just about any program can read and load them is that JPG is an industry standard format. (JPG is also the standard file format of the Web). JPG files are therefore convenient, which is why they have appeal to amateurs.

But having your digital camera save in JPG format means that all of the in-camera settings for colour balance, colour temperature, sharpening and so forth are processed by the camera and imbedded in the file. Changing these somewhat after the fact in Photoshop is possible, but the image will deteriorate in quality.

RAW files are in a proprietary format that is unique to each manufacturer, and often unique to each specific camera model. These files are compressed "losslessly". That is, they are smaller than when expanded to a standard TIFF file in Photoshop (usually by a factor of 3:1), but no information is lost in this compression. The real advantage of using a RAW format file is that it has received almost no processing by the camera. No sharpening or White Balance will have been applied. What you have with a RAW file is essentially a digital camera’s "negative" or original. You also can work with the file in 16 bit mode, whereas JPG files are always 8 bit. All of this means that when you work on the file in Photoshop you are starting with a much higher quality original than with a JPG file and also have much greater flex ability in applying corrections and adjustments without significantly degrading the final image quality.

But because these RAW file formats are unique one needs to use a special program to "decode" them. Camera manufacturers provide special software for decoding their RAW files, sometimes free with the camera and sometimes as an extra cost option. Frankly, in the case of Canon’s RAW processing software the user interface isn’t very good. I have no experience with Nikon’s NEF decoders, but there exist good and inexpensive third party alternatives for both Canon and Nikon, and in my experience these are invariably superior to what the camera makers provided. The two most popular RAW decoder programs till now for Canon areBreezeBrowser and YarcPlus, and for Nikon there’sBibble.

Camera Rawworks as a plug-in for Photoshop. To activate it one simply uses Photoshop’sFile Browserto look through a directory of RAW files on disk and then double click on the thumbnail desired. 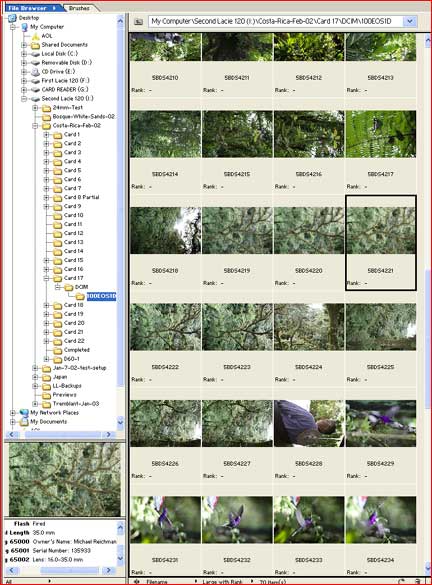 Select the RAW file that you would work on and double click it. This is the screen that appears, and is the screen upon which all ofCamera Raw‘s magic is performed. 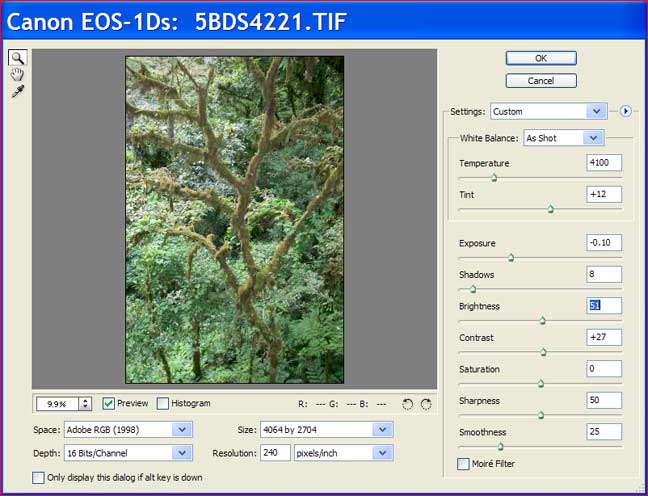 A preview of the file is displayed at the center left of the window. This is a moderately large and high quality preview. The suggested workflow is to work your way down the list of sliders on the right, and so that’s the way in which I’ll explain them.

This is the colour temperature of the White Balance setting. The value initially displayed is that set by the camera (usually "Auto" if one knows thatCamera Rawis going to be used). You can now set the desired White Balance in one of four ways;

‚ by setting the numeric value to a specific value

This is the "second axis" used in setting colour balance and allows you to fine tune it. If you’ve used theone clickmethod with the eye dropper this typically needn’t be used.

This sets the "White Point", and for the first time in any program that I’ve ever seen allows you do so with a visual hint. You can hold down theOptionkey while moving the slider and the screen will show the exact point at which areas in the image begin to burn out.

This performs the same function but for the "Black Point". It can either be set by eye or with the aid of the visual clue produced when theOptionkey is depressed.

This control adjusts the "Gamma" or center point of the brightness range.

What is says‚ adjustments the dynamic range of the image.

Again, what it says, from mono to blow your mind Velvia+

I suppose that this was added for those people that want the output ofCamera Rawto produce essentially a final image. I don’t use it, preferring to sharpen my files just before printing.

Arrayed along the bottom of the window are a number of fairly self explanatory controls.Spaceallows you to set the colour space that the image will be converted to when brought into the main Photoshop program;Sizepermits you to change the size of the file;Moiré Filterremoves moiré patterns that might exists in your file;Depthlets you set whether this file will be brought into Photoshop in 8 bit or 16 bit mode, and finallyResolutionlets you set the default resolution which the file will adopt once in Photoshop.

There is also a histogram that can be overlayed on the image, and it is dynamically updated as you make alterations.

In addition to what you can see, there is what you can’t see.Camera Rawfeatures an always-on hot pixel removal capability that comes into play on long exposure images. Normally it has no effect but can make quite a difference on nighttime exposures.

Adobe has stated that Camera RAW is a temporary solution. It allows those of us with Photoshop 7 to utlize its capabilities. But, they have also stated that these capabilities will be included in the next version of Photoshop. I have no firm information on when this is to become available, but I expect that it will be some time before the end of 2003.

I mention this for two reasons. The first is that while the list above shows the cameras that are supported in February 2003 at launch, there is no information on whether or not new cameras introduced in the months ahead will be supported as well, and if so, how. The second reason is that if you intend on purchasing the upgrade to the next version of Photoshop (and who doesn’t?) then this $99 investment is a temporary one.

Very little, actually. This program was clearly a labour of love for its primary authorThomas Knoll, the original author of Photoshop. Thomas is an enthusiastic photographer and like many digital camera owners he shared our frustration with the poorly written RAW conversion software that the major manufactures typically provide. WithCamera RawI believe that we have gotten as close to an intuitive and simple to use method of working with RAW files as we are likely to see for some time. When RAW conversion finally becomes part of Photoshop itself, likely in the next major release, we will look back at the "bad old day" of having to use the ponderous and poorly designed programs that companies like Canon and Nikon provided us with, but definitely not with nostalgia.

But, it is by no means perfect at this stage. Because it is a plug-in it does not have full two-way communication with the main program and thus a few things aren’t as transparent as they might be. For example, when you rotate an image in the plug-in it does not end up rotated in Photoshop. You need to do it again there. Also, the file browser previews are too small to judge which of several similar files are to be preferred for conversion. And that’s about it for major criticisms. The interface is simple, feedback is instantaneous and the results are excellent. What’s not to like?

By the way,Camera Rawdoes not use Canon’s, Nikon’s or the other manufacturer’s SDKs (Software Development Kits). This is one of the reasons why it works so quickly, and why changes that you make to the preview image are reflected in real time, rather than having to wait for the SDK to reprocess the file. Kudos to Thomas for a remarkable bit of programming in decoding all of these various camera formats.

What About Capture One?

Naturally anyone with a Canon 1D or 1Ds will now be asking, how doesCamera Rawcompare toCapture One? I started using both programs back in late November and so I have quite a bit of experience with each of them. Frankly, my preference is forCapture Onebecause I find the workflow to be superior and the previews larger. But my guess is that when the RAW conversion capabilities ofCamera RAWare fully integrated into Photoshop these advantages may well be reduced. Whether the $400 price differential is worthwhilefor youis something that you’ll have to answer for yourself. If you own any other camera I can tell you that I know of no other RAW file conversion program or utility that can hold a candle toCamera Rawin terms of speed or convenience.

Reading a review such as this one can only give you a taste of what a product is like. Since there is no free trial your choice is to either risk the $99 or not. My recommendation though is that if you own any one of the cameras listed above, and also own Photoshop 7, this is the best $99 that you will ever spend. Recommended without reservation. You can find out more and download the plug-in (the cost is $99) fromAdobe’s web site.

By mid-month the newCanon 10Dhad started shipping, butCamera Rawdoes not have support for this camera built in. What to do?

There is a solution, but it takes a bit of work.Discussion ForummemberKen Dunhamhas published detailed instructions onhow to modifyCamera RAWto be able to read 10D files. I have checked withThomas Knolland he reports that the patch will work. But, please be aware that the 10D has a slightly different color space than the D60, so the temperature / tint sliders will not be calibrated accurately.

The proper solution will follow when the next version ofPhotoshopships withCamera RAWcapability built in. (No, I don’t know for sure when this will be).

Version 2.1of Camera Raw is now shipping for Photoshop CS