This article documents my experience field testing a pre-productionCanon EOS 1Dsover a 6 day period, from Wednesday, Sept. 25th through Tuesday, October 1st. It consists of five segments, written and published as the week progressed, as in a diary. No changes have subsequently been made to earlier comments, including some mistaken conclusions that we made. This is why you should read all five parts before drawing your own conclusions.

I was fortunate to haveThomas Knoll, the original author ofPhotoshopand a recognized expert in digital imaging, assisting me with this evaluation.

There is a segment inThe Luminous Landscape Video Journal’sIssue #6, which shipped in late November, showing the camera being used on a landscape and nature shoot, and an analysis by Thomas and me of prints produced with the 1Ds .

As of November 26th I now have my own full production 1Ds and will be using it extensively on various planned shoots in the days ahead. CheckWhat’s Newregularly for links to future related articles. 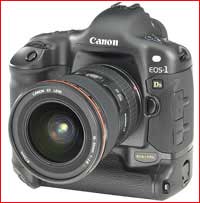 Regular readers know that this site was the first to publish a hands-on review of theCanon D30two years ago, theEOS 1Dlast year and again theCanon D60this past spring. Subsequently these were reviewed by me inPhoto Techniquesmagazine where I am a Contributing Editor. Now, thanks toCanon CanadaI have a pre-productionEOS 1Dsfor testing.

There are already several very good technical reviews and technical reports on the 1Ds online. I have no intention of repeating the specs and features that are so well described by my colleagues. You likely readThe Luminous Landscapebecause you know that I am a photographer first, and then a product reviewer. So what you’ll read here are my field impressions‚ how the camera handles, how it compares both to other digital cameras and to film, and simply what the camera is like to actually use.

The good news is, of course, that I have a 1Ds for testing and that Canon has not placed any restrictions on me in terms of my being able to publish and comment on images that I shoot with it. I’m afraid though that there are a couple of items of bad news.

When Canon U.S. issued its press release on September 24th the price shock was palpable. Within hours the message boards were filled with groans from the faithful. The 1Ds would have an $8,999 list price! Were they mad? (Potential buyers certainly were.)

Update:November 1, 2002: The U.S. retail price of the 1Ds has been set at $7,999. For a look at what this means see my article titledCanon 1Ds Pricing. The text below remains unchanged from its original form. No point in being revisionist.

In my opinion Canon were blindsided by the Kodak pricing announcement of thePro DCS-14n. Certainly they knew that the Kodak camera was coming, (hell, even I knew it was coming), but apparently not the price. At $4,000 theKodak 14nsimply makes Canon’s announced price for the 1Ds of $9,000 untenable. Differences between these cameras aside, you’d end up seeing many photographers (probably illogically‚ but nevertheless) selling their Canon systems to be able to switch. One can replace a lot of Canon glass with Nikon glass for the $5,000 difference between these two camera bodies.

My educated guess is that Canon will seriously re-price the 1Ds before it ships in November. The 1D will likely see a price reduction very soon, and the spread between it and the 1Ds can logically be no more than $1,000 to $1,500 (at most). This means that we should expect to see an initial street price for the 1Ds of about $6,000 – $6,500. There’ll still be a lot of grumbling, but this is a price point that Canon can likely justify to itself, its dealers and its customers‚ at least for the introductory period. Given the pace of change that we can expect during the next year or two we can only anticipate further price reductions as new competitive models come out from both Canon and others.

So, my word of advice to prospective 1Ds purchasers is, pre-place your orders, keep your fingers crossed, and hope that Canon indeed does the right and only sane thing in terms of pricing. Otherwise Canon will be jeopardizing its market leadership and credibility. (What were they thinking of with a price of $9,000. Really!)

If at some point during the past year if you’ve held or used a 1D you already know what the 1Ds is like. This camera has an 11MB CMOS imaging chip and a slower shooting speed of 3FPS. Otherwise they’re essentially twins.

Some years ago one of the automobile magazines when reviewing a new model Mercedes described it as being "Carved from a solid block of Unobtainium". That’s the way the 1D and 1Ds feel. Tough as nails, solid, heavy, water and dust resistant. Its reflexes are almost instantaneous. It features state-of-the-art autofocus and metering. What’s not to like (other than the price)?

I’ll have much more to say about the camera’s handling, controls, and firmware over the next few days.

A Comparison with 35mm and Medium Format Film

What would aLuminous Landscapedigital camera test be without a comparison with film? With an 11MP imaging chip producing a 32MB file, and full frame to boot, the 1Ds cries out for a direct comparison. This is the first thing that I was interested in testing. So, here it is. 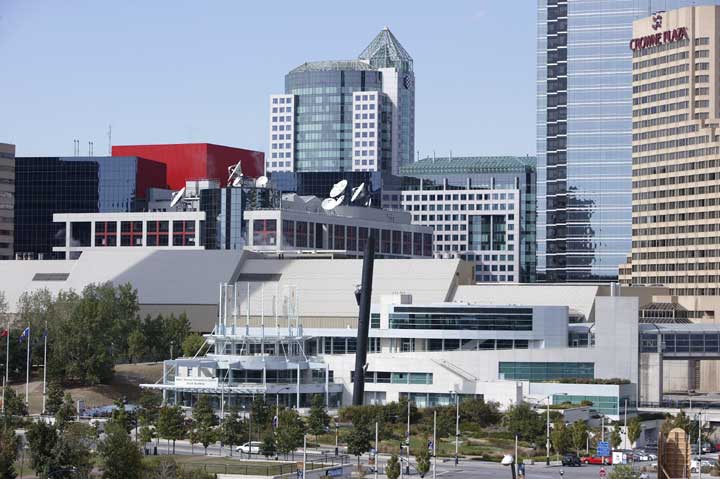 Above is a view of part of downtown Toronto taken with the 1Ds. I took the same shot with a Pentax 645NII, a Canon 1V and a Canon D60. (There’s no point is showing the 35mm and 645 film versions since at this size they’re essentially indistinguishable). The digital frames were shot at ISO 100 and the film was Provia 100F. Film scans were done with anImacon Flextight Photoscanner at 3200 PPI. As I’ve stated before, this scanner is as good as and likely superior to the film scanners that most photographers use.

Unfortunately when I got back to my office after an afternoon of testing I suffered from a serious case of brain-fade and accidentally erased the Canon D60’s Microdrive before I had a chance to copy the files to my computer’s hard disk.Duhhh!So, the comparison today will be between the 1ds and both 35mm and 645 film. Tomorrow I’d do a fresh test of the 1Ds Vs. the D60. 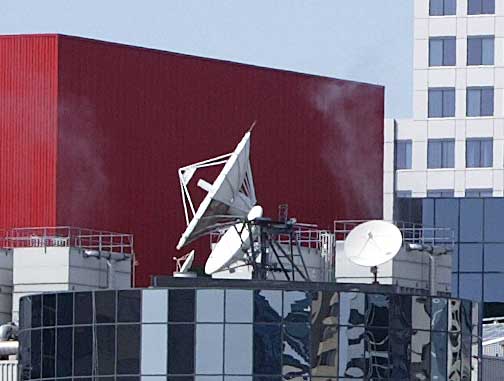 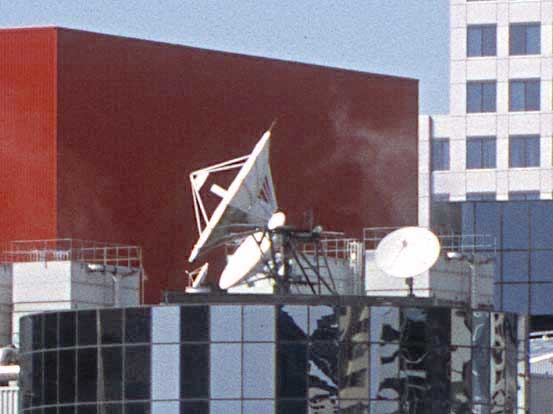 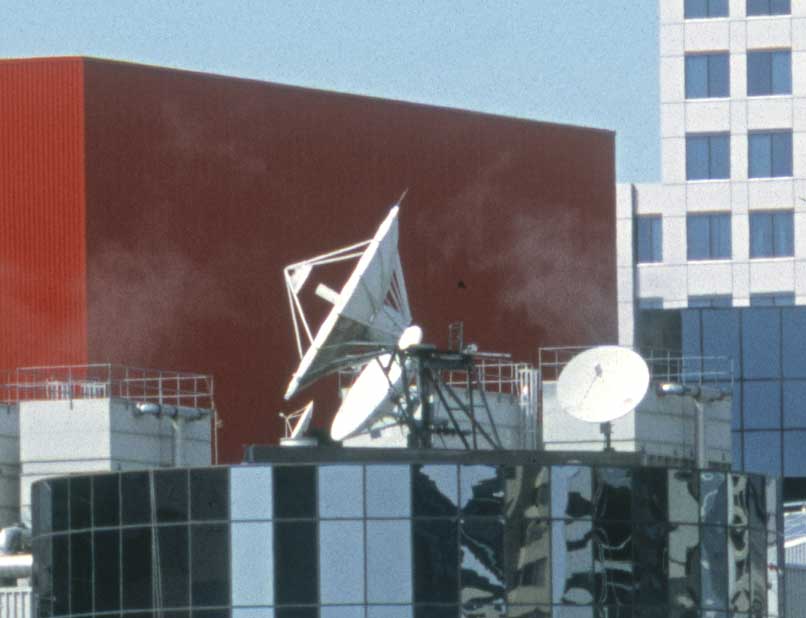 What do we have here? Above you’ll see identical crops of the scene shot. Each is at 100% magnification. What you see therefore is the relative size that each maximum sized print would be. The 1Ds’ file size is 31MB. The 35mm film scan has produced a 35MB file and the 645 scan produced a 100MB file.

The difference in size between the 1Ds’ 31MB file and the scan at 35mm is negligible. But what can be clearly seen is that the 1Ds’ image is significantly higher resolution than that of the the scan. (Note that the same lens Canon 70-200mm f/2.8l IS lens was used at the same aperture, and because the 1Ds is full-frame the image size recorded is identical (no magnification factor to confuse things.The difference in resolution is therefore solely due to the camera / imager and no other factor). Also, the 1Ds’ digital image clearly has less "grain". The sky is essentially noiseless. Not so at this magnification for the 35mm film.

The 645 scan clearly can produce a significantly larger file, and while the resolution seems more or less comparable to the 1Ds’, again the grain in the sky is clearly inferior.

Now, before you start jumping up and down saying that this is confusing and unfair because the sizes are different, below is the 645 scan reduced so that it is the same size as the 1Ds image. On my screen at least (and in test prints) the resolution is not as good as that of the 1Ds and the grain in the sky is still visible. 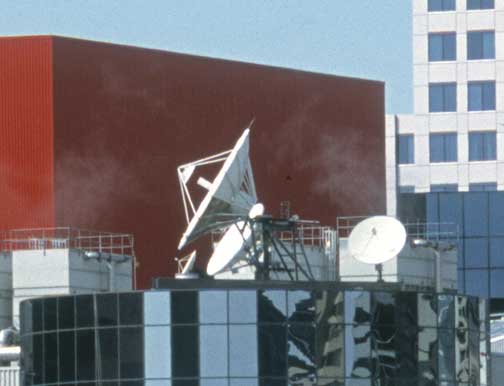 Frankly, my initial impression of 1Ds images is extremely positive. There are still many things to explore, but I find little to fault at this point, and much to be very impressed with.

Of course there will now be a chorus of those who say, "Ya, but a drum scan would have really shown a bigger difference in favour of film." Humm. Maybe. But here are my thoughts on this recurring topic. I have had drum scans made from my 35mm and medium format film on several occasions. Yes, an 8000 ppi scan is impressive, and can make bigger prints. But, I’m also convinced that while they give me more pixels, I don’t get a whole lot more real data. There simply isn’t that much more information on film than about 4,000 PPI. Above that we get bigger files, but not much more information. Maybe, 20% more than the 3200 PPI scans that myImacon Flextight Photoscanner is capable of, but not 2 or 3 times as some inexperienced people presume from the numbers. Also, such scans are huge, 500 or 600MB and almost impossible to work with. Oh yes, these scans cost hundreds of dollars each. How many of these are you going to make on a regular basis?

Finally, resolution is but one factor to consider. Noise (grain) is in my opinion of as much if not more significance, and digital files from cameras like the D30, D60, 1D and 1Ds are clearly superior to film in this regard at 100 ISO, and at higher speeds there’s no contest‚ film loses hands down. Dynamic range is another critical factor, and I plan to explore that further over the next few days.