Both lenses started shipping in late May and I had an opportunity to use them on location photographing moose and other wildlife as well as landscape in Algonquin Park in northern Ontario. These lenses have also been subject to a bench test usingDxO Analyzer. This is a review of the70 – 300mm f4.5-5.6 DO IS. My review of the28 – 300mm f3.5-5.6L ISis availablehere.

Whenever I publish a Canon lens test report I am asked the meaning of all the letters and numbers in the lens’ name. Here is a brief guide:

EF— This refers to Canon’s electronic lens mount, used in all Canon camera since 1987. The previous mechanical lens mount carried the letters FD.

f/3.5-5.6— this is the range of the maximum aperture of the lens, in this example f/3.5 at the lens’ wide angle setting, changing to f/5.6 at its longest focal length. A prime or zoom lens with a fixed maximum aperture will have just a single F stop shown in the name.

L— Canon’s designation for their top-of-the-line lenses is the letter L. These lenses are the best that the company knows how to make at any given focal length and aperture, and of course for a given price (which in the case of L series lenses is usually high).

DO— stands for Diffractive Optic and is used on Canon lenses which utilize a unique diffraction grating to control chromatic aberration and reduce lens size and weight.

IS— indicates that the lens utilizes Image Stabilization, which reduces vibration as much as 3 stops, allowing hand holding of long lenses at much lower shutter speeds than would otherwise be possible.

USM— stands for Ultrasonic Motor, a technology that uses sound waves to position the lens elements when focusing. This reduces size, weight and power consumption of the autofocus mechanism as well as increasing speed and allowing for manual override.

An Observation on Maximum Aperture

During most of the 20th Century photographers wanted one thing above all else — faster lenses. We fought for light, spends hundreds more for an f/1.4 lens over an f/1.8. A 300mm telephoto that was faster than f/5.6 was to be coveted. Also, the quality of zoom lenses during the ’70s and ’80’s when they started to become popular wasn’t that great, and serious photographers only wanted primes. Fast ones at that.

Well, that was then and this is now. Because of advances in computer-assisted lens design and also the use of exotic glass elements, zooms lenses have become very good indeed. The best ones arealmostas good as the best primes, and much more versatile. But they are relatively slow. In fact few if any manufacturers are even producing new prime lens designs anymore, and some are even being discontinued due to slow sales. (Get ’em while you still can). New lenses like these two high-end zooms are indicative of how manufacturers are no longer fighting for speed. People would much rather have smaller, though slower lenses, not faster ones.

Why? Because digital SLRs are so much less noisy (grainy) than film was. Shooting at ISO 400 is now consideredeveryday, and if a photographer sees almost any noise at this speed they get upset. Even ISO 1200 is considered usable. This was certainly not the case with colour transparency film (though colour neg was a bit better). In any event, no one thinks twice now about shooting at ISO 400 or higher, and so fast lenses simply aren’t as necessary for the typical photographer as they once were.

One area that has suffered though is in viewfinder brightness. Reduced frame DSLRs have dimmer viewfinders than film cameras or full-frame digital SLRs like the 1Ds, and when you combine this with a slow maximum aperture zoom the viewing can get dim indeed. Such is progress. 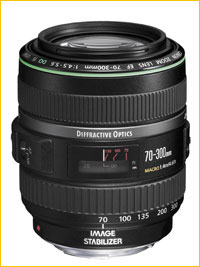 This is only the second DO lens available from Canon. The first was the controversial400mm f/4 IS DOintroduced a few years ago. When I tested that lens I was quite impressed. I saw little in the way of artifacts from the use of the then brand-newDiffractive Opticstechnology. Image quality was very high, and the savings in weight and size certainly were appealing. Since then I have been in touch with two active wildlife and nature photographers who have used this lens extensively over at least a couple of years, and they have nothing but praise for it.

The first thing that strikes you when you first pick up this lens is how small and light it is. At 720g and less than 100mm in length when closed, you’d think you were holding an 80mm lens. The diameter is small, utilizing a 58mm filter thread. The lens’ finish is black, with the green stripe first seen previously on the 400mm lens; the mark of a DO lens — the way that the red stripe is the sign of an L series lens.

Zooming is via a rotating rubberized collar close to the lens mount, and because of the use of USM manual focus override can also be used at any time. On the right side of the lens is aLockswitch that secures the lens in the 70mm position to prevent it from accidentally extending while being carried. Regrettably, it only locks in the minimum focal length position. There are the usualImage Stabilizationswitches on the left side of the lens, for turning IS on and off and for switching IS modes. Note that this lens uses Canon’s third generation IS which does not need to be switched off when the camera is tripod mounted. The advantage of being able to turn IS off when not needed though is that it saves battery power.

Surprisingly, and unlike most recent high-end Canon lenses, this lens does not feature a rubber O ring on the lens mount. The minimum focusing distance is also a rather disappointing 1.4 meters. The lens is not compatible with Canon’s 1.4X or 2X Extenders.

This test of the 70 – 300mm f4.5-5.6 DO IS lens was conducted usingDxO Analyzer. If you are not familiar with this optical testing system please readthis tutorial. Without being familiar with how the tests are conducted, and how to read them, there’s not much point in proceeding. 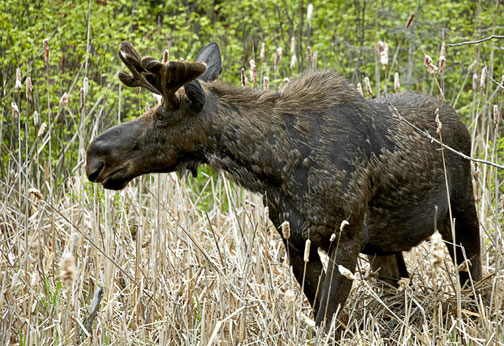 This lens is truly a pleasure to use in the field. Its small size and light weight (for its focal length) are real plusses when hiking. I shot several hundred frames with it over a two day period and even under close examination never saw any artifacts from the DO elements. My friend, photographer and naturalistBill-Caulfield Browne, was shooting with me on this trip, and he has owned and used theCanon 400mm f/4 IS DOsince it first was introduced. He has nothing but praise for it, though in reviewing some prints which he’d brought along we could occasionally see some curiously patterned out-of-focus areas which are clearly DO artifacts. None could be seen though on subsequent examination of prints from the 70-300mm DO, so Canon has obviously been doing its homework in the two years between these lenses. 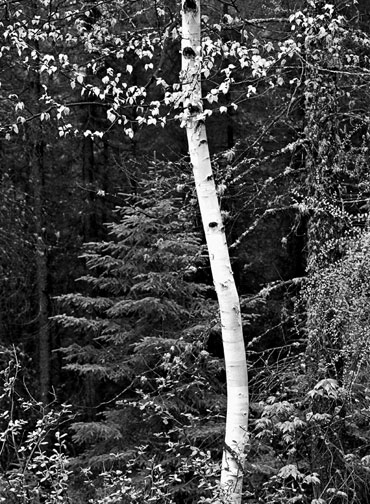 As you can see from theDxO Tutorialthere are a large number of charts and text graphs produced for each of the tests —Distortion & Chromatic Aberration,Vignetting, andBlur. (Noise is excluded here because it is only relevant to testing sensors). A more comprehensive test would have to be done at all available apertures, all available ISO speeds, and at a large cross-section of focal lengths (in the case of zoom lenses). This would not only take an inordinately large amount of time to conduct, but would take up far to much space here and likely not be of much interest.

In the case of zoom lenses this test is done at a mid-position in the lens’ focal length range. I also post data for other F stops, ISO ratings and in the case of zooms a selection of focal length, including the widest and longest. In my comments to each section I also draw attention to extremes of performance, such as maximum vignetting, greatest and least noise, etc.

To jump directly to the definition and tutorial for a specific test click on theDC,VorBlogos. 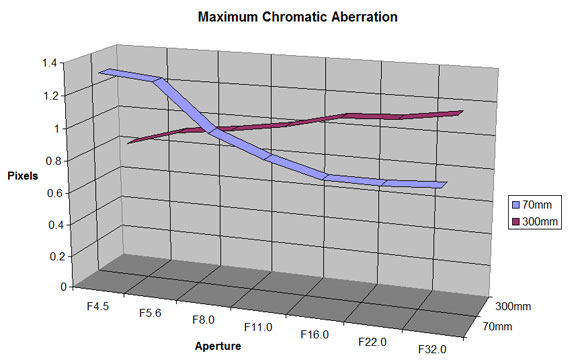 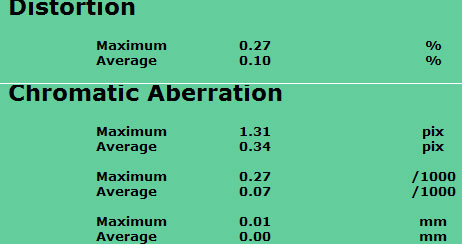 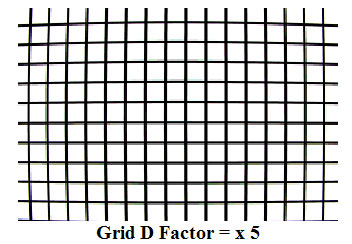 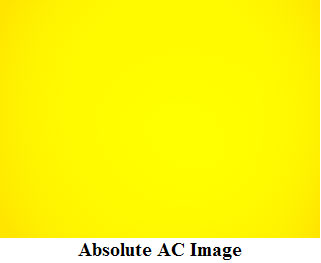 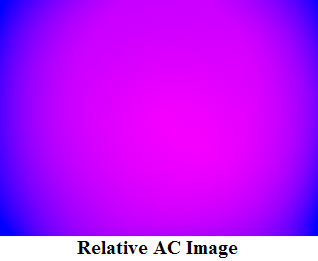 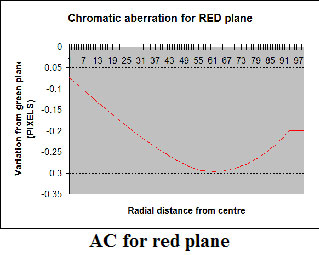 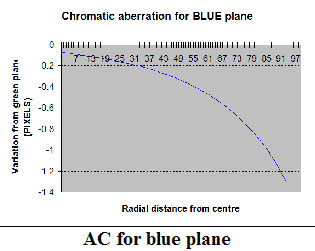 Chromatic Aberration is moderate, and unlikely to be an issue on prints under most circumstances. 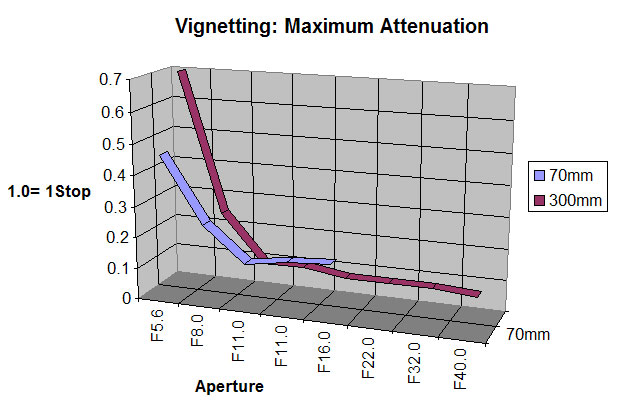 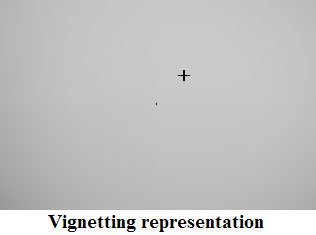 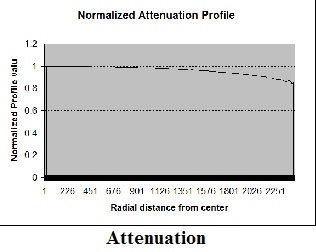 Vignetting is moderate, and not an issue except when the lens is used wide open, and even then is reasonably well controlled. Surprisingly it measures higher at 300mm wide open than at 70mm, something that is usually not the case with most zoom lenses. 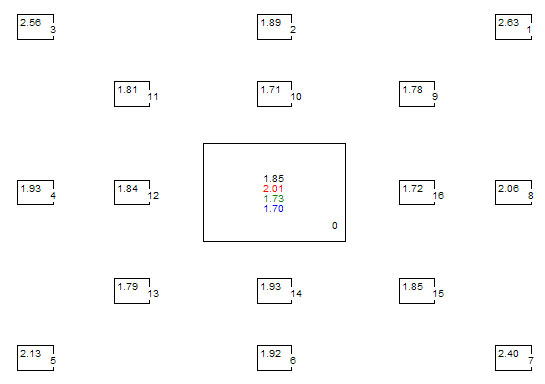 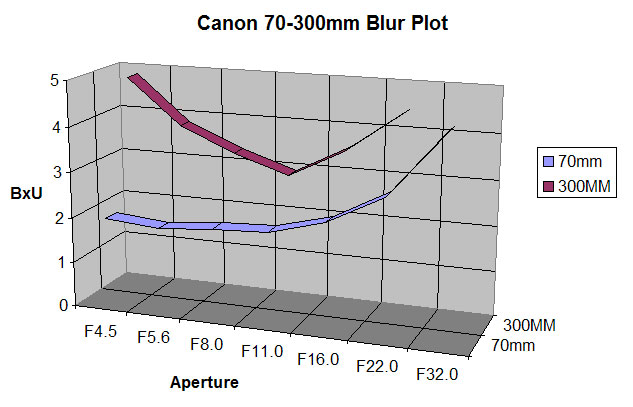 This lens measures well for blur. It is typical of a good quality medium telephoto zoom. As always the best aperture for sharpness is a couple of stops down from wide open, and at small apertures diffraction effects start to degrade image quality. F/5.6 is the best aperture when the lens is at its widest focal lengths and f/16 is the sharpest aperture at 300mm.

This is an appealing lens in many ways. It measures reasonably well, and though the price is a bit high it is appropriate for what you get. The low weight and small size are real plusses. Resolution appears high, but I have to admit that on-screen and in prints I see a certain "softness" to images produced by this lens that doesn’t show up in lab measurements.

A bit of experimentation shows that it definitely isn’t lack of resolution, but rather a softening ofaccutanceas compared to non-DO lenses. I found that this can be easily compensated for by using a moderate amount of additional sharpening in post-processing. With my preferred sharpening program,Photokit Sharpener, by usingEdge Sharpen 1in addition to normalInputandOutputsharpening I was able to get results that are very close to those produced by a non-DO lens. I would imagine though that users who do not take the time and effort to applyappropriatesharpening to files produced by this lens may find the results disappointing. Those that do will be rewarded by crisp images and the pleasure of using a very versatile lens.

If I didn’t already own the superbCanon 70-200mm f/2.8L ISI’d be very tempted by the new DO, since I’ll take the trade-off of 2 extra stops of aperture for the extra focal length any time. Nevertheless the70 – 300mm f4.5-5.6 DO ISis a very appealing lens indeed.

In Europe, this year is one to commemorate the beginning of the Great War, with much reflection about the political and cultural atmosphere leading up