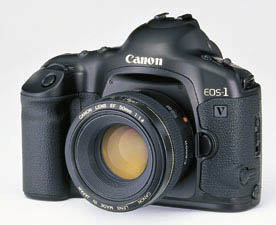 In early April, 2000 the CanonEOS-1Vstarted to become available in Canada — right on schedule, and somewhat ahead of the U.S.They should be available in most markets though before the end of the month. I had placed my order in February, when they were first announced, and was therefore able to get one of the first ones shipped.

The following review is made from the perspective of an EOS-3 owner. I’ve been using two of these bodies for the past year or so, one of them with the PB-E2 motor base. I’ve been fairly happy with them, but with a few gripes. The EOS-1V seems to have addressed several of these.

Note that this review is not intended to be exhaustive or to list all of the camera’s features. These are available from the brochure or the on-line specs (see below). Instead, I’ve attempted to describe the differences and most apparent advances that this new body has to offer.

At first release in Canada in early April the camera was selling for $2,850 CDN. This translates to approximately $1,899 U.S., which is by coincidence the price listed byCalumetfor the 1V. My guess is that there will be a slight softening of this price as availably meets demand, likely some time in late summer 2000.

The 1V is from the EOS-1 idiom. It’s a pro camera with exceptional build quality. I guess the easiest way to describe it is as a cross between the EOS-1n and the EOS3 — with the build and looks of the former and the new electronic capabilities of the latter. The body comes in two versions; the EOS-1V and the EOS-1V HS. The HS model is simply the same thing but packaged with the PB-E2 Power Drive booster, (which can be bought separately).

Canon differs from Nikon in one philosophical way. Whereas Nikon typically puts its latest technology into its high-end cameras, Canon does so with its second-tier models first. This allows them to test new features and capabilities before putting them in the demanding hands of pros. The year or so that the EOS3 was on the market before the 1V came out has allowed Canon to include the latest features in the new model and to fix whatever needed fixing.

For anyone who is familiar with either an EOS-1n or and EOS3 the new EOS-1V is instantly familiar and comfortable. I was able to shoot a test roll, utilizing almost every feature, before even opening the manual. Anyone using multiple mixed bodies will not suffer any confusion.

Build quality appears exceptional. As we all know by now the 1V has rubber gaskets on every button, knob and body orifice, which makes the camera virtually waterproof. While it’s certainly not an underwater camera it’ll likely withstand splashes and heavy rain without a qualm. In late May 2000 I took an8 day rafting trip on the Colorado Riverand the 1V came through with flying colours. The camera really appears to be as waterproof as Canon claims.

Cosmetically the camera appears very similar to the EOS-1nƒâ€˜ more rounded than the EOS3. It’s slightly heavier but otherwise similar in its other dimensions.

From a usability standpoint I first noticed that the white lettering on the various knobs and buttons is larger, thicker and clearer. The confusingIandOsymbols have been replaced with the wordsONandOFF, both on the power switch and the rear multifunction dial. A welcome addition to the LCD display is a battery condition indicator. This is activated every time the camera is turned on. Preferable to the separate switch under the palm door of the EOS3.

Speaking of the Palm Door, this has been redesigned so that it’s much more difficult to open accidentally. I often would snag my gloves on it when shooting in cold weather. Now, this is almost impossible.

One of the very welcome additions over the EOS3 is the inclusion of an eyepiece diopter adjustment knob. I understand that the EOS3, because it includes Eye-Focus-Control, does not have room in the prism housing for the inclusion of a diopter wheel. Be that as it may, I frequently switch between shooting with and without glasses, and having to exchange eyepieces on the 3 was a drag. The 1V also has an eyepiece shutter for time exposures, and the included rubber eye-cup locks into position as well — both welcome additions. 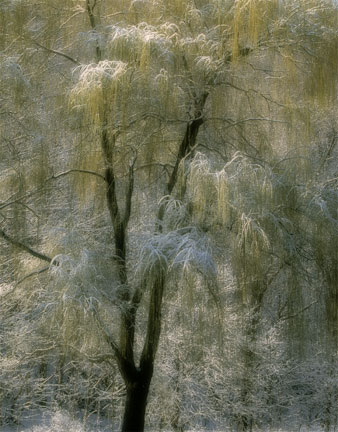 One of the first frames taken with the new EOS-1V. Clickherefor a discussion on how this shot was made.

As I started shooting with the 1V one of the first things that I noticed was the shutter sound. It’s a much smoother sounding shutter and mirror than any previous Canon EOS body. It has a precision sound that is one I equate with Leica SLRs, not Canons. I’m also told that the shutter response time has been improved, and that to allow up to 10 FPS on the motor drive the mirror assembly has also been redesigned and improved. This is noticeable.

Canon has carried the concept of custom functions to an almost silly extent. One can virtually alter every operational aspect of this camera. Most users will want to alter very few of these, but one very worthwhile addition on the 1V is what Canon callsCustom Function Groups. These allow one to set up to three separate combinations of any of the custom functions. For example, one for macro work, one for telephoto work, etc. I’m sure this was added as a result of user feedback.

Surprisingly though, Canon hasn’t integrated controls such as focus mode, drive mode and the like into these groups. I would find this very helpful, as would most other photographers, and so it is hard to understand why this capability was omitted. It’s justSMOP— aSmallMatterOfProgramming 🙂

If one owns one of the new super-telephoto IS lenses it’s worth noting thatCustom Function 19is now a standard addition rather than a service-center reprogramming task.

Then, for those that require even more custom control there’s theES-E1 Link Softwarewhich allows connecting the 1V to a PC, subsequently allowing anadditional30 custom functions to be set.

One new associated feature which Iamlooking forward to (this software isn’t due out until summer) is that it allows data from every roll shot shot to be downloaded to a PC. This takes a bit of explaining.

As it comes, the 1V imprints two data items on the leader of each roll of film. The first is a user-settable number between 00 and 99. This allows you to identify the camera body used for that roll, or say, a particular location. Second, is a sequential number between 001 and 999 which identifies the roll shot. This number is set automatically by the camera each time a new roll is loaded.

Having rolls of film sequentially numbered isveryhandy. I often come back from a shoot with 30-60 rolls of film and find it tedious and confusing to sort them into order for editing purposes. This makes the process a snap.

Finally, the camera records in its internal memory chip 17 different data items, including exposure details, metering mode used, flash modes, and so forth. With theES-E1 softwareall of this can be downloaded to a PC. The camera has RAM enough to store this data for up to 99 — 36 exposure rolls. Now, when someone asks you what shutter speed and f/ stop were used for a particular shot, you just need to check your PC 🙂

The 1V is some $700 U.S. more expensive than the EOS3. But, is it worth it? If you need the most rugged EOS body made (and the EOS 3 is no slouch in this department), and you need a virtually waterproof camera, then the 1V is worth the extra money. If you think that eye-control-focus is for you, then of course the EOS3 is the necessary choice. If you want the latest and greatest toy with the most gizmos, then again, the 1V has your name on it — but at a price.

Just remember the obvious — a camera is just a light-tight box for exposing film. While I enjoy beautiful tools like the EOS 1v and the EOS3, they really are simply something to hang a lens on. Don’t spend all of your money on a camera and then neglect your lenses. The glass that you use plays amuchmore important roll in producing quality images than does the camera body. The lenses are why you bought into the Canon EOS system in the first placeƒâ€˜ right?

With the introduction in early 2000 of Canon’s new flagship camera, the EOS-1V, theEOS-1nhas started to fade into history. But, it has been such a stalwart of the pro and advanced amateur market that it could be many years indeed until the last of them are retired from service.

Jim Erhardt, publisher of the excellent web siteNature Photographers.nethas contributeda reviewof the EOS-1n which should help newcomers to the marque become familiar with the camera’s features and capabilities. 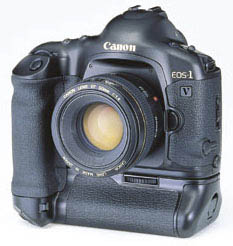 Announced at the PMA show in Las Vegas in early February, 2000, theEOS-1VbecomesCanon’snew flag ship camera. There is a press release link below that covers the camera in detail. I have mine on order and as soon as it arrives I’ll post a comprehensive review. This should be in April, in time for my planned 8-day white-water rafting trip through theGrand Canyonin May, which should give it a real work-out.

This new cameras body is evolutionary, not revolutionary. Think of it as a merging of it as anEOS1nwith the features of anEOS3,with some enhancements thrown in. Apparently the1nwill continue in the Canon line-up for the time being.

Just a note that the choice of name for this new camera is very clever. It’s a pun on the fact that this is Canon’s fourth pro-bodiedEOSand therefore deserves the appellation of a Roman numeralIV, and of course it continues the use of the number1for their flagship body.

According to a Canon U.S. press release the EOS-1V SLR camera will be available in two configurations: body only and also as a kit with Power Drive Booster PB-E2 (called the EOS-1V HS) at camera retailers in April at suggested list prices of $2,900 and $3,400 respectively. The EOS Link Software Connection accessory will be available in the second half of the year and will have a suggested list price of $250.

A press release by Canon U.K. is reproducedhere. It details the camera’s specs and offers some insights into Canon’s design thinking.

Left and Right Brain In my previous article, Understanding the Left & Right Brain, posted on the site in October 2013, I discussed two major