Every photographic trip is an education. One thing that I always learn is what equipment worked out, and what was either ineffective or redundant. Two weeks shooting several thousand frames in a foreign country under adverse conditions can tell me more about a given piece of gear than a year or more of occasional use at home.

Ideally I’d like to take my full equipment cupboard on every shoot, Working close to home and from my car I can almost do so, bringing a mixed bag, so to speak, with a variety of lenses and bodies so as to have whatever may be needed for a given situation. But the weight restrictions of flying, not to mention moving in and out of hotel rooms, planes, busses, boats and cars, means paring ones kit down to anticipated essentials.

Anticipatedis the watchword. But when traveling to an unfamiliar location it can be hard to anticipate what may be needed, and invariably I bring more than I need.

Here then is what I used on my photographic expedition to China in late 2005; what worked, and what didn’t. 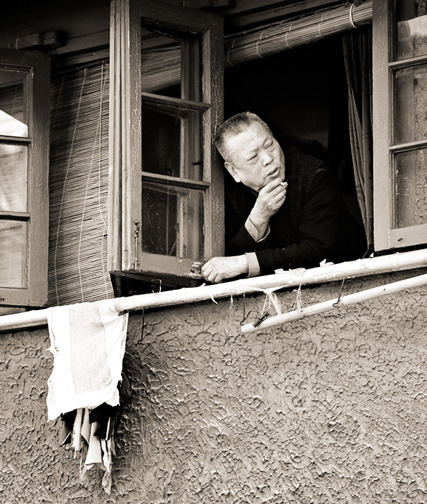 I used theThink Tank PhotoAddicted to Airportsbag for the first time on this shoot. I will have a review of this new bag in a separate article shortly. It arrived literally the day before I left for China. I transferred everything that was in my Moose Peterson MP-1 bag, and it was an equivalent fit. Both bags are as big as one can legally carry onboard an aircraft.

The bag contained the following…

In addition I carried my Gitzo 1439 tripod with Gitzo Leveling Base and Really Right Stuff BH-55 ballhead, packed in my clothing duffle bag. In a separate briefcase I carried an Apple 12" Powerbook, a Lacie 60GB hard disk and Lacie 80GB hard disk, an Epson P2000, and a pair of small Canon IS binoculars. A Palm PDA and a Garmin GPS filled out the briefcase along with the usual travel documents, books and magazines. All of the cables and chargers needed were packed in small stuff sacks, which were carried in the clothing duffle. The duffle also, obviously, contained enough clothes for two weeks on the road.

The 400mm, 50mm, 24mm T/S and flash all proved to be redundant. I’d brought the 400 in case there were landscape opportunities that required compression, but 300mm proved to be enough. The 50mm was for available light work, but was used only once and without worthwhile affect. The flash went unused, and the 24mm T/S, which I’d brought along for architectural work, never saw the outside of the bag.

My most used lens was the new 24-105mm f/4L IS. The range is versatile, the speed adequate for most situations, the image quality is excellent and the stabilization adds at least two stops of hand-holdability. The lens is light and small enough to be carried all day, especially when mated with the 5D body, which it seems to have been designed for in terms of size and balance. My Canon 24-70mm f/2.8L is probably the superior lens optically, but the new 24-105 wins hands down for versatility.

It may seem strange that I carried two medium zooms, the 70-200mm and the 70-300mm, but these are quite different animals and serve completely different purposes. The 70-200mm is a far superior lens optically; possibly one of the finest medium zooms ever made. But it is large and heavy, and not terribly well suited for walk-around shooting, especially all day when hiking, or in a city. For landscape work though it is unparalleled.

The 70-300mm DO won’t win any prizes for resolution, and has somewhat lower contrast than a regular lens, but when it comes to size, weight and versatility it is a champ, and has during the past 18 months become one of my most used lenses. Probably 35% of the shots in my Bangladesh book were done with the DO.

The 1Ds MKII needs no introduction. It is the top of the Canon line-up, and arguably the best 35mm digital camera ever made, (for my needs, that is). But, it is big, and heavy, and after a day of hiking mountain trails or walking city streets your shoulder and wrist will ache with the weight.

The new 5D is its ideal counterpoint. It’s 13 Megapixels vs. 16, and 3FPS vs. 4, but the real tale of the tape is when it comes to weight and bulk. The 5D is hardly larger than a 20D, or any other reduced frame DSLR, and almost identical to Canon’s last 1 Series film camera, the 1V. The viewfinder is big and bright, and when mated with either the 24-105mm or the 70-300mm, one can walk around shooting all day and not feel the load. While I can just barely see the resolution difference between the MKII and the 5D in some images, frankly, it’s a quibble.

On the China shoot I chose the MKII when I was shooting landscape work on a tripod or working in very heavy rain, because of the extra waterproofing. But I also used the 5D on a rainy afternoon of hiking in the mountains, and it never skipped a beat. The 5D was my main body for when I was shooting hand-held, and likely was used for 70% of the images taken on this trip. 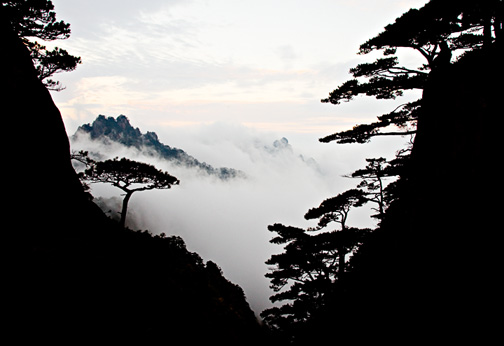 This new pocket digicam came my way just about a week before this trip, and it lived in my vest pocket all of the time. It is the first true 16:9 format digital camera, and has 8MP resolution and an excellent LCD, and Leica lens. It is also the smallest digicam currently available that shoots in RAW mode. Myfield reportis now onlie.

I used it for snapshots as well as a bit of urban shooting and landscape work, and it quickly became a favourite. After seeing it in use at least half the members of our expedition decided to buy one once they got home. It’s that appealing.

Noisy? Yes. As reported by DPReview, it’s noisy. But, so what? A run though a noise reduction plug-in such as Noise Ninja makes that a non-issue, and frankly the current fixation by many photographers with noise, any noise, is a distraction from the real job of capturing images with the most versatile tools available.

Of course I could have cut the weight of my bag in half by leaving behind those lenses that I didn’t use. But then, I didn’t know beforehand what my needs would be. This is often the case, and it’s always my preference to err on the side of too much gear on a remote shoot, than too little. What I did use worked perfectly for me.

You can read about my file management workflow in the article titledWhen Failure is Not an Option.