This subject is now featured inVolume 1,  Number 1of The Luminous Landscape Video Journal.

A Digital Day at The Zoo

A very gray, rainy November afternoon. I needed to do a survey of theToronto Zoofor an upcoming shooting project, so even though it was pouring I put on a rain slicker, hat and waterproof boots and headed out to the east end of the city.

On the way out the door I grabbed theCanon EOS D30and put on theCanon 300mm f/2.8L ISlens. The speed of this lens and its reach with the 1.6X magnification factor of theD30would make it the equivalent of working at almost 500mm‚ just right for isolating animals from their backgrounds, especially at this lens’ maximum aperture of f/2.8.

Zoos have become somewhat politically incorrect these days, and I haven’t been to the one in my hometown of Toronto for several years. It was fun. Even dedicated wildlife photographers can’t get to Zambia for Lions, the Costa Rican rainforest for Jaguars, or Churchill, Manitoba for Polar Bears very often. Most people‚ not at all, not no how, not ever. So shooting at a zoo is an appealing alternative and great practice for when one does get into the field. 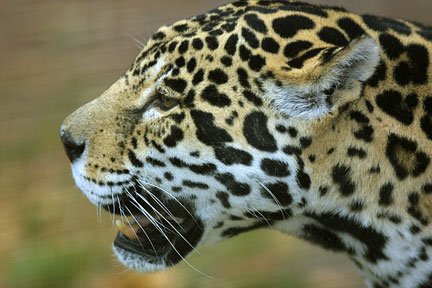 This spotted Jaguar was pacing back and forth in its enclosure. I was only about 15 feet away, and shooting at an effective 500mm the wire mesh fence simply disappeared.  This is one of the tricks of shooting wild animals at a zoo‚ a long lens at a wide aperture.

Given that the cat was pacing and I was panning with it,andthe shutter speed was only 1/125 sec, the sharpness of this photograph is astonishing‚ a testament to Canon’s Image Stabilization technology. I also want to draw attention to the fact that all of these photographs were taken at ISO 400, with grain/noise that appears to me in large prints (13X19") to be no worse than what I’m used to from ISO 100 film. Remarkable. Oh yes‚ all of these photographs were handheld. 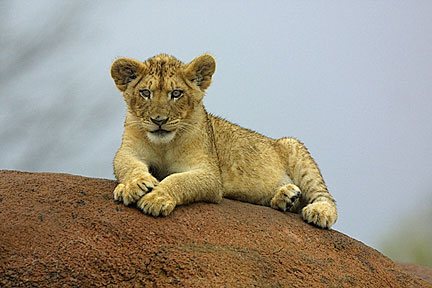 Two lion cubs were born at the zoo this year. This cub saw us coming and climbed to the top of a mound to check us out. At this point it had started to rain heavily and the cub, as you can see, was getting pretty wet‚ as were we. The 300mm lens is one of Canon’s new generation pro lenses with heavy weatherproofing. The D30 isn’t, but it stood up very well to getting wet. No problems at all. 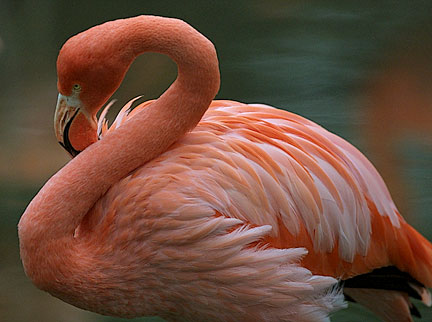 In some 90 minutes of shooting before the rain became too heavy, I took about 75 frames. Of these about a third were soft because of poor focus. The fault was not the D30’s, it was mine. The depth of field with a long lens like this one at such large apertures is extremely narrow, particularly when working close.

Here, the point of focus is the foreground feathers. In a large print you can see that the eye and beak are slightly out of focus. An appealing image, regardless. 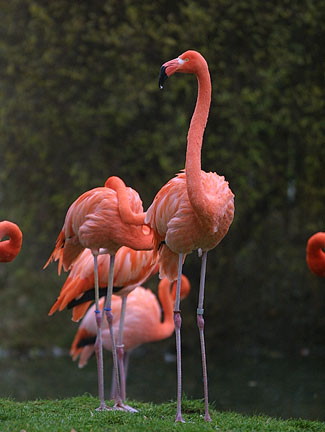 There were so many interesting flamingo pictures that I just had to include a second one. What strange creatures. 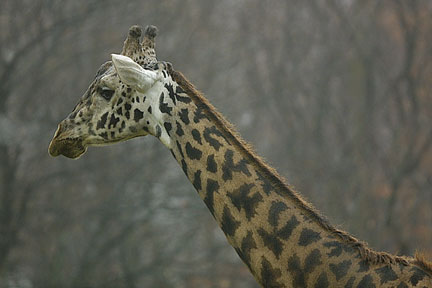 This soft brown-toned photograph is an excellent example for judging the D30’s ability to handle browns and earth tones‚ something that is not always easy for film to reproduce with accuracy.

Several of these photographs are also interesting to examine because they show how the 300mm lens handles out-of-focus backgrounds; "boke"as it’s called. Thebokeof this lens is very smooth and appealing. 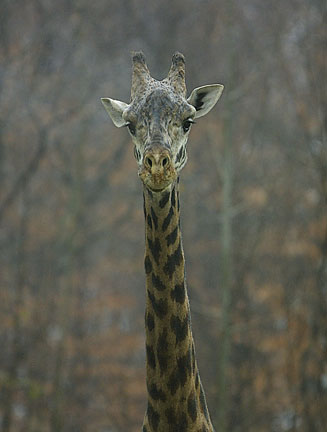 This photograph cracks me up. I know it’s not polite to laugh at poor defenseless animals, but this guy’s a hoot.

On a final technical note, all except one of these photograph had minimal colour or any other correction from the RAW image. All had sharpening done withnic Sharpener Pro. Most had about -15 units on the blue channel (+ 15 yellow) to correct for the heavy overcast. The only other alteration was in the photograph of the lion cub where a bit of burning-in was done to bring out detail in the cub’s eyes.

For more photographs like these, all taken with the D30, please have a look at my photo essayCaptive Wildlife.

This subject is now featured inVolume 1,  Number 1of The Luminous Landscape Video Journal.