Doing it at Night

Most landscape photographers put away their cameras at night. I usually am among them, though from time to time I’ve tried my hand atstar trails,auroraormeteor showers.

Part of the reason that photographers don’t shoot more after dark is that when shooting film it’s very difficult to judge how the results are going to turn out, and experimentation takes time, effort and good note taking. You’ll try a few different exposures, noting all of the variables, but then it may be a day or two, or even a week or more until you sit down with the results and see how things have turned out. I prefer more immediate feedback.

Digital cameras change all of that. Now we can take long night-time exposures and immediately explore and take note of the variables, such as colour shifts, and of course the proper exposure needed.

Below is one frame from a series of tests done to determine how theCanon D60performs under nightime shooting conditions. 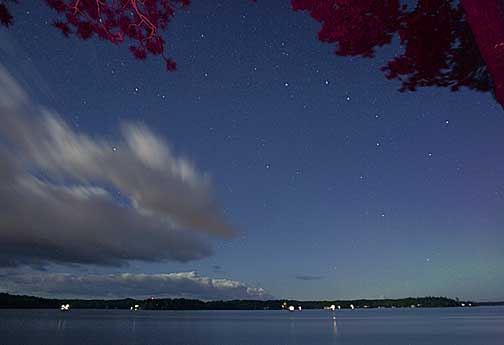 The first couple of generations of digital cameras weren’t terribly good at long exposures. They became very noisy very quickly. With the introduction of Canon’s D30 in late 2000 things improved quite a bit. The D30 had a long exposure mode which significantly reduced long exposure noise, but it was at the cost of doubling the exposure time due to in-camera post processing. I was able to do 15 second exposures at ISO 400 that were just acceptable, but much longer than that and the noise started to become a major factor.

Canon’s D60 has raised the bar again. The above photograph (click on it to see a larger version) was taken at ISO 400 with a 30 second exposure. The noise level is very low.

How It Was Taken

The photograph has taken at 10:40pm on August 19, 2002 in Muskoka, Ontario (exactly on the 45th parallel). As you’ll see by noting the Big Dipper in the frame, the view across the lake from the deck of my summer home is to the northwest. The sun had set some two and a half hours before. There was an 85% full moon in the south at an elevation of 20 degrees. All of this is by way of saying that it was dark, well after sunset, but with a bright moon.

I used a Sigma 14mm lens, wide open. On the D60 this gives the same field of view as that of about a 22mm lens. The 30 second exposure is the longest that can be taken with this focal length without the stars starting to streak. (See below about the "Rule of 600").

There are a few things worth noting, both on the esthetic and the technical level. What gets my attention first is that in this photograph I was able capture quite a few of the brighter stars, while at the same time the moon created a night-time look that was nevertheless bright enough to nicely illuminate the foreground lake. The clouds in particular look lovely because of the moon’s illumination. Their smearing is caused by movement during the half-minute exposure. The bit of red illumination in the overhead trees is from a 5 second "paint" with a tiny button-sized red LED flashlight that I keep attached to the camera’s neck strap. 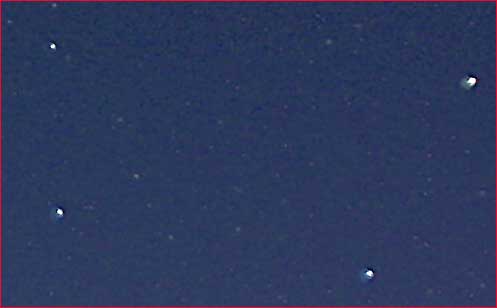 There are a few things worth noting in the enlargement above. The first is the low digital noise. I was very pleased with the D60 in this regard. If I did a bit of work on the file I could easily clean it up and make it virtually noise free. The other thing that I see is a bit of "coma". This is an optical defect caused by the lens. It appears as a slight blooming off one side of a point source of light. This would likely clear up if the lens were stopped down a bit. But this would require a longer exposure, which would lead to the stars streaking due to the earth’s rotation. There’s no free lunch.

Colour balance was set toAutosince I was working in RAW mode and could set it to whatever looked best in post-processing. But in any event moonlit photographs are usually most pleasing withDaylight White Balancesince after all the moon is simply illuminating the earth with reflected sunlight.

As discussed in detail in my article onmeteor showerphotography, the quickest way to determine the longest exposure that is possible for any given focal length lens, without the stars streaking, is to divide that focal length into 600. (This is the formula for 35mm. Larger formats are laxer, smaller formats more unforgiving). Since the 35mm focal length equivalent for the 14mm lens that I was using on the D60 is 22mm, I used a 30 second exposure (600/22=27 seconds. Close enough).

Of course if I was willing to accept the stars turning into trails I could have done a much longer exposure. But my goal was to experiment with trying to achieve a natural appearance that blends the best of daylight landscape photography with a "night look", with stars playing a dominant role.

All of this is by way of rehearsal for being able to do this type of shot at some point in the future when I find myself in a great location and the conditions are right. I now know what the D60 is capable of when doing nighttime moonlit landscapes, and I look forward to the images that may be possible.

"Luck" is preparedness in the face of opportunity.
Anon

Luminous Landscape Registration Request FormThis form will register you for theJanuary, 2009 Antarctic Photographic Expedition. By completing and submitting this form you agree to participate

Since its launch in June 1999 theLuminous Landscapehas grown to become one of the Net's most popular photography sites. Though by no means the busiest,