High-end Canon SLRs — film-based as well as digital — feature a mode calledDEP. (This includes the1V, Elan 7,EOS-3, 1Dand1Ds.See the section onA-DEPbelow for more on other Canon cameras). This is short forDepth of Field. It permits you to have the camera automatically select the hyperfocal distanceandappropriate aperture for that shot, so that the nearest and farthest objects in the scene are both in focus.

It used to be (back in the early Paleozoic — until about 1985) that lenses had depth of field scales. Setting the hyperfocal distance was simply a matter of focusing the lens so that the scale showed the farthest point and the nearest point desired to be within the scale of a given aperture, and then setting that aperture.

A Leica 35mm Summilux-M lens
focused at 12 feet,
showing depth of field from 6 ft to Infinity at f/11
This is whatalllenses used to look like.

The advent of autofocus, and the increased popularity of zooms over prime lenses has lead to the almost total demise of DOF scales on lenses. This makes the manual setting of hyperfocal distance impossible. But Canon has a solution — the DEP mode. Here’s how the manual says to use it.

— Set the camera to DEP mode

— Next, point the camera at the other extreme and once again half press the release.

The factory method works well, but is not without its problems. The primary of these is that the camera may well set an aperture that is so small that the shutter speed is unusable, especially if the camera is hand-held. Since most photographers trust the camera’s "automatic" modes this can lead to disappointing photographs.

Here’s a better way that I have found to be appropriate for doing landscape work, especially when the camera is tripod mounted.

— Set the camera to DEP mode

— Point at either the nearest or farthest object in the scene that you wish to be in focus and lightly press the shutter release.

— Next, point the camera at the other extreme and once again half press the release

These first three steps are the same as recommended by Canon. But here is where my approach differs from what Canon suggests.

— Turn off autofocus. Be careful not to touch the focus ring of the camera. Leave the focus where the camera has set it

— Manually set the shutter speed to the setting needed for the desired exposure. If this falls outside an appropriate range for the subject that you’re shooting, and you’re shooting with a digital camera, reset the ISO to a higher speed.

— Reframe the shot and take it

There are several advantages to this approach. The first is that you’re not under time pressure. The method suggested in the manual is for snapshots. It works, but you’ll be much better off working at a slower pace. If you leave the camera alone for too long in fully automatic DEP mode it will lose its settings. Secondly, the aperture that the camera sets is for aCircle of Confusionthat may not be appropriate for prints larger than about A4. If you stop down one additional stop you will find that the additional depth of field makes for a much crisper image.(If some of these concepts are unfamiliar to you you may wish to read my tutorial titledUnderstanding Depth of Field).

The photograph below was taken at a focal length of 135mm. I wanted the foreground rocks as well as the distant hoodoo to be in focus. I didn’t care if the mountainside in the background was a bit soft, but everything from the foreground to the hoodoo needed to be sharp. 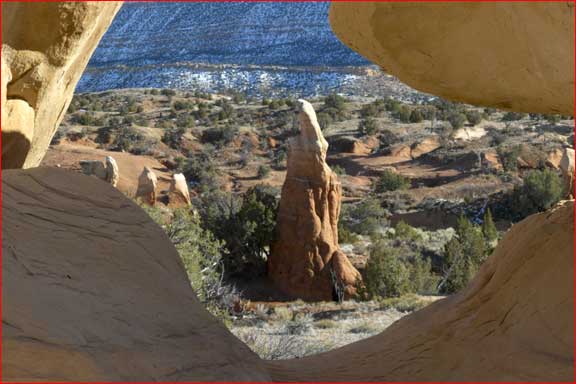 I selected a point in the lower left foreground as focus point #1 and the top of the hoodoo as point #2. (The order that you do these in doesn’t matter). This produced a hyperfocal setting that needed an aperture of f/22. After switching off autofocus and changing to manual exposure mode I set the lens to f/29 to provide a bit of extra depth of field in case I wanted to be able to make a large print. Since the camera was tripod mounted and there was nothing moving in the frame I was able to leave the ISO setting at 100 and let the shutter speed fall where it wanted to.

The next time you need lots of depth of field, giveDEPmode a try. Using the technique shown above can remove the guesswork from getting correct depth of field and hyperfocal settings with your Canon camera.

A-DEPis a simplified mode that measures the nearest and farthest items with a single half-press of the shutter release. Unless you are able to simultaneously position the focus points on the nearestandfurthest points desired (something that I find almost impossible to do), it doesn’t work very well, and it definitely can’t be used with the technique described above.

It would appear theA-DEPis an attempt by Canon to provide a depth of field mode easy enough for beginners to use, but regrettable by being so simple, it becomes almost useless. I’m particularly surprised to see theA-DEPmode on theD60and10D, cameras aimed at the more sophisticated user. Shame on Canon for this.