Digital image processing is, for me, about using superior tools to produce my photographic images; not to produce digital realities.  But occasionally the subject matter or the situation creates an exception to that rule.

There is an area just north of Toronto called the Caledon Hills.  In the fall of ’97 I was photographing the remarkable fall colours that were evident that year with my then new Rollei 6008 medium format camera.

Through what must have been an inadvertent bump against the tripod the best image of that morning’s shoots was slightly out of focus.  I rarely use any of the myriad of effects that image processing software is capable of.  But, because the transparency was unusable as a straight print I decided to see what I could do with it in PhotoShop. Surprisingly I found that PhotoShop’s Watercolour effect added a bit of additional blur, turning a failure into a dramatic image. 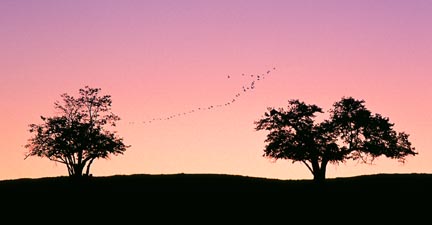 Occasionally creating an image can cause anguish — frequently in more ways than one.   In this case the first time was at the moment of taking the shot.  I was driving through the rural Ontario landscape looking for images about 20 minutes before sunrise.  I came upon these two trees silhouetted against the rosy pre-dawn sky.   I stopped the car, set up the tripod and camera and took a frame.  I glanced away for a few seconds and when I looked back I saw the flock of birds, which hadjustflown past the tree on the right.  I quickly panned the camera and took a shot of the birds.

I stood there cursing the gods of photography that I had been looking away when the birds flew exactlybetweenthe two trees.  A few months later I realized that I could easily merge the two images.  Was this cheating?   I had vowed when I started working with digital image processing that I wouldn’t do more with the computer than what I had been doing all these years with more traditional means.  Though I loved the image it caused me a lot of anguish.

Now, several years later, I feel sanguine about it.  The image isn’t a phony composite of something that never was.  The image really did exist.  I just happened to capture it with two frames a few seconds apart rather than with one. 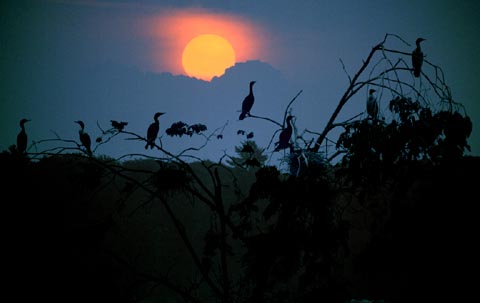 Not far from my summer house in Muskoka, Ontario, lies a small island heavily populated with birds — cormorants and sea-gulls mostly.  I had boated past it many times and because the best view was from the East, had visualized a shot with the branches and birds silhouetted against a powerful sunset. One hazy/foggy late-afternoon in June I went close to the island by boat and was able to shoot some striking silhouettes.  But the conditions didn’t seem right for the sun to break through the fog, so I didn’t bother to stick around for sunset.

Shortly afterward, upon returning to the dock, the fog began to dissipate and I shoot this striking sunset breaking through the lifting fog and clouds.  Like the shot of the flock of birds above, these images appeared within moments of each other.  The two scanned images were subsequently merged using PhotoShop because they allowed me to obtain the shot that I’d visualized.

Taken with a Canon EOS3 and Canon L 100~400mm IS zoom at 400mm for the birds. The sunset was photographed with the same lens and a Canon 2X extender, for an effective focal length of 800mm, on Provia 100.  The birds were shot hand-held at 1/125sec from a rocking boat (love that Image Stabilization technology), while the sunset was shot tripod mounted. 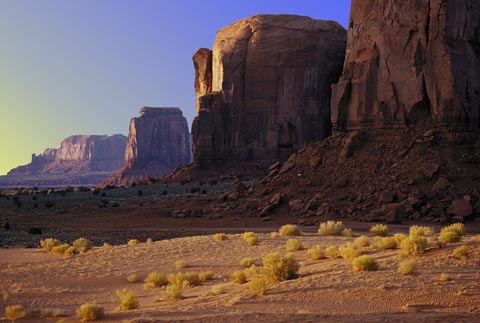 This photograph was taken in Monument Valley Arizona with a Canon EOS3 and 28~70mm f/2.8L Canon lens. It’s quite an interesting image other than that the sky was a boring white, as are so many skies. I used a simple technique to add a bit of blue to the sky and a hint of yellow from the setting sun. To see what the original looked like and to read about how this was accomplished, have look at the article entitled White Sky Blues. Also read Digital Manipulations, A Digital Printing Class,Gaussian Blur Overlays, and An Introduction to Digital Imaging for more on digital image processing techniques. If you’d like to read about my current digital image processing gear, look in Digital Processing. 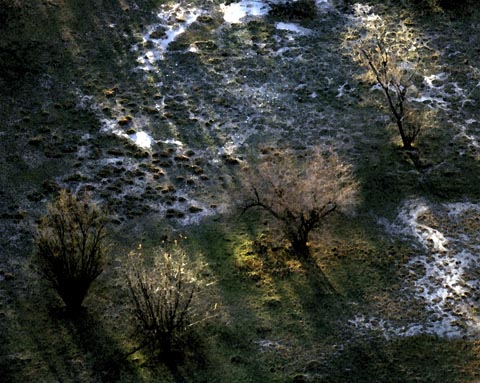 Standing on the south rim of Canyon De Chelley at sunrise, looking downward more than 1,000 feet to the valley floor, these trees and their long shadows captured my eye. Through a 400mm lens they took on a highly abstract quality, but the transparency when viewed on the lightbox was somehow disappointing. As with the image of the autumn trees at the top of the page I found that Photoshop’s “watercolor” effect created the mood most reminiscent of what I saw that morning. Again, these manipulated images are best seen in a large size by clicking on the picture above.

Thank you for your registration. We will be in touch shortly with details on how and where to make your intial payment and booking. If