How Much Storage Do You Need? 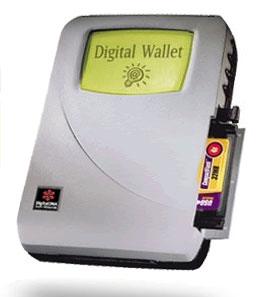 A 1GB Microdrive can hold almost 300 RAW mode images and many hundreds more in the JPG modes. If like me you shoot on location, sometimes for days at a time, even a couple of such large cards still aren’t going to be enough. On a week-long location shoot I can easily shoot 40-50 36 exposure rolls, or a couple of thousand frames. At 3MB a frame that’s some 6 Gigabytes. What to do?

One solution is to bring along a laptop computer. The large screen can be used to review the day’s shoot and the computer can also be used for email, navigation and other applications. But the downside is the added weight and bulk of a computer and as well the limited storage of even the largest hard disks. When I travel to a shoot it’s almost always by air and every pound and square inch of space counts. Also, most laptops when loaded up with a variety of applications and data rarely have more than a couple of Gigabytes free, if that.

The Digital Wallet fromMinds@Workis one solution. It is a stand-alone 6 Gigabyte hard disk about the size of a thick paperback novel. It can run on its built-in rechargeable battery or on AC. It can read directly from a CompactFlash card via a PC card adaptor. Back home it connects to a PC via a USB cable and appears there as just another disk drive. The direct purchase price is about USD $500.

In the field this means that you can download a 1GB Microdrive six times to the Digital Wallet before it in turn needs to be downloaded to a PC. Six gigabytes is about 2,000 frames from a Canon D30 in RAW mode, or the equivalent of some 55 rolls of 36-exposure film.

All Is Not Roses

TheDigital Walletdoesn’t seem to me to be ready for prime time. There are a number of flaws. First, from a design point of view it lacks the slick finish that we’ve become used to from consumer products. The LCD display is faint and the PC card door is stiff and awkward. It feels like it will break off at any time. The control push-buttons are unmarked and non-intuitive in operation.

The USB and AC power connectors are via a small module that plugs into the bottom of the unit. It’s easy to loose and seems to me to have been designed this way to shave a few millimeters off the size of the box. I’d have preferred a more integrated and robust design.

The firmware is flaky. In late October and early November 2000 I went through several firmware upgrades via emails fromMinds@Workcustomer support. These fixed several problems that I had (difficulty reading Microdrives, and flat batteries not recharging properly), but were an annoyance.

While theWalletinstalled fine on myIBM ThinkPadlaptop it absolutely refuses to install on my rock standardDell Dimension600Mz runningWindows 98. It crashed the Dell every time. After hours on the phone with their customer support they came to the conclusion that it simply wouldn’t work. Thanks!

My work-around is to attach theWalletvia USB to my laptop and then transfer the files via LAN to the Dell. It works, but is not the ideal solution. It just feels like a product that was shipped a bit too soon. I give it 2 stars.

For a comprehensive nuts-and-bolts review have a look at Phil Askey’s comments atDPReview.

After a lot of frustration with the Digital Wallet I’ve given up on it. My solution was to update my notebook computer to one that has a built-in CD-ROM burner (Acer). This way I can review my work at the end of each day, then burn a CD every 700MB or so. Also, a larger hard disk than in my old notebook means that I have some 6GB free, even with all of my applications loaded.