Those of us that spend many hours a day in front of our computers are very concerned about the displays that we use. There are two major types ‹ CRTs and LCDs, and each category has the good, the bad and the ugly.

I’ve been using anEizo Flexscan L66 Flat PanelLCD monitor since late ’99 and wouldn’t change back to a CRT for anything. I love the crisp image, the lack of heat and the lack of radiation. I also find it much easier on my eyes than any CRT that I’ve ever used.

The king of LCDs though is theApple Cinema Display. 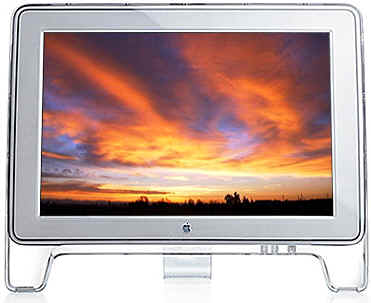 My good friend and prominent landscape photographerAlain Briothas recently purchased one and his brief review follows. As a PC user I’m almost ready to switch to a Mac G4 just so I can use one of these amazing displays!

In fact I did. Some months after the above was written I purchased a dual processor 533Mhz Mac G4 and Apple Cinema Display as a dedicated Photoshop system ‹ thanks in part to Alain’s review below and the monitor’s $1,000 drop in price in the Spring of 2000. You can read about that upgradehere.

I finally made a decision and purchased an Apple Cinema Display 22″ LCD. I received it yesterday. My initial reaction is “WOW!” I had my doubts about the color quality of the monitor and the purchase price (4k) and I initially placed it side by side with my previous Apple 17″ trinitron monitor running off the same computer (Mac G4 with 2 video cards). I lived with this setup for about an hour. While it was fun having two monitors and moving palettes and screens from one to the other the quality of the Applevision 17″ monitor couldn’t keep up with that of the Cinema display.

I also did side by side color comparisons using the same photograph and looking at it on both monitors simultaneously. Again, the Cinema display came out ahead. The colors are beautiful on the Cinema display and very accurate. They are perhaps a little less saturated than on the Trinitron, especially in the blues. I also found the Cinema display to be a little on the Green side something which was easily corrected by adjusting the color balance with Adobe’s Gamma control panel.

Again, the sharpness of the monitor comes out beautifully with photographs. Each detail of the image looks crisp and precise and it is a lot easier to see the exact effects of sharpening than on the Trinitron monitor. I now realize that I may have been oversharpening my photographs for years by trying to compensate for the relative blurr incurred by CRT monitors.

A plus for Mac users is the presence of an on/off button on the monitor. This is nice as the new G4 keyboards lack the presence of a power button and one has to power the system from the CPU itself not always an easy thing if it is located some distance from the monitor. There is also a brightness control on the monitor something that certain Apple products have been lacking lately (the iMac is one of them) forfeiting physical monitor controls for software-based controls.

The monitor came without a manual (uncommon for Apple) but with a high quality cleaning cloth (more useful in the long run). Through trial and error I discovered that pressing Control+Command+Monitor Power button caused the system to go to Sleep mode immediately. This is a nice feature since the shortest delay to go to sleep mode otherwise is 30 minutes. Since the new G4 keyboards do not offer a restart command option I was hoping that a command combination using the monitor power button would cause the system to restart after a crash the way it works on previous Macs through command+control+power. However, so far I have been unable to find such a combination if one is available at all.

As I said I had initial doubts about purchasing a Cinema display and one of them was delivery time. I had heard horror stories about backorders and delays. To guarantee timely delivery I ordered the display from Apple which initially let me know to expect shipment in 10 days. I actually received the monitor 5 days after placing my order online. I had to pay sales tax but FedEx shipping was free.

Certainly, the size of the monitor is a pleasure to behold. It allows one to look at two letter-size pages side-by-side. It is also wonderful with panoramic photographs which can now be displayed at a much larger size due to the panoramic size ratio of the monitor which makes its width twice its height (approximately). Surfing the web is also an interesting experience. While some web sites are locked into a fixed screen size other sites are able to take advantage of the full width of the monitor (such as excite.com). And…its also a wonderful display for DVD movies presented in letterbox format!

I have now been using the Apple Cinema display for nearly a year and since I continue to receive inquiries about this display I thought it was important to post an update to my original review.

First, I continue to abide by my original impressions. This display is fantastic, both in terms of quality, size and ease of use. I have had no problems whatsoever with it since day one.

Second, I truly believe that LCD monitors are the way of the future. They are sharper than CRT monitors, better for your health since they produce no radiation and they take up far less space on your desktop. Apple definitly supports this position since, as of summer 2001, they have discontinued their line of CRT monitors and now offer only LCD monitors. The only CRT remaining in Apple’s line up is the one provided with the iMac which has its display and CPU in a single enclosure. However I wouldn’t be surprised if “LCD iMacs” made their appearance in the near future.

This is not the first radical move on the part of Apple. A couple of years ago Apple abandoned floppy drives and offered all its computers with CD drives. Later Apple forfeited the use of SCSI connectors in favor of the then relatively uncommon USB connectors. Both of these moves, which were then seen as relatively radical, have proven to be timely. Floppy discs have become a thing of the past and USB has become the norm. I expect Apple’s latest decision to be just as timely and predict that in a couple of years only a minority of new computer users will still use CRT’s.

LCD monitors offer unique possibilities. A look athttp://www.panoramtech.comreveals a glimpse of what the future may hold. Panoram technologies offers an LCD monitor composed of three separate LCD screens joined together. Although this is currently a specialty item it is conceivable that multi-screen LCD monitors become available for the general public.

The quality of LCD monitors for critical color-correction work is often questioned. I personally do professional color work on my Apple Cinema Display without any problems whatsoever. The current issue of Electronic Publishing devotes two pages to the workflow used by Xweet, a prepress company with international clients. On one of the photographs which accompany this article four of their Apple G4 workstations are visible, each fitted with a calibrated print viewing booth for critical color comparison between printed image and image on screen. In such a critical environment one would expect to see high end CRT monitors since they supposedly better for critical color work. Well, all the monitors used by Xweet are Apple Cinema Displays.

Photography: An Eightfold Path Toward Self-Discovery

“And you? When will you begin that long journey into yourself?” – RUMI True photography, as a creative medium meant to express (and only rarely