Sounds about right, but it’s not the case.In fact, if the subject image size remains the same, then at any given aperture all lenses will give the same depth of field.

Because this is such a controversial statement, and because it initially flies in the face of common experience, I have created the following set of example images.

The set-up for it was as you see below. Camera on a tripod and two light stands holding test subjects‚ a gremlin, which is the main subject, and a hand puppet the other. A tall tower at infinity is the third. 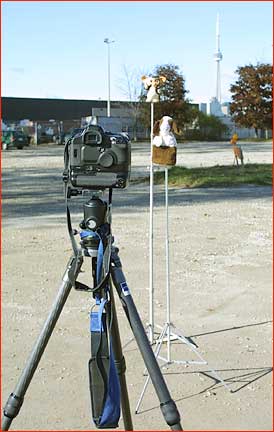 Each of the frames below was taken so thatthe gremlin doll is exactly the same size in each frame. I used the camera’s circular center focusing spot as a size reference. The gremlin doll just filled the circle. The hand puppet on the foreground light stand is about 3 feet in front of the gremlin, and the tower is a mile or more away.

Focal lengths from a 400mm telephoto down to 17mm ultra-wide were used. The lenses were all set at f/5.6 and the gremlin doll was the point of focus. As you can see there is not enough depth of field at this aperture to have either the hand puppet or the tower in focus. This is what I wanted. Incidentally, I have not bothered to spend too much time correcting and matching the frames for colour balance or levels. DOF is all I’m concerned about illustrating.

The Depth of Field is Essentially The Same

As you can see, the degree to which the tower and the hand puppet are out of focus is essentially identical in each frame regardless of focal length. To be sure, perspective changes dramatically,but not depth of field. 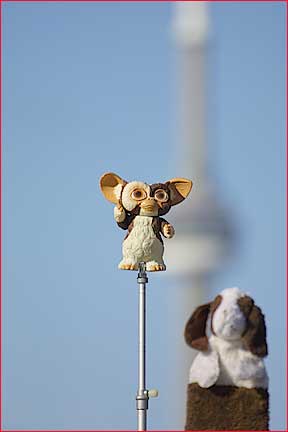 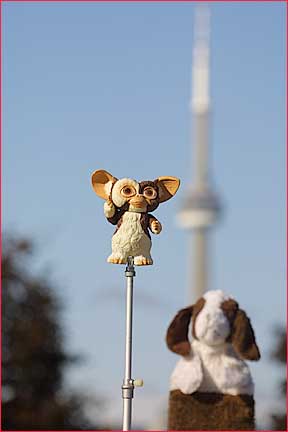 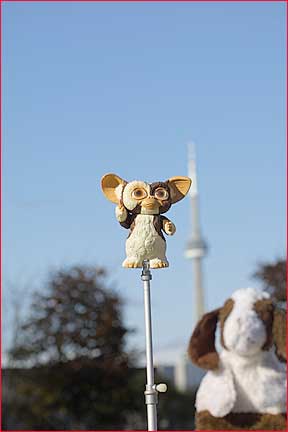 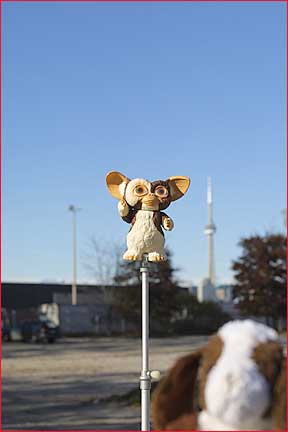 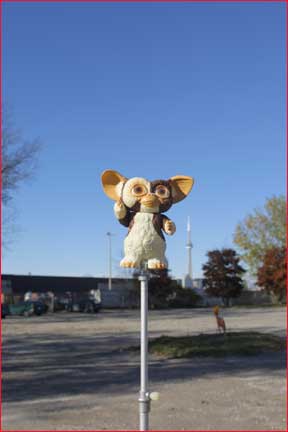 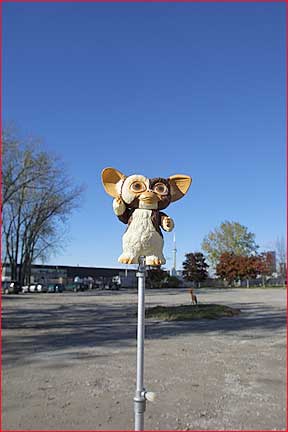 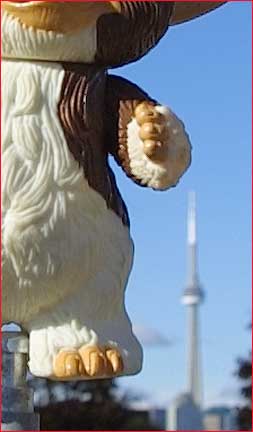 In the 28mm and 17mm frames the hand puppet is no longer visible, because to keep the gremlin doll the same size I had to get closer than 3 feet‚ inside the distance to the puppet. But, to show you what I can see in the original images I have blown up the 17mm frame so that you can more clearly see the distant tower.

Clearly, the degree of unsharpness is indeed the same as in all the other frames‚ even the one taken with the 400mm lens. Thus the depth of field is the same. If I had been able to set up this test so that the near subject (the hand puppet) was in the frame as well you would see that it too would show the same DOF as all the other frames.

There are those that will no doubt find fault with either my fundamental assertion or with this test. Yes, I know that there are some flaws with both, among them that I am not taking into account diffraction and other second order effects. But, from a practical point of view, what really counts to photographers working in the real world is what ends up on a print in front of them. The fine points of optical theory are one thing, prints hanging on the wall are another. My orientation as a photographer and as a teacher is toward the pragmatic.

If anyone is dissatisfied with this test or doesn’t believe it, I urge you to go out and do your own test. All it takes is several lenses, a roll of film, a few props and a parking lot. Enjoy.

Not long after this article was first published I received the following question. I’m reprinting it here because I believe that it provides the perfect situation where an understanding of this phenomena can be useful.

Hi Michael,While your depth of field article is wonderful, it brings up a possibly easy answer to a problem that is perplexing me. I shoot a lot of ski racing and other sports and I will be shooting a race next weekend. I generally shoot slalom with a 70-200 at f2.8, filling the frame with the skier. This forces me to get much closer to the action than I am comfortable with. For the upcoming race I’m renting a 300/2.8 so I can shoot from farther away. If I understand correctly, I should be able to shoot the 300 at f2.8 and get the same depth of field that I get at 200 assuming the subject fills the same amount of the frame. Is that correct?

Your solution will work exactly as you imagine. The 300mm lens will give you precisely the same depth of field as the zoom at 200mm, as long as you are shooting at the same aperture and the skier is the same size in the frame. This will allow you to back-up quite a bit. The only thing that would change would be perspective on anything in the background, but from my experience as a skier and from shooting ski races (a long time ago) this is usually just a snow covered hill, so it shouldn’t be an issue. Great example of how to take advantage of an understanding of this principle. Thanks!

Following the above exchange, my friend, Australian photographer Nick Rains, has contributed the following observation which will be of interest to sports photographers…

Hi MichaelIn response to the comments about skiing photography, there is one other advantage of using a longer lens: Assuming the subject is moving toward you, then the closing speed relative to the shooting distance is less with a big lens and the auto focus has a better chance of keeping the subject sharp. With a shorter lens the closing speed become relatively greater, the auto focus has to rotate the lens mechanism faster and it ends up losing focus. To put it another way; if you are 100m from the subject and the subject moves 10m in one second then the lens has to refocus through 10% of its "range" in one second. If you were 33m from the same moving subject then the lens has to focus at 3 times the speed to move through 33% of its range in 1 second. I must admit that the non-linear mechanics of lens focusing offset this aspect to a certain degree but the principle is sound. Possibly more importantly, the rate at which the subject increases in size within the frame is lower with the bigger lens and you get more time with the subject mostly filling the frame. I used to shoot a lot of sport and I know this to be true from experience.Nick