We live in ‘interesting times’. Not since colour film was introduced has so much controversy raged about photography. The Internet has allowed vast global discussions to ebb and flow like never before and whilst this is great in some respects, the downside is that there is a whole lot of misinformation floating around.

Problem:How to sift the simple facts and truths from the myths and rumours? 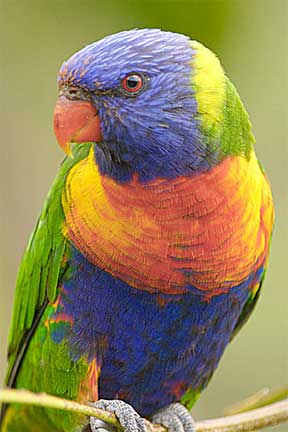 The ‘Focal Length Multiplier’ is one of the most easily misunderstood characteristics of the some of the new breeds of DSLR and so I would like to offer a brief look at this aspect of digital imaging and attempt to lay to rest some of the myths.

I own a Canon D60 and, like many other photographers, I was initially concerned about the ‘Focal Length Multiplier’ and the way it limits my use of wide lenses. So I had a hard look at this, and dug up some of my old photography text books for answers.

This is the crucial point – it’s a different format therefore the same lenses behave differently. In this case the format is smaller so the angle of view is also smaller. Therefore it behaves in similar, but not identical, fashion to a longer focal length lens.

Think in terms of Medium Format, say, 6×7 on a Mamiya RZ. This has special lenses built for it and the so called ‘standard’ lens is about 100mm in focal length. The lenses are different from 35mm ones because they have to project a bigger image circle onto the film plane to encompass a bigger film size, 54x66mm or thereabouts. The lens also has to spaced away from the film to allow the huge mirror to flip up and so has to be optically designed with this in mind.

The upshot of this is that different formats need different lenses. With DSLRs we are in fact using lenses specially designed for one sized format on another, smaller format – the lenses will therefore behave differently.

The smaller the format, the shorter the focal length needs to be for any given angle of view. On a a digital SLR like the Canon D60 a standard lens is about 31mm in focal length.

Here is the rub. We are attempting to use lenses designed for a bigger format. This is fine up to a point, after all there are plenty of 28mm lenses around to give us an equivalent standard lens. Problems arise when we want to go for a wider angle lens as there simply are none in the range of currently manufactured lenses. There are 14mm lenses around but any wider and they are all fisheye lenses.

There is a good reason for this – these lenses were designed for 35mm format cameras! 14mm is superwide in that format and very expensive to make as well. People complain that they have to spend many thousands of dollars to get a half decent wide lens. This is true, but the real reason is that it is hard to make a lens of such a short focal length that allows the mirror clearance of a normal 35mm body. The established design of ‘normal’ 35mm bodies has imposed a huge limitation optically and that is the crux of the issue.

Camera manufacturers have produced DSLRs that can utilize the existing lenses of photographers – this is a good thing. However there is a price to pay for this convenience and that it the range of angles of view of the lenses has shifted UP towards the telephoto end. That is purely a consequence of the SMALLER format – nothing else has changed.

All is not gloomy though. 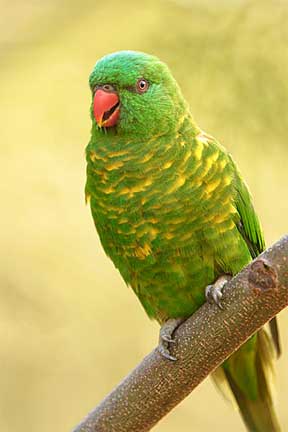 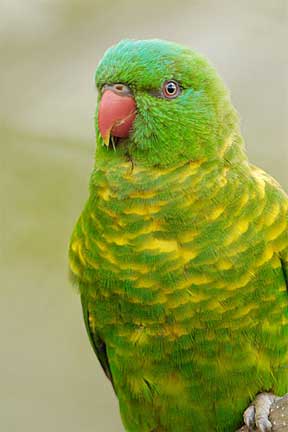 The above parrot pictures demonstrate that the subject fills the frame more on the D60
even though the same lens was used. This shows the apparent ‘magnification’ that people refer to.

Because of the smaller format of DSLRs, telephoto lenses have a narrower angle of view than the same lens on a 35mm camera – this is the so called ‘crop’. Angle of View is simply that viewing angle which fills the frame (of any format). This determined by the film format in relation to the focal length of the lens – not the focal length on its own. 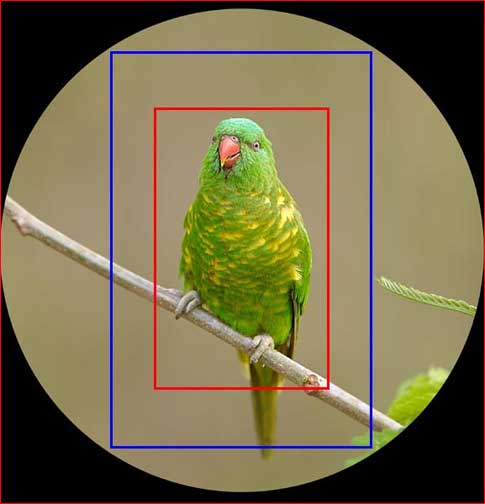 ‘Crop’ is a fairly good term – the imaging area is physically smaller. Less of the image circle projected by the lens is used, therefore it is a crop. The image remains the same size at the film plane for a given lens and subject distance – it is in no way magnified. It does, however, take up a larger proportion of the (smaller) frame and so it is easy to see why some people call it a magnifying effect. This is also why a tele lens appears so much more powerful – the field or angle of view has been reduced. This is great for nature and sports photographers as the net result is more real pull than before with no trade off of maximum F Stop loss.

As an example: on a 35mm camera a macro lens focuses a 24mm long insect onto the film at same size – this is known as 1:1 ratio, or Life Size. 2.4cm on the film is about 2/3 of the frame in length so it will print to 2/3 of whatever (full frame) print size is made. On a DSLR with the same lens and at the same subject distance, the image at the film plane is still 2.4cm long at 1:1 or Life Size. However, 2.4 cm is about full frame in size and the subject will now occupy all the frame. For a given print size the subject will appear bigger in the frame. Thus it appears magnified compared to a 35mm camera.

(Note that I have made no mention of the resolution of the film or imaging chip. This is unimportant as long as the chip can resolve similar detail to the same sized area of film. Many long arguments have raged about this but most boil down to apples being compared to oranges or the combatants actually saying the same thing from different perspectives and not realizing it!)

One other subtle benefit is the greater depth of field. To frame a head and shoulders portrait for example, a DSLR use will have to stand further away than a 35mm user with the exact same focal length lens. Subject distance determines DOF, for any given focal length and Circle of Confusion so it follows that the DOF will be greater by roughly 50%.

All of the above is worked out from various classic texts, most importantly:

From Ansel Adams in his classic book “The Camera” (New York Graphic Society 1980).

This is why the image on a DSLR is not actually magnified in any way by the 1.6x ‘multiplier’.

"All lenses of the same focal length have the same angle of view for any given format."

"Light from a subject point at infinity produces parallel rays which are refracted by the lens to focus at a single point. The distance from the lens to this point is the focal length of the lens."

The focal length is fixed and independent of the ‘film’ format.

"Depth of Field – the distance between the nearest and farthest parts of the subject which can be brought into acceptable focus."

This is crucial. Depth of Field is an illusion based on minimum sized Circles of Confusion and is related to the enlargement factor of the final print and the distance of the subject in multiples of the focal length of the lens being used. In other words, short focal length lenses have greatest depth of field at a given subject distance.

The DSLR has greater depth of field when the subject is framed the same as on a full frame SLR as the angle of view of the lens is less and the subject distance must therefore be greater.

The Canon D60, Nikon D100, Fuji S2, etc, have a smaller sensor than 35mm film but uses the same lens range. The smaller format means the lenses all have a narrower angle of view than on 35mm film cameras. This is often misleadingly called the Focal Length Multiplier.

The focal length remains the exact same but the angle of view is reduced to the same as that of a lens of 1.5 or 1.6 times greater focal length on a 35mm format camera.

The Depth of Field of lenses on DSLRs is increased when the subject is framed the same as a 35mm format camera with the same lens.

The decreased angle of view of the lens means that the design limits of existing 35mm format lenses do not allow the easy design of a short focal length lens with sufficient retrofocus to allow room for the SLR mirror.

The smaller format uses less of the normal projected image circle of a particular lens and thus edge distortions are ‘cropped’ out. See this site’s review of the Canon 16-35mm for proof of this.

And finally, a DSLR with a full frame sensor such as the Canon EOS 1Ds or Kodak DCS 14n has none of the above characteristics and the lenses behave exactly like they are designed to.