From Landscape to Street

In landscape, nature and wildlife photography explaining why some photographs "work", or are better than others, is not that difficult. Issues of formal composition, structure, balance, and so forth can be explored. I critique submissions by readers every month in mySubmissions Contest, and after reading it for a while you’ll see the topics that arise most. In other words, landscape photography can usually be learned through study and practice.

Butstreet photographyis another matter. The rules (to the extent that there are any), are different. Street photography is mainly about photographing people in a specific context. Why should it be difficult?

I have written extensively on the subject ofStreet Photography, and there is an major segment on the subject inIssue #4 of The Video Journal. If this subject interests you I believe that you’ll find that the article, and the video interview with leading street photographerJohn Brownlow,contain information on this subject not found elsewhere.

What is it that separates the mundane from the engaging? Why do some images "speak to us", while others are nothing more than a simple record of a certain time and place? There is no one answer. But I believe that part of the answer is that photographs that hold our attention‚ ones that demand more than a cursory glance‚ almost always have some element of mystery about them. They make us curious about what’s going one. They ask questions that don’t have apparent answers. In other words,they are enigmatic.

In late August 2002 I returned to the CNE (Canadian National Exhibition), a large Fall Fair with aMidway. I shot there twice in one week, each time for a couple of hours. The first afternoon I used theCanon D60and a then brand-newCanon 16-35mm f/2.8lens. I restricted myself to this one lens because I was in the process of testing and becoming familiar with it, and also because I enjoyed the discipline.

On the second day I shot with aLeica M7and two lenses, the35mm f/1.4 Summiluxand the50mm f/1.0 Noctilux. On this occasion I shot with transparency film, and after dark with ISO 400 colour negative. This shoot, and a brief review of theM7and theNoctiluxwill appear in a future version ofThe Video Journal.

In reviewing my successful prints from these two sessions I realized that each of the six selected images had to some extent that same enigmatic quality. By exploring why these photographs "work" I hope to shed some light on this elusive aspect of street shooting.

As always on this site, framed images are linked to larger versions. 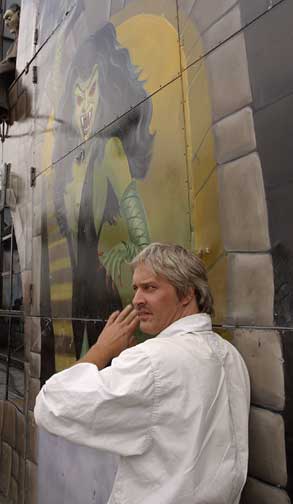 This fun-house wall and its female vampire illustration caught my attention. There was a man standing beside it, not looking in any way special, but I walked closer, and as I did he turned toward me. I took this frame because I saw an interesting juxtaposition between the gargoyle in the upper left of the frame, the illustration’s face, and the man’s expression and body language.

Without this background information, when you look at it, you wonder‚ where is this, who is this man and what is he doing? Then you look closely and you see his expression, and your eye works its way up to the woman’s face and then that of the gargoyle. Enigmatic. 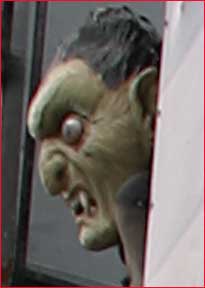 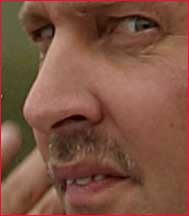 An additional reason why this photograph holds ones attention is that because of the tight cropping there is no extraneous information. The eye is forced to move back and forth between the elements contained within the image, with nothing to distract. 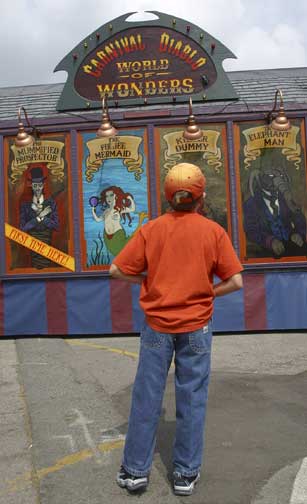 A classic moment. A small boy standing enthralled by the potential wonders of a carnival freak show. The tilt wasn’t intentional; I was working quickly. But when I went to straighten it out in printing I realized that the boy was tilted as well. Leaving the building tilted one way and the boy the other creates a dynamic tension.

I played with converting this image to B&W, but it didn’t work. There’s not enough graphic strength to it. But the shocking-red T-shirt and colourful cap act as a magnet to the eye, and this of course would be lost in B&W.

What is the boy thinking? Is he repulsed, attracted, or both? That’s part of the enigma. 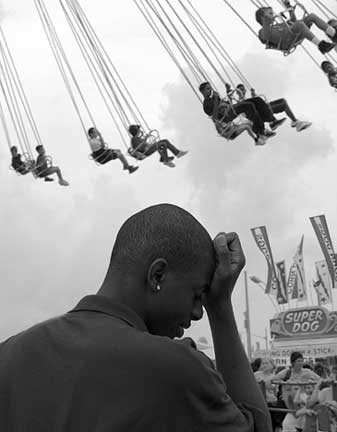 This image definitely wanted to be in B&W. If running a Midway ride for 12 hours a day isn’tExcedrin Headache #12, I don’t know what is. The shiny earring draws ones eye because it floats in a large area of dark skin and a dark shirt. Theflyersoverhead seem to part of this young man’s bad day, and the people waiting in line complete the gestalt. Maybe there isn’t an enigma in this frame after all. Just a headache. 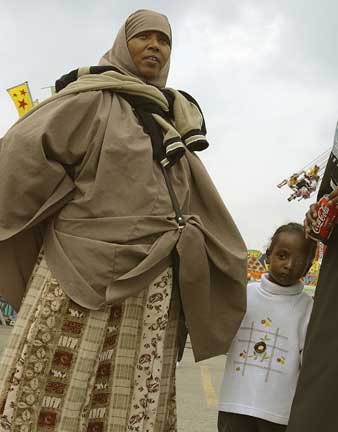 My usual camera for street shooting is anM-Series Leica. Has been for most of 30 years. But this particular shot couldn’t have been taken with anything other than an autofocus camera.

I found this woman in her traditional garb to be fascinating, but her body language, and that of her companion, was such that I know that she would turn away if I tried to photograph her. So I did something that I’ve rarely done‚ holding the camera with its wide-angle lens dangling down by my side I stood alongside her and took this frame from waist level without looking through the viewfinder. The combination of low angle, wide lens (16mm ; effectively 26mm on the D60) and autofocus created a unique perspective.

The "how" of the shot aside, I particularly like the tilted angle and the extreme cropping. The "flyer" in the right of frame, the Coke can, the flag, and the yellow line on the cement accentuate the "V" shape that dominates the composition. This combined with the strength of her demeanor, and the staring gaze of the child, all create a compelling and somewhat enigmatic image composed of disparate but linked components. 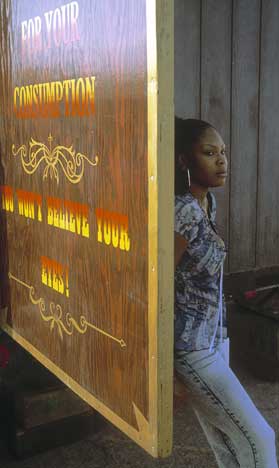 Irony sometimes takes the form of unintentional humour. The juxtaposition of this attractive young woman and sign is funny. (This is the same building as theDiablo Carnival of Wondersseen higher on this page.) A candid portrait like this would be interesting by itself, but part of the intrigue here lies in the fact that she was unaware of the irony associated with where she was standing. 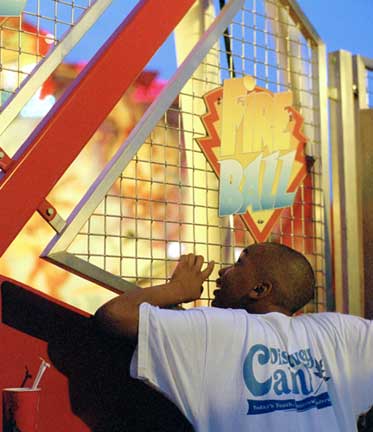 Fairgrounds are mainly for kids, and this young man’s expression was one of total absorption and excitement. The fact that he is so animated and has the sign which says‚Fire Ball ‚ pointing right at the top of his head, has a mildly ironic element.

Though the sky appears blue, it was almost night and the Midway was quite dark when this was shot. All of the illumination came from incandescent lights.Superia X-TRA 400is an excellent film for shooting in mixed light situations like this, and when combined with an f/1.4 lens can produce decent‚ even vibrant‚ colour in just about any lighting situation short of total darkness.

If you have found this type of analysis of interest you might also want to read my essay titledCritiquing Ones Own Work.

Suggestions for the Next 1 Series Canon

As this is being written the biannualPhotokinatrade show in Cologne, Germany is just 9 months away (September, 2006). By the time of Photokina it will