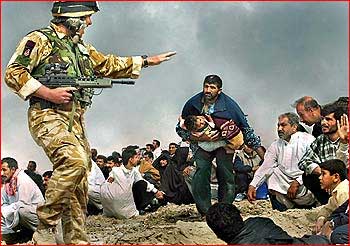 The photograph above is a composite created by ex-LA TimesphotographerBrian Walski. He was dismissed by the newspaper when they discovered that the above photo, which appeared on the front page of their March 31st issue, resulted from the combination of two separate photographs taken seconds apart. I suggest that you read theLA Times’ editorial commenton this issue, view the two original frames, and then return here.

Naturally this issue is of interest to photographers. It’s been around for more than a decade and was discussedad nauseamwhenNational Geographicmoved a pyramid on the cover of one of their issues "for artistic reasons". In that instance the argument was made by some that there was "no harm, no foul". But in this instance anews photographwas altered, raising all kinds of concerns.

Naturally this isn’t an issue of digital vs chemical photography. People have been altering and faking photographs since its invention more than 150 years ago. It’s somewhat more controversial now though because of the ease with which it can be done with digital means.

I can’t help but comment on this tragic mistake by the LA Times in publishing the doctored photograph from the Iraqi war. As in the Art Wolfe debacle, the problem is not the manipulation that bothers me, but the integrity of the individual photographer. He’s guilty of the most fundamental and grievous of all photojournalistic rules: He simply didn’t get the shot.

The Editor who fired the photographer was absolutely correct in firing him. The photographer submitted a ‘doctored’ ‘better’ photograph in clear
contravention of paper policy – a policy that must be maintained to support honesty. If I was that editor, I would quietly re-hire the photographer today.

I agree with the newspaper’s documented policy and the consequences for the photographer. Readers or viewers of any journalistic media whether newspaper, radio, television, Internet) must have confidence in the basic veracity of what is being presented to them. Arguing that a change was made for compositional reasons is simply a red herring to the real issue: truth in reporting. This is no different than the several unfortunate cases a couple years ago of well known journalists writing stories that were based upon composite characters, rather than the identified "individual" that the story was purportedly about.

I would also disagree with Chris Sanderson’s comment about quietly re-hiring the photographer. This would make a mockery of the newspaper’s dismissal of time in the first place, and the sound reasons for it that were stated in their editorial. The photographer’s quiet re-hiring would undoubtedly soon become public knowledge, and now the entire newspaper would be (rightly) discredited.

This issue is entirely separate from altering photographs for artistic reasons. In that case, the viewer (hopefully) understands the difference between art and journalism. Such manipulated photographs are often published in newspapers, but should always be clearly labelled as such.

I am not against "artistic license" for non-documentary photography or Art. But I also believe that some photographs are presumed to show what actually happened. Any publication that has a policy of not allowing alteration needs to police that policy. I think the right thing happen in this situation (whether they hire him back or not).

However, we all know that choice of white balance, color space, sharpening, contrast, color, lens movements, perspective, and more can affect the emotional impact of our photographs even if we don’t actually move pixels around. So each instance will be a subjective call on the part of whoever are the "photo altering police" in that situation.

Photo-journalism must maintain high standards of integrity. We all want to believe what we see in our new photos (and for that mater in nature photography if it is supposed to represent some animal or plant behavior.) In this particular case I think it is clear that the doctored photo delivers the desired and true message. However, who do you want to put in charge of drawing that line? Once altered photos are allowed in reputable news sources then people will stop trusting them, and for good reason.

What punishment should be applied when the alteration is done by a staff photographer? I don’t know, but whatever it is it must stand and not be rescinded as suggested by Chris Sanderson. Perhaps news sources will start requiring proof of authenticity as provided by the Canon 1Ds.

I think the firing of the news photographer was the correct decision. The integrity of the media should be sacrosanct and a composite photo not so identified leaves in question the validity of the entire new gathering process. News stories are often biased enough as it is. To leave a question in the mind of a reader as to the veracity of a news photo is to invite disaster when the media’s honesty is in jeopardy in the first place. If a composite is to be used, it should be identified as such.

He should have been fired for 2 reasons, the first of which was that it was a violation of stated policy. The second is that he altered a photo without good results. I dont see the benefit in what he did, in fact the combined photo looks worse than either of the originals because of a shift in the perspective. He wasted his time and eventually his job. The issue of journalistic integrity is a thorny one, and tough to comment on since one does not find much evidence of it modern media. He lost his job for practical reasons rather than philosophical ones.

I am sorry but I believe I may disagree here.

The key, repetitive word here in many of these postings is integrity. I believe this is a word which is a honorable description for anything that represents an action, view, behavior or belief that is consistent with it originator or author who is consistent with societal norms. (For example, you would not consider a mass murderer someone with integrity who only kills blue eyed people, if he/she defers from killing brown eyed-people.) …. (editied for length)

Personally, I like the merged photo better than the two individual photos because of the composition. Also, I do not think it did change the editorial message of the image one bit. However, if the photo had the solider pointed to the head of a child and it was then tampered to be seen as a photo a gun point at the head of a grizzly fighter, I would have definite problems with that type of manipulation. Everything has context and must be viewed in its relative state, especially when one views images with their emotional messages. When you combine subject alteration without examining the veracity resulting message, you may be firing someone on a standard that has many vague underpinnings.

As a journalist, I can only applaud the LA Times for following through on its stated policy of not accepting altered photographs for publication. As someone already wrote, it’s about truth in reporting. There’s nothing more important than the trust a newspaper must maintain with its readers. I’m sad, however, that apparently the pressures of photojournalism are such that even an established staff photographer feels he must violate the newspaper’s policy and one of journalism’s core ethical foundations in order to stay competitive. I’m also disturbed by the fact that LA Times readers noticed the fake after its photo editors had missed it. This is even harder to swallow knowing it was a front page picture.

Much ado about nothing, in my opinion. Oh, I don’t mean to disregard the LA Times very public airing of their high ethical standards. Ain’t it grand. Now I know I really can trust them. C’mon folks, yes, as someone wrote, the.. ‘integrity of the media should be sacrosanct ‘. Yeah, it should be, but let’s not pretend we think it is. As to the actual insult to integrity, let’s think for a minute. If I alter 7 pixels in the sky of that shot, from blue to a lighter blue, should I be fired? What about if I took a bird out of the background sky, barely recognizable as a bird. What if I adjust the contrast of the scene, or the color balance. A little bit of thinking along these lines may lead you to some concepts, touched on by others here, about whether the ‘alteration’ has changed the ‘truth’ of the photo, has altered it’s message about the reality being depicted, and so on. So you’d have to think about the altered photo, look at it, and make a decision. Not mindlessly apply a ‘policy’. That’s what big city newspaper editors are paid good money to do, think about things, and figure out what’s right.

My 2 cents about that photo, without having read the story it is illustrating, it doesn’t change anything of significance – no harm, no foul. I’d be interested in someone sharing what they think got changed by the edits the photographer made – that is, changed about the reality of the moment.

Thanks to everyone for your comments. I think that the jury has returned its verdict.

The winner of this contest was Shawn Lingo of Eugene, Oregon.Shawn will be coming to Ontario for his workshop in October. Congratulations Shaen. Algonquin Sunrise.