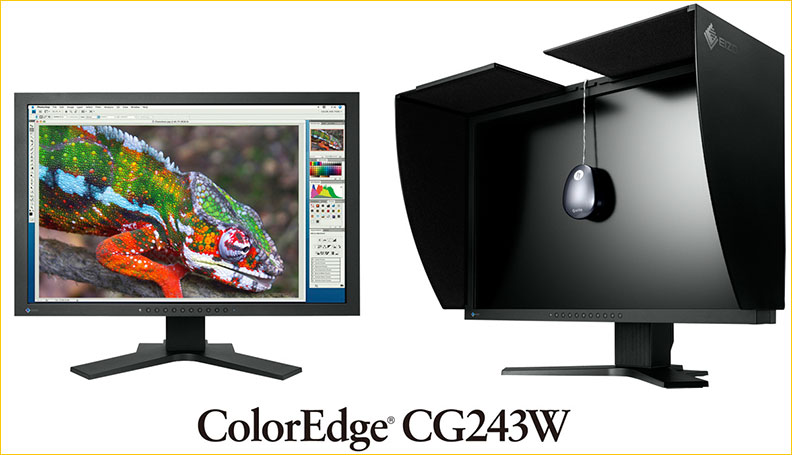 Ahhhhhhhh, the “bleeding edge” of technology! It is called so because as an early adapter, one is likely to get “bloody” in the frustration of trying to get the darn stuff to work properly—and this is how I have spent my last year on the issue of implementing one of the first 10-bit per color plane monitors to the market. The good news is that at least one 10-bit LCD graphics monitor finally works as intended, and it is now a desirable option for the advanced photographer.

After a shipping accident destroyed my Sony Artisan CRT monitor in August 2009, I sought an LCD graphics monitor with similar performance capabilities to replace it. For those who know the performance capability of the Sony Artisan, any replacement for its function would be a tall order. Fortunately, Eizo Nanao had just released its newColorEdge CG 243wmonitor the month after my loss—one of the first true 10-bit per color plane monitors. With its exact factory calibration and screen equalization, full Adobe RGB color space, 16-bit computation, 12-bit 3D LUT look, and 10-bit data path via DisplayPort connection, the CG 243w held great promise for the ultimate function in graphic monitor performance.

Thus began my year-long saga and quest for true 10-bit performance in the digital domain and the bleeding edge lesson learned. Upon the arrival of the monitor, the first task was to interconnect my Apple Mac Pro with the ATI Radeon HD 4870 graphics card to the CG 243w. The 4870 graphics card is one of the few graphics cards on the market capable of true 10-bit interface. With OpenGL enabled within PhotoShop, this graphics card provides full support of 10-bit data paths to the monitor, but via DisplayPort only. DVI connectors are limited by definition to 8–bits per color plane for the data paths, while DisplayPort can go to 10-bits (and as high as 16-bits).

The LCD monitor has a DisplayPort connector on it, while the 4870 card for Mac has a Mini-DisplayPort connector. Fortunately, an aftermarket cable manufacturer had just started to ship an adapter cable suitable for the interface task just after the arrival of my new monitor. This was a fill-in aftermarket item developed by a third party, all because Apple was remiss in creating the Mini-DisplayPort standard without offering an adapter porting to conventional DisplayPort, the existing industry standard. Shame on Apple.

Upon the cable’s arrival, all was not well. With the Mac Pro and 4870 card connected to the CG 243w, operation fell apart in what we now refer to as the famous “mouse jump” effect. In essence, the mouse would no longer work properly when the monitor and graphics card were interconnected via DisplayPort, while working fine, but with restriction to 8-bits per color plane in DVI mode. The mouse would jump from spot-to-spot around the screen, instead of smoothly moving across it when the monitor was interconnected from Mini-DisplayPort to DisplayPort. In essence, the graphics card brought down the function of the entire USB bus, and likely the computer, for unknown reasons.

The immediate assumption was that the mouse jump issue had to do with the aftermarket cable. But after months of effort by others and myself, finally backed up by research at Eizo, this proved not to be the case. It took us all months of effort and a box of cables to come to this conclusion—lost time and great aggravation for all.

By late 2009, the user support boards at Apple had a pile of complaints registered by high-end graphics users of mouse jump when connecting via Mini-DisplayPort to DisplayPort to either the CG 243w or other 10-bit monitors, such as the HP DreamColor, when using the 4870 graphics card. Since there were no other supported 10-bit graphics cards available for the Mac Pro, we were all boxed into making what worked for us. I, along with a number of other users, worked with Apple’s support and engineering teams to electronically capture the issue for their analysis. By the end of the year, Apple engineering had classified it as a “known issue,” but would not elaborate further. With each updated operating system released by Apple, we all had hoped for resolution of the issue, but none was made.

By the beginning of 2010, Eizo’s engineering department was formally working through the problem. As a Japanese company, the work was methodical and took considerable time. But what its work revealed was that it was not a cable problem, nor a specific problem with the graphics card or Mac operating system, but rather an incompatibility in the firmware of the monitor itself. I am sure that this was a tough realization for Eizo, but great companies face up to their problems, not shy away from them. In fairness, a draft of the Mini-DisplayPort standard had not been released until 2010, so any of the minute but critical timing issues for compatibility would not have been available to Eizo prior to this point.

Flash forward to mid-June of this year, and a firmware patch was issued by Eizo for the CG 243w! I am now fully operational at 10-bits per color plane.

So what is it like using a 10-bits per color plane LCD monitor, and how does it affect one’s ability to make images?

The most obvious difference shows up during calibration, where it can be readily seen that the Delta-D values for the calibration of the monitor are much more on target, not tending to “skip” in the vicinity of a calibration point.

But the most obvious user observation would be that the lower zones of the image are depicted far more accurately in both color and gradation. While the human eye is capable of resolving around two hundred just noticeable differences of gradation based on human factors perception, those values have to be accurately placed along a non-linear curve to be perceived properly. On a practical basis, 256 steps of gradation just does not seem to do nearly as well as 1,024.

I think it will take some time before the CG 243w is optimized for my work by creating a custom calibration standard that fully takes advantage of its 10-bit capability. I would imagine seeing greater visibility of the improvements as the contrast is raised from my current use of 300 to 1, to a higher value. This is a new technology in many regards, and it holds great promise. But it will take all of us end-users some time to learn how to use it to advantage towards the creation of our images.

As with every aspect of bleeding edge technology, it has been a long and painful head-bashing year to get my CG 243w to operational status. What I can say at the end point is that the Eizo CG 243w is a jewel of a monitor, and Eizo did a superb job on its design and ultimately resolved the mouse jump problem. I would highly recommend this monitor to those in search of a monitor that really delivers onscreen all the nuances of the image. If you can’t see your image properly on the display, you can’t make the image truly come to life. It’s just that simple. The CG 243w opens up the door to a new world of image fidelity that allows artists to fully visualize the exacting nature of their work.

I would like to publicly thank David Waletki, Vice President of Sales, North America, Eizo Nanao, for his diligence in resolving the issue along with the international team of engineering staff at Eizo. It is an act of courage to believe in the legitimacy of your customer’s problems. And I would also like to thank Rick Hatmaker, head of Technical Sale at Chromix, for his superb customer support throughout the year.

Publishers Note . . .  Please check with the manufacturer about the specs of any monitor being purchased.  This articles is and older article and what is claimed by the author may not be totally accurate.

FTC Disclosure:
As the author, I purchased my Eizo Nano CG 243w at full retail price, and all service was performed under normal warranty by Eizo.
No special treatment was given to the author, other then Eizo’s genuine interest in solving a difficult problem.