No — notwithstanding the title — this has nothing to do with fishing or hunting. But, rather, it is about two different styles of doing landscape photography.On this page I show examples of the two styles which exists in my own work, and describe an example of each — interestingly — taken just one day apart.

Thefishermanstyle photographer takes a slow and contemplative approach. He waits for the light to be just right. He may even wait and return to a specific spot that has been noted as having potential at a different time of year. Most large format landscape photographers fall into this category, though of course it’s a matter of temperament as much as of equipment. Here is the story of the making of one such photograph.

We were on a 5 day photographic trip in Southern Utah. My companions on this shoot wereSteve Kossack, southwestern U.S. photographic guide, andAlain Briot,the well known large format landscape photographer.Chris Sanderson, director ofThe Video Journal, was the fourth member of the group and was filming our expedition for an upcoming issue ofThe Journal.

It was mid-afternoon and we were driving down theNotomroad, just east ofCapital Reef National Park. This road runs down theWaterpocket Fold, a unique geologic formation. The road ends at theBullfrog MarinaonLake Powell. About 10 miles south of Hwy 24, just before the paved section ends, we encountered a very dramatic hoodoo right beside the road. It stood about 150 feet high, and the gap between the pillars near the base must have been at least 10 feet wide. 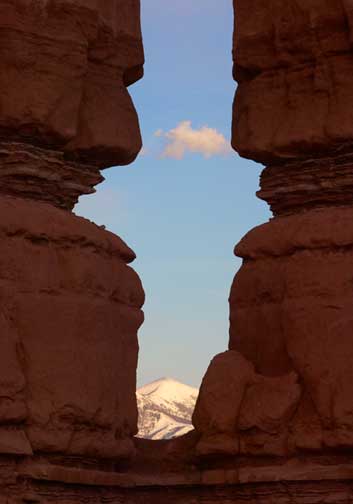 It was about 2:30pm in the afternoon. The light was harsh, the sky was flat and colourless and there were no clouds. But I loved the shape of the space between the pillars, and after walking around a bit found that by standing in a certain position a distant peak (one of theHenry Mountains) could be placed right between them. A fascinating compositon, but at that moment graced with lousy light.

Looking at the position of the sun, and calculating where it would be at sunset, I saw that the pillars would be in shadow while the mountain peak would still be illuminated. All that would be needed were some clouds to add interest to the sky. Though the sky was clear I knew that in the southwestern U.S. clouds often build toward sunset. Maybe we’d get lucky.

I decided that the opportunity was so good that we should return toward sunset and see if the light worked out the way I thought it might, and whether some clouds would grace us with their presence. By 5:00 PM, about 90 minutes before sunset, we returned and set up our tripods to wait to see what developed. The light started to get warm, turning the snow on the peak a lovely pink, but the few clouds in the sky refused to cooperate and enter the gap.

I paced back and forth in frustration, and just as I was about to give up hope Steve called to me that a small cloud had drifted just between the pillars. I ran over to the camera and took a frame. The cloud was there just for a few moments, but it was what I had been waiting for. Without it the shot wouldn’t have worked. With it, it was a portfolio-grade image. The fisherman’s patient approach is what it took to make this fascinating photograph possible.

This is my usual style. I’m constantly chasing light. AsEdward Westonis reputed to have said, "If it’s not happening here, it must be happening somewhere else. Let’s go!" It’s one of the reasons that I don’t work with large format. I drive or hike, and when I see something that works — where the subject and light are coming together — I want to capture it as quickly as possible. Great light is fleeting.

This photograph was taken just to the northeast of the tunnel inZion National Park, a couple of miles beforeCheckerboard Mesa.We had arrived at the Park during the afternoon before, but heavy clouds rolled in and it started to snow. We drove the road north of the tunnel and were excited about the fresh snow on red-rock, but it then started to snow heavily, and as the light faded we retired to our motel inSpringdalesomewhat dejected.

We awoke before dawn and were excited to see that the snow had ended and that the sky was full of stars. We drove up through the tunnel and came out onto a scene that would be any landscape photographer’s dream. 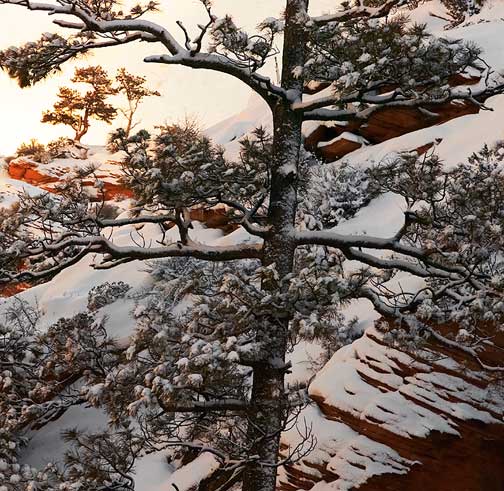 There had been a dusting of a couple of inches of powder snow overnight. The wind was calm, and the sun was just rising behind the hills to the east. As it brightened some thin clouds started to whip around the hill tops, softening the dawn light and putting a fine scrim over distant objects. I was like a kid in a candy store. Magnificent subject matter and fantastic light.

We parked at a pull-out and spent the next hour walking up and down a 100 yard stretch of twisty mountain road shooting dozens of frames of various scenes. I felt in a heightened state of awareness as I quickly moved from one subject to the other as the rapidly evolving light altered the scene from moment to moment. This particular photograph existed for about 20 seconds as the light kissed the edges of the red rock, making them glow. It was the hunter’s staking of the game that produced this and some of the other striking images from this unique morning. No time for contemplation or planning — just the thrill of the hunt.No landscapes were injured in the making of this photograph 🙂

FacebookTweet Understanding Polarizers Care, Feeding & Proper Use There are few more important things that a nature photographer can do to improve his or her