A Flair for Flare

Flare takes two forms. The first is best described as "non-image forming light" that affects the photograph. We all know what this does. It degrades the contrast of the image by increasing the exposure without adding any image content. Every photographer knows that the way to avoid it is to shield the front of the lens from the sun (when doing outdoor work) or from any artificial light appearing directly in the shot when working indoors.

The second type of flare is caused when non-image forming light enters the lens in such a way as to reflect off the internal surfaces of the lens, causing the elements themselves to become part of the image. The photograph below is a wonderful example of this. In fact, without the flare it would have been ho-hum at best. With it, it’s quite an eye catcher. 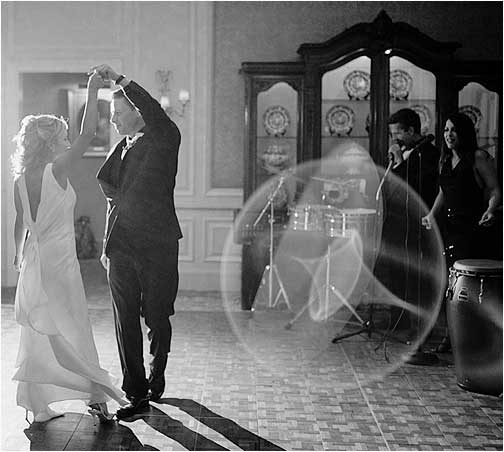 I attended a family wedding recently. There was an official photographer doing her thing, so I was merely doing some B&W available-light candids of family and friends. Drink in one hand, Leica in the other.

When the bride and groom went to the dance floor to have the first dance I took this frame. By remarkable coincidence the wedding photographer, who was using flash and working in colour, took her exposure atexactlythe same instant as I took mine. (What coordination!). She and her flash were just outside the frame to the left.

When I first looked at this neg I thought that it showed a giant soap bubble floating over the dance floor. It was only after I scanned the negative that I realized what I was seeing. This is the most remarkable example of internal lens reflection that I’ve ever seen. Large multi-element zooms will sometimes do this, but I’m quite surprised to see it from a fixed focal length lens with 9 elements.

Just thought you might enjoy seeing it. End of story.