For the past year or so widely-published Australian photographerNick Rainsand I have been puzzling over a curious phenomena that we have both regularly seen when using Fuji transparency film — black specks on some film when scanned and viewed at high magnification. Correspondence with other photographers around the world has shown that this is being widely seen, which eliminated any specific lab or chemistry type as the source of the problem. Clearly it was the film.

After some effective sleuthing, and correspondence withFuji Film, Nick has uncovered the source of the problem. To our knowledge this is the first time that this issue has been publicly discussed.

An Explanation – At Last

Over the last year or so there has been an increase in the number of affordable high res desktop film scanners on the market. More and more people now have easy access to 3200dpi or greater scans with equipment like theMicrotek Artix400t, theNikon 4000ED,theCanon Fs4000,Minolta Scan Multi Proetc. Previously only drum scanners could offer this sort of resolution and at a far higher price.

This means that more and more people are producing 60 megabyte scans off 35mm transparencies and are therefore pulling out just about all the information that a slide can carry. This has revealed a hitherto unseen characteristic of film that many, including myself, find a bit worrying.

I started using theImacon Flextight Photolast year to scan my 6×12 transparencies for prints up to 60 inches in size — pretty big by any measure. I noticed that if I looked closely at my scans there were very fine black specks — looking like very fine dirt — showing up all over the image but most obviously in the highlights. 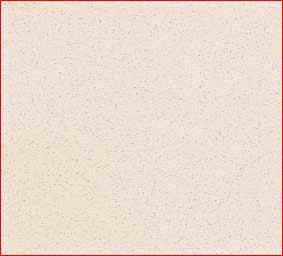 100% section off the Flextight scan of the previous image.
3200ppi.
Specks show clearly but not as pronounced as with the Nikon.

My first thought was dirty water in the processing, but to cut a long story short, I eliminated processing as a source of the problem by processing the same shots in 5 different labs and getting the same results.

My next move was to contact Fuji, and the scans I sent them provoked enough concern that they sent me samples of 7 different films that they had exposed and processed in Tokyo. My scans of these images still showed up the problem. I even used 4 different scanners and still the “Pepper Grain” showed up.

Eventually, after a lot of waiting, Fuji responded to my concerns and informed me that the problem lay in the film base which was being picked up in the scanning process. They assured me that this was being rectified and thanked me for bringing the problem to their attention.

The most interesting facet of all this is that Kodak 100VS does not have this characteristic — or to be fair, has a lot less “Pepper Grain” as the attached samples will show. Velvia has it, as does Astia and 100F. Roll film seems to show it worse than 35mm for reasons I cannot quite fathom.

The following 4 scans were all done with a Nikon4000ED 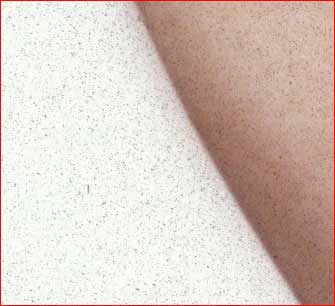 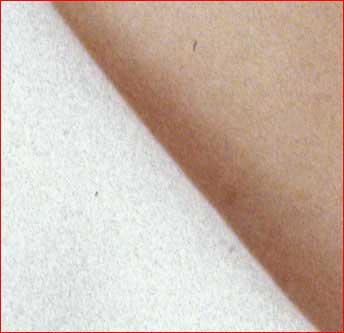 4000dpi scan of Fuji 100F – image is section of a portrait This image shows a white shirt against the skin of a neck, scanned at default.

No sharpening. The specks are really pronounced.

Identical scan on Kodak 100VS

Within a highlight area that shows up as about 240 in the Info palette there will be individual pixels that are only 200 or even 180 – kind of like ‘noise’ 40 levels darker than the actual image. This is pretty extreme. Using the histogram tool, the highlight areas average about 242 in both films (corrected scans) but the Provia has a standard deviation of pixel levels double that of the Kodak film – 9 and 4.5 respectively.

As the specks only show up at 100% or greater on the screen you would have to do a pretty big print to see the specks, anything under 50″ will appear clean although the highlights might look a tiny bit dirty if you look really close. The only way to clean up the highlights is to reduce the density and that will blow out the rest of the digital info at those levels. 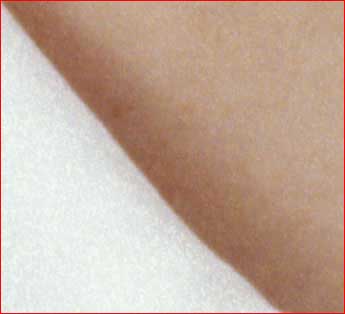 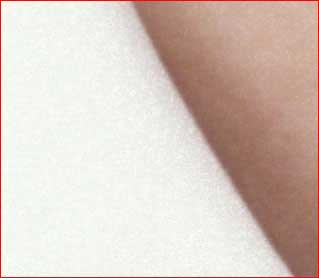 Scanned the same with ICE from Kodak 100VS

There are images on theLuminous Landscapefrom Michael’s Pentax600mm lens testwhich show the “Pepper Grain”, and I have noticed other sites on the Web beginning to comment on this aspect of the very commonly used 100F, especially on the scanning and printing user-groups. No-one was quite sure what it is but finally Fuji have made comment and I can accept that it is an artifact caused by the combination of a rougher film base and high-res dry scans. Drum scans are oil mounted and so do not show this effect to the best of my knowledge, and traditional darkroom prints are inherently soft compared to digital ones, so the problem is masked in any case. It is only the low to middle range dry film scanners that pick up this effect and then, only with Fuji film.

I offer this information not as a criticism of Fuji film — after all it has lots going for it in other areas — but more as offering enough information for the user to make up his or her own minds about whether this “Pepper Grain” is an issue for their own work.

It is an issue for me as I make 60″ prints off my scans and the specksdoshow up at 15 times enlargement. Inkjet prints mask the effect due to the dithering of the ink drops but a Lambda or LightJet print will certainly show black specks in the larger print sizes. I am currently evaluating Kodak 100VS as an alternative to 100F as it seems to be the only film capable of giving me the colours and sharpness I need without these little black gremlins showing up.

It would appear from these tests that Fuji are indeed correct about the reason for these ‘Pepper Grains’ showing up in high-res dry scans. The fact that Nikon ICE removes the specks without affecting the image grain very much is pretty good confirmation of this, unless I am missing something about the way this software works. However, the fact remains; if you dry scan Fuji 100F at 3200dpi or greater on a good scanner you will see ‘Pepper Grains’ in the highlights. Only the individual can decide if this is unacceptable in the context of the work that they do. For me, I will be having a very hard look at Kodak 100VS over the coming weeks and I have some sample rolls coming from Kodak as I write this. I will publish a follow-up shortly to reveal my conclusions.

Lending support to the adage that “things are not always what they seem”,
here is a different perspective on the pepper grain problem.

In August of 2001 I replaced my Canon FS2710 35mm film scanner with a Minolta Dimage Scan Dual II, a 2820 ppi film scanner. I soon noticed that, while the Minolta was sharper than the Canon, it had a tendency to emphasize dirt and flaws on my slides and negatives. I also noticed, as had Michael Reichmann and Nick Rains before me, that viewing light areas in scans at high magnifications showed countless random black specks. 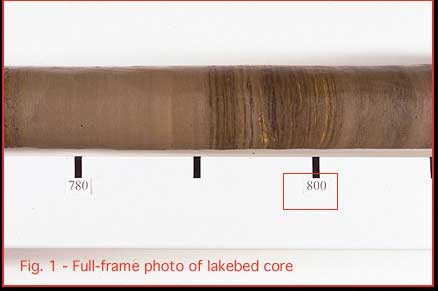 One particularly bad example was a set of slides taken of a series of mud cores bored out of a lake bottom (Fig. 1). Because the background was almost pure white, the whole area of the slides showed the black speckles, as seen in Fig. 2, which is a full-resolution crop from the original scan. 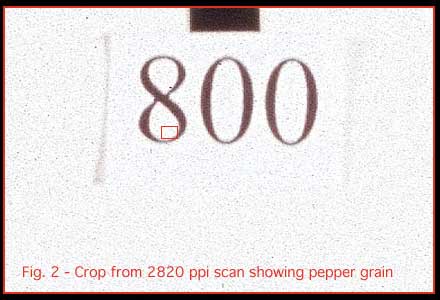 As a scientific photographer, I have access to a selection of high-power microscopes, so I decided to have a closer look at some of the offending slides. Under a microscope set for 400x magnification, I could clearly see that the offending speckles were actually microscopic bubbles embedded in the film. Fig. 3 is from a small area inside the Ã«8Ã­ of the previous figures, taken with a Nikon Coolpix 995 digital camera on a Leitz microscope. The highly refractory nature of these bubbles would most likely make them visible to scanners, especially those scanners that tend to emphasize film flaws. Nick has found that ICE does a good job removing the effects of the bubbles, which is comforting for those who have this feature on their scanners. 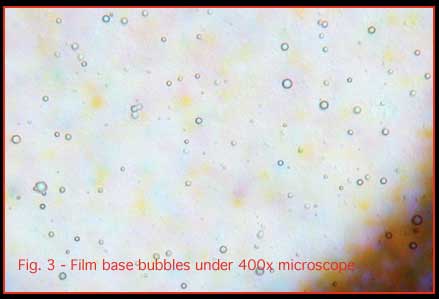 I was then curious as to exactly what part of the film contained the bubbles. It is obvious from Fig. 3 that they are not in the same plane of focus as the film grain itself, but were they above or below the emulsion layer? Focusing carefully up and down on the slide I isolated the bubbles in the scratch-resistant layer just outside the emulsion layer Ã± not in the plastic base as I might have expected. Even so, for convenience I have referred to them as Ã«film base bubblesÃ­.

One puzzle is that, unlike Michael and Nick, I have seen these bubbles in every film type I have looked at, Fuji, Kodak, Agfa, slides and negatives, even some old Kodachromes from 1976. In fact, the examples shown are from Kodak Ektachrome 64 Tungsten slides, taken in September 2001. This discrepancy needs further investigation.

For thirty years Roger Smith has been the scientific photographer in the Department of Biology, University of New Brunswick, in Fredericton, New Brunswick, Canada. A few examples of his work can be seen on theSilverFish Photo Cooperativesite.

He can be reached at: rsmith@unb.ca