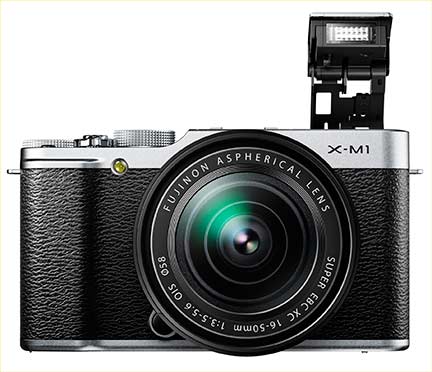 – with apologies to Charles Dickens.

The Compact System Camera (mirrorless to some) segment is something of an enigma. In Japan and other parts of Asia cameras in this segment now (August, 2013) comprise some 10% of the camera market, and sales are growing. In the US it’s less than 2%, and in Europe things don’t seem to be much better. Indeed industry statistics for the first half of 2013 paint a dismal picture with declining sales in all segments, though DSLR sales are declining the least.  Small digicams are almost dead. CSCs are selling slowly, and entry level DSLRs are the area of greatest growth, or rather shall we say slowest decline. It’s not a pretty picture.

The great recession of 2008 is still taking its toll. The good times are over (at least for now), real incomes in the US are in decline, and have been for a couple of decades, while half of Europe is in the economic doldrums, or worse. In some cases much worse.

Why this depressing economics lesson? Because the major Asian camera companies keep producing more new models, hoping, it seems, to find one that will resonate with the marketplace. Nikon and Canon have made tepid entries into the CSC segment which has been dominated mostly by Panasonic and Olympus,  but with FujiFilm making a strong bid over the past couple of years. Samsung is sadly just an also-ran.

The other factor is, of course, smartphones. Young people (and many not so young) have embraced camera phones and social networks, and as with iPods and MP3, find “good enough” to be good enough. Pictures of the grandkids on a picnic, or the giant burger that you eat for lunch now make up the billions of photographs buzzing through the airwaves, and image quality and megapixel count are not just secondary, but mostly not even of consideration. Instagram users don’t give a crap about image quality.

Of course camera makers have been quick to respond by building in GPS and WiFi systems (espresso makers are next), but the public seems nonplussed. One’s pocket phone is all that most people need, with GPS, Wi-Fi, ubiquitous on-line access, high-res screens, gigabytes of storage, and best (and most important of all) multifunctionality that fits in ones pocket or purse. End of story.

Though not the road-kill that was Kodak, Fuji has had a tough time when it comes to cameras. Their DSLR supply from Nikon dried up, and other than point-and-shoots (a moribund category in any event) Fuji seemed to decide that designing and building its own DSLR was a losing concept. But the CSC segment seemed to offer promise and the opportunity to carve out a fresh position.

But unlike Nikon and Canon who have DSLR turf to protect and who have thus far produced ho-hum CSC offerings, Fuji decided to take the high ground. Starting with the fixed lensFuji X100, which caught a lot of people’s attention, they then introduced the interchangeable lensX-Pro 1, which may well be the most innovative new CSC of the past half decade. I was totallycaptivated by it, and now use it along with a set of Fuji’s excellent XF lenses, as my main travel system. 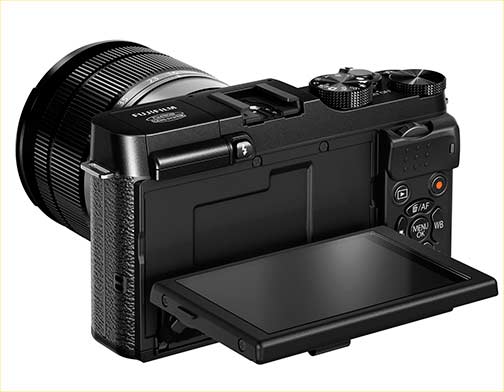 What fascinates about the X-Pro 1 is that Fuji’s marketing approach has been anything but tepid. They attacked the high end of the mirrorless market by producing a camera that would appeal to the existing photographer; someone who likely already owned a DSLR. In this they succeeded; it has proven to be a winning strategy for them and Fuji now has considerable mind-share among photographers, if not the marketshare that they would wish for (yet).

In addition to the X-Pro 1’s innovative hybrid viewing system Fuji added two areas of excellence, a unique sensor and a growing set of excellent lenses.

Eschewing the traditional Bayer colour matrix, Fuji innovated with what it calls X-Trans, a colour system which allows them to eliminate the need for an anti-aliasing filter and thus achieve higher resolution. This got off to a rocky start because it took some intensive software engineering for companies like Adobe and Phase One to decode X-Trans properly. But now they have, and the results from all X-Trans based Fuji cameras are quite excellent. So too are the out-of camera JPGS, an area where Fuji with its vast experience with developing and manufacturing colour film seems to excel.

With the introduction of the X-Pro 1, again Fuji took a road less traveled. Instead of introducing consumer grade zooms, they brought out the first of a set of very high grade primes. More have followed and this past year two excellent pro quality zooms were introduced, with a third following in a few months. 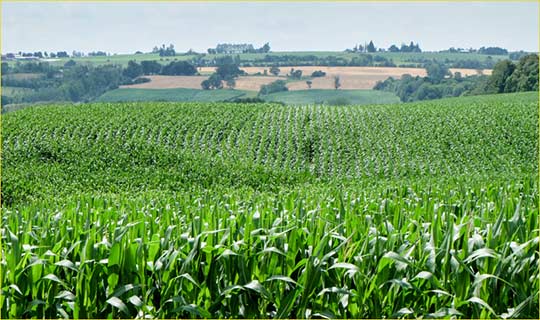 Cameras – The Next Generation

The X-Pro 1 was  followed-up by the X-E1. This is a much more mainstream camera, with a high quality EVF designed to take on Panasonic and Olympus directly, eschewing only the X-Pro 1’s unique hybrid viewfinder. For someone without a love of optical viewfinders (or not old enough to remember them) the XE-1 offered all the advantages of its slightly larger and older sibling, but at a lower price point.

Now, with the newX-M1Fuji has aimed at yet another market segment, the entry level CSC buyer for whom the lack of an EVF is less important than the savings that it entails. The sensor is the same as those in its bigger brothers, so this camera represents quite a bargain. Little has been lost by way of controls either, and an articulated rear LCD is very handy. And to compete with smartphones, wi-fi is now built-in, as has become de-rigeur with almost all new cameras.

Available as both body only and with a newly introduced stabilized XC16-50mm f/3.5-f/5.6 kit zoom, theX-M1 sells for under $800 with lensand under $700 as body only. Silver and black are available initially, with a quite attractive brown leatherette and chrome body following in August. 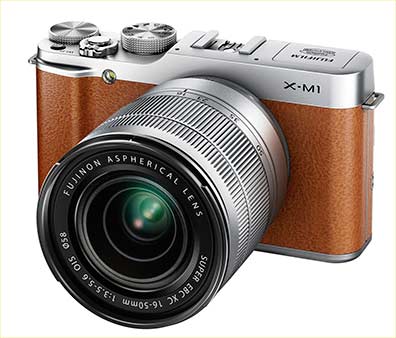 TheX-M1is small. Not so much the width, but the height. Like the Olympus OM-D the camera is so short that its lower right edge digs into one’s palm. The Oly solves this with an available vertical grip / battery holder, but none such is available for the X-M1.  Otherwise ergonomics are fine, and the top and rear scrolls wheels fall nicely under one’s right thumb.

The camera has all the requisite features, such as a pop-up flash (which can be tilted for bounce) and a tilting rear LCD. What it doesn’t have is any sort of viewfinder, either optical or electronic. For some users this won’t be an issue, but others could find this to be an issue. Of course, its unlikely that anyone will purchase this camera without knowing that a viewfinder is not part of the offering.

As for the new lens, I’ve done no formal testing, but image quality appears to be quite decent. The lens has a short zoom range and isn’t very fast, but seems to offer very good value for money, especially for the level of user that this camera is targeted at. Overall image quality is excellent, since the X-M1 uses the same sensor as the XE-1 and X-Pro 1.

If an entry-level compact system camera is what one is looking for the newFujiFilm X-M1is an attractive offering, though in a quite competitive and crowded market.

To view the XE-1 Black at B&HClick Here

To view the XE-1 Silver at B&HClick Here

To view the X-M1 Silver at B&HClick Here

To view the X-M1 Black at B&HClick Here

To view the X-Pro 1 Black at B&HClick Here

Learn about Colour Spaces, Profiles, Calibration & Soft-Proofing   About the Guide to Colour Management Look for the eleven videos #12 to #23 of the Tutorial From Camera to