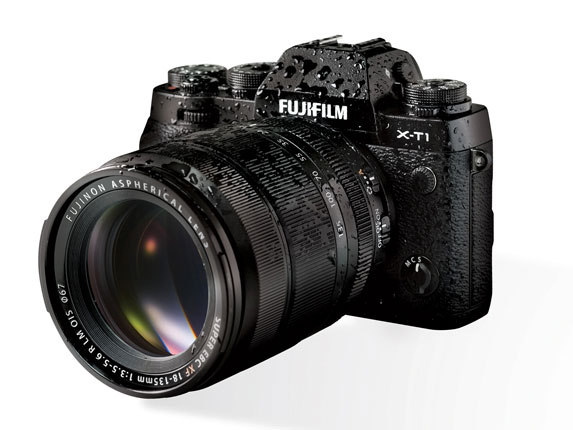 Nick Devlin did our first-use report on the X-T1. I’ve now had a chance to work with this exciting new camera for a while myself. I’m not going to write a laundry list of features, because these are available hundreds of other places on the web. I also will not comment to any degree on image quality. Here’s why.

Now, in early 2014, I don’t believe that there are significant differences in image quality between major cameras and camera brands with roughly similar MP count sensors. Yes, one might have better high ISO capability, another might have more or less pleasing colour rendition – important if you shoot JPGs. But, other than megapixel count, which at more than 16MP is of little importance to anyone who doesn’t make gallery-sized prints, it’s my belief that IQ difference between cameras with sensors of MFT size or larger, is of less importance than how they handle, and of course, most important of all, individual lens quality.

So, while reading DxO test numbers, and some reviewer’s and user’s comments on various camera’s image quality can be of interest, I find that how easily (or badly) a camera responds in one’s hands plays a bigger role in how pleasurable and valuable a tool it might be, than does a quarter stop ISO difference or a small difference in dynamic range measure. Your mileage may differ.

I believe that the so-called mirrorlesss segment is the future of interchangeable lens cameras. As I wrote in my essay Nobody Knows Anything, the market leaders, Canon and Nikon, are likely dragging their heels so as not to jeopardize their dominance of a shrinking marketplace. This will slow down the acceptance of mirrorless in some markets, but it does leave a window of opportunity for Fujifilm and others to capitalize on. Eventually when consumers outside of Asia realize that small cameras produce just as good quality for the most part as larger ones, and increase the uptake of mirrorless to the level it currently enjoys in Japan (50% of the interchangeable lens market), then the Big Two will rouse from their slumbers and validate the market in Europe and North America. But until then, there is an opening for companies like Fujifilm, Olympus and Panasonic to grow their market-share, albeit small at the moment.

Fujifilm’s X-T1 has been a very eagerly awaited device. I know that I was eagerly waiting to get my hands on one ever size I saw its first announcement. Why? Because it appeared to offer the design ethos of another era. A look at the top panel tells the story. Nice solid mechanical wheels and levers for all of the cameras major functions; ISO, focus mode, metering mode, shutter speed and exposure compensation. And, if you have a lens with an aperture ring, such as one of Fuji’s XF primes, you even have direct manual control of that.

Equally as important to my mind, is that when looking down at the top of the camera you can see every major setting. The camera doesn’t need to be turned on, the way a DSLR with a large top LCD and modal controls would be. The ISO and Shutter dials have “A” positions, as do Fuji X lenses, and by moving one of these on or off the A position the camera can be put into various shooting “modes”, just as so many great cameras were in decades part. Retro, but practical above all. Add the locking features and the stiffness of the exposure compensation dial, and I walked around the first day thinking that I’d found myself in camera heaven. 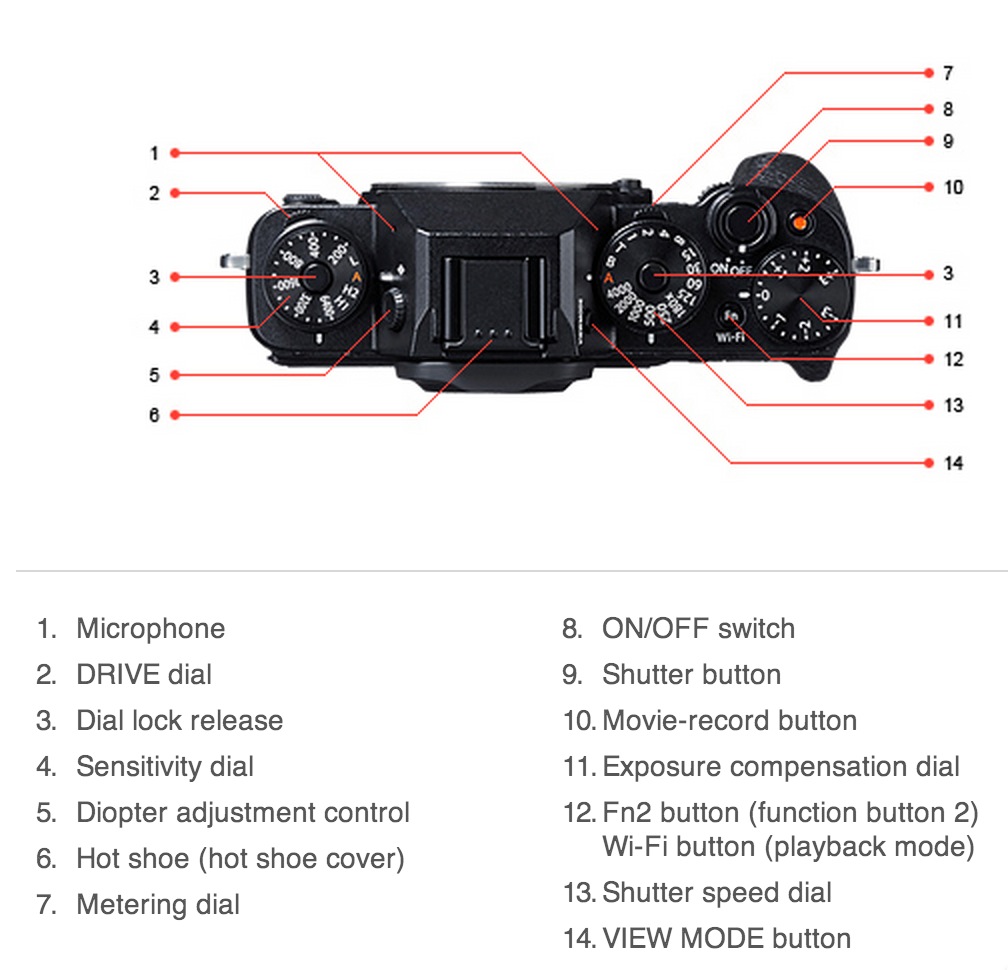 The Limitations of Manual Controls

But, as the saying goes, be careful what you wish for. It wasn’t long after the first blush of passion had passed that I realized that this oh-so-desirable design had a dark side. The camera has no customization settings for shooting modes. This means that when you want to quickly change from one type of shooting to another, every applicable control has to be individually altered. Let me explain.

You are standing out in the field in the late afternoon light taking a shot of your girlfriend posing demurely by a fence. You’ve set the camera to either manual focus, or maybe single button AF. The shutter speed is moderate, because you’re hand holding, the ISO is low for optimum quality, and you have set the aperture fairly wide for shallow depth of field. You’re using average zone metering because she is side lit. Drive mode is set to single frame, and metering for matrix.

All of a sudden, an amazing flock of Canada Geese appears behind her. Their wings are illuminated by the low sun, but they’re flying fast in chevron formation. What a shot! What do you do?

With the X-T1 you turn the dial to change the shutter speed to something fast, say 1/1500 sec. You then turn the aperture dial to something on the wide side, because you don’t want to have to use too high an ISO. The metering mode needs to be changed from average to spot, and the drive mode from single frame to high speed with focus tracking. Finally, the ISO needs to be boosted, because of the high shutter speed, or maybe reset to Auto.

Sadly, by the time that you’ve done all this, the geese have gone back to Canada and have begun to raise their families.

Many, if not most cameras these days have grouped custom settings. This allow a wide range of desired settings to be combined into a single setting and this then assigned to a custom function button. That’s the way I always work. I have at least two custom settings, one for everyday walk-around shooting and one for a situation such as illustrated above, where I need settings appropriate for fast action. The geese may fly by, there could be a fight across the street, a scaffolding is falling off a construction site – press a single button and you’re ready to capture the shot.

So this is the price that one pays with the Fuji X-T1. It is a beautifully designed camera from a user’s point of view. The controls are visible, they are manually set, and they are a pleasure to use. For leisurely shooting, I couldn’t ask for more. But for some photographers, including me, but maybe not you, this isn’t enough. I have become so used to having custom setting groupings on a custom function button, available in a split-second for whatever may happen, that when I realized that the X-T1 didn’t offer this ability I was quite crestfallen. It was as if I discovered that the girl of my dreams snores in her sleep. 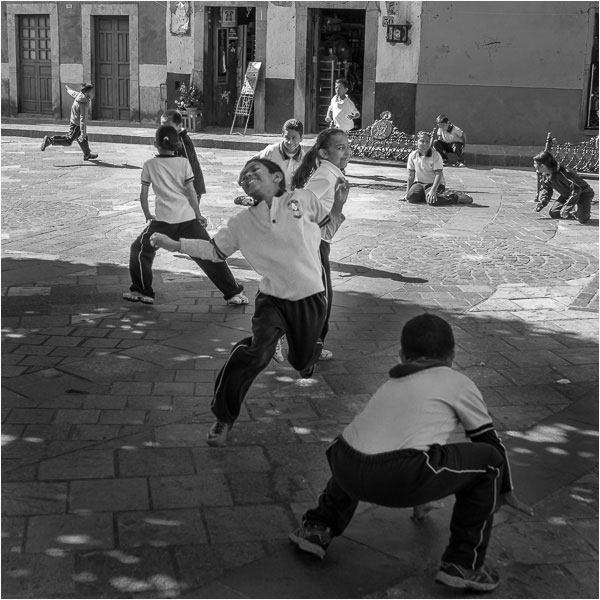 I may as well get my next peeve out of the way. There is a problem with setting exposure, and its this. I have become very used to having an instant review image available, displaying flashing highlights and shadows. Some cameras have this on a full screen image, and some on a thumbnail with other shooting information surrounding it. What this means is that while watching the exposure indicator, and observing the live histogram, I am able to take my best shot (so to speak) at setting the proper exposure, especially in bright and or contrasty conditions.

But, here’s the “gotcha” with the X-T1, and indeed all X series cameras thus far. The instant review image is just that, a full screen image with no shooting data, no histogram and no flashing highlights or shadows. To see if you’ve got a proper exposure without blown highlights you need to take the shot, remove the camera from your eye, and then press the manual review button. Then, one of the available review screens will show you what you need to know. Sorry Fuji, this just isn’t fast enough or good enough.

Many, if not most cameras these days, will show you an image right after exposure (for the length of time you determine beforehand) that shows a miniature, with flashing highlights and a histogram. Then, if you see that the exposure is wrong, by just turning the exposure compensation wheel you can almost immediately take another shot without even moving the camera from your eye.

I’ll also mention that while there is a live histogram available on the rear LCD or the EVF of the X-T1, it is not a very good one. It is small and it is monochrome only, and it doesn’t have very high resolution. I find it very difficult to use accurately when judging exposure, and that’s why the lack of a good review histogram or flashing exposure warning indicators is a serious omission on the X-T1, at least for me and for the type of shooting that I do.

Not to add insult to injury, but there are now quite a few mirrorless cameras that additionally add live exposure warnings in the form of flashing or zebras during live view. This means that before even taking the shot, you know if your highlights are blown or your shadows blocked up. On some cameras you can even set a value between 0 and 255 for the point at which these warnings appear.

I could write pages more about the X-T1. It is a really fine camera indeed. Great built quality and lots of excellent features. Fuji’s lens line up is growing and most of their XF optics are quite excellent. If I owned an X-T1 I would be more than pleased to use it occasionally for some of my work.

But, because of the type and style of shooting that I do, the lack of precise exposure indication at time of exposure, or even immediately afterwards, is a real limitation. Also, as noted above, because my photography covers a variety of subjects and styles, I often need to switch shooting modes and settings quickly in response to changing situations. The need to do so one control at a time on the X-T1, rather than with a custom setting group on a single custom function button, limits what I can do with the camera for my type of shooting. But of course, other photographers may not find these to be the limitations that I do.