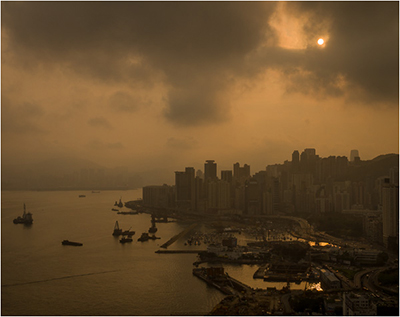 During our time in Hong Kong the weather was pretty nasty; hot, very humid and with occasional rain. The shot above gives a feel for what it was like. We ended up spending considerable time at our hotel, with its panoramic view of Hong Kong harbour. I also had a new Panasonic GH4 camera on the trip, and enjoyed experimenting with both its stills and video capabilities.

Not by any means unique to the GH4 is the ability to shoot timelapse. But on the GH4 one can do so with the camera automatically creating a 4K video at the end of shooting the stills sequence on which it will be based. A quick experiment showed that this worked really well, and so late one afternoon I set up the camera pointing out of our window on the 40th floor of the aptly named Renaissance Harbour View Hotel, and Chris and I went for a drink in the lounge. As we left the room, Chris mentioned that the battery seemed low, but I shrugged, and replied that I thought that it would be sufficient.

When we got back to the room we found that Chris had been right and Murphy had done his job. The battery had died while we were gone and the timelapse sequence terminated. When I put in a fresh battery I found that the stills were all there, but that the ability to automatically generate a video in-camera was not available. Too bad, but not the end of the world.

Instead I loaded the stills (about 1,100 of them) into Final Cut X, put them on the timeline and gave each one a duration of 1 frame. This produced a lovely 4:3 aspect ratio image, which isn’t exactly what I wanted. Then, using a plug-in effect called CineLook, I did a 2.35:1 crop, used Magic Bullet Looks to create a monochrome look, and the result is what you see below.

Some things to keep in mind, whether using the GH4 or any similar camera with timelapse capability.

– Shoot in fully manual mode. Manual focus, manual shutter, manual aperture, manual ISO, and manual white balance. If anything at all changes during a sequence the footage will appear jittery.

– If shooting with the GH4 or similarly equipped camera, use the electronic shutter mode. Animations likes this can require thousands of exposures, and there’s no point in subjecting the camera’s mechanical shutter to such heavy usage.

– Though you can shoot raws, it makes image processing afterwards much easier if the camera is set to JPG mode.

– If you’re shooting in 4K or higher, and then releasing in HD, you can do animated moves on the image and still retain high quality, as I have done here. This can be with the built-in Ken Burns effect in FCP X, or using key-framing in any non-linear editing app. To do moves like this on a shot while shooting a timelapse would otherwise require expensive automated motion-control equipment.

It's really quite boring. Every time a new camera comes along (or someone buys one and feels defensive about their decision), the online diatribes start.