Return to the River

In May 2000, together with a few friends, I took an 8 day rafting trip down theColorado Riverthrough theGrand Canyon. It was a remarkable experience. You canread more about it here. A video documentary on that trip is also featured in Issue #2 ofThe Luminous Landscape Video Journal.

The moment that the trip was over I wanted to run the river again, this time on a trip intended exclusively for doing photography. It took a year of planning, but in May of 2002, in collaboration with well known nature photographer and river runnerCC Lockwood, I lead an 8 member photographic workshop on a specially chartered rafting expedition.

This page includes a number of my photographs from the trip, comments on the workshop experience, and also links to images by workshop members and the other instructors. 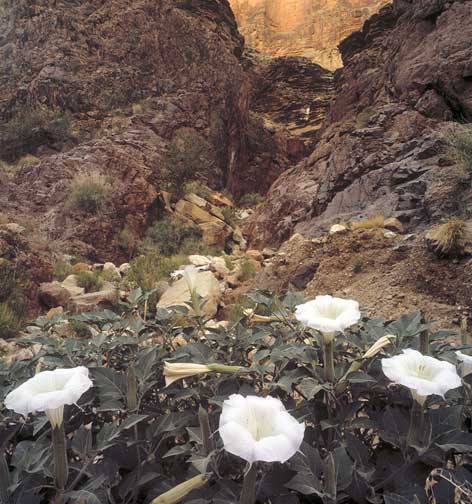 As I anticipated from my trip two years prior I found a number of subjects which lent themselves to the use of camera movements. For this photograph I used both a tilt (Scheimflug effect) and a rising front to provide depth of field from the flowers, which were just inches from the lens, to the distant cliff. A front rise was also used.

Because of the current drought on the desert Southwest there were few wildflowers this spring, but thisSacred Daturabush was in flower in the pre-dawn shade. As soon as the sun rose they would close up for the day. Taken at 5:30am.

There were 8 photographers who joined the workshop, along withCC Lockwood, andSteve Kossackwho assisted with instruction and advise to participants.Chris Sanderson, the director of theVideo Journal,was also along‚ shooting sequences for future editions ofThe Journal. Participants came from all over the US as well as Canada, Norway and Ireland. This made for a party of 12, plus theBoatmanandSwamper,Art and Cathy. 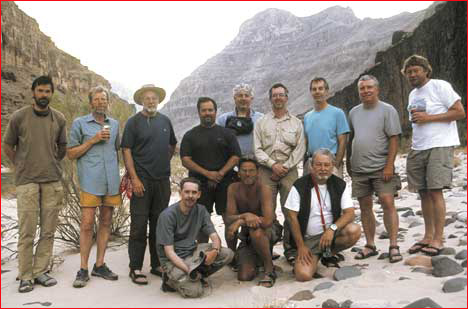 Nearly everyone on the trip shot 35mm. This made a lot of sense since it provides versatility, relatively low weight and bulk, and a wide choice of lenses. I used myCanon EOS 1Valong with the new70-200mm f/2.8L IS, and the28-70mm f/2.8L. I also brought along and used myHasselblad ArcBodywith 35mm, 45mm and 70mm lenses.

I had brought the ArcBody because on my previous trip where I used theCanon 24mm Tilt/Shiftlens for perspective control I had often wished that I was working with a larger format. I ended up shooting far more 35mm than 120, but some of the shots done with the ArcBody really paid off, as you’ll see from the captions on this page.

I had advised workshop members not to bring their digital SLRs. My main concern was battery life, though memory card availability was also a potential issue. Eight days away from AC power as well as the likelihood of shooting between a thousand and two thousand frames would mean bringing a lot of batteries and memory cards.

Consequently, though many of the photographers would have preferred to shoot with their Nikon and Canon digital SLRs, all except one shot film. The one person who shot digital with a Nikon D1x brought several extra batteries, cards and also a device for downloading files. It worked well for him. 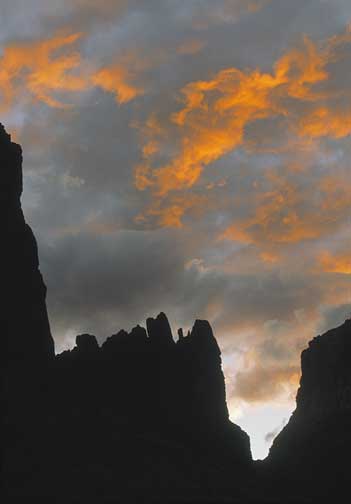 Arriving at our campsite in the late afternoon of the third day I saw a lovely canyon about a half mile upstream from the raft’s pull-in. While most of the group decided to work around the campsite, four of us hiked up into the canyon and were rewarded with a breathtaking sunset vista as some high clouds caught the sun’s final rays.

In addition to 35mm several people also shot medium format‚ one with a Mamiya 7 and another with a Contax 645. One photographer shot 6X7 exclusively with a Pentax 67. 35mm users were about evenly split between Nikon and Canon systems.

The most popular tripod / head combination was aGitzocarbon fiber 1200 series tripod with anAcratechballhead. This is what I used as well, as it is the field tripod system that provides the best combination of low weight and rigidity that I know of for hiking.

Since the skies were crystal clear almost every night most of us tried our hand at shooting star trails. The moon was new that week so we had extremely dark desert skies. On our third night, at theHancerapid campsite, we all lined up our tripods along the shore of the river. The water in the small backwater was very still and we hoped that we’d be able to capture star trail reflections in the river as well. 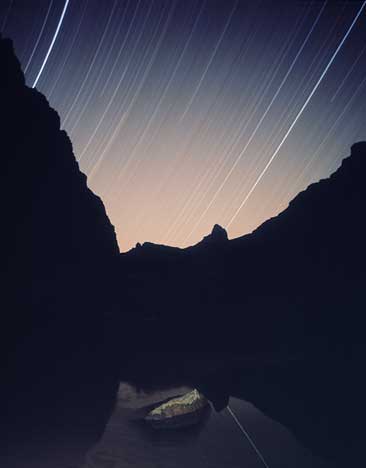 As we were setting up in the twilight I noticed a foreground rock and figured that it would help add some definition to the composition. Once it was completely dark we did some tests using the rear screen and histogram of aNikon D1xto see how much flash exposure would be needed to provide some illumination to the rock and foreground water. Seven pops of a small handheld Nikon flash unit looked about right. We only had one chance at the correct exposure, but figured that we could crop it out if it didn’t work.

Everyone opened their shutters. I popped the flash 7 times and we all walked to our sleeping bags with our flashlights pointed well away from where the cameras were located.

The exposure time was 6 hours. Rather than have everyone traipsing around in the dark at 3am to end exposure I set my watch alarm and got up and closed the shutters on most of the cameras. Some were on intervalometers, and were closed automatically.

Even though my Hasselblad ArcBody’s 45mm Rodenstock lens has a maximum aperture of f/3.5, at the f/4 aperture that I used, 6 hours was enough to capture a large number of star trails and some sky glow, along with one major trail reflected in the river. The flash exposure on the rock turned out to have been just right, and adds a nice sense of depth and perspective to the photograph.

One thing that became apparent was that the Canon EOS system cameras were preferable for long exposures. The Nikons require battery power to keep their shutters open, and many evenings ran out of juice before the end of the night. The Canons work just the opposite way, requiring no juice to keep the shutter open and therefore suffered no battery failures when shooting star trails. A couple of our Nikon users, anticipating this problem, therefore brought along older mechanical cameras for this type of shooting. 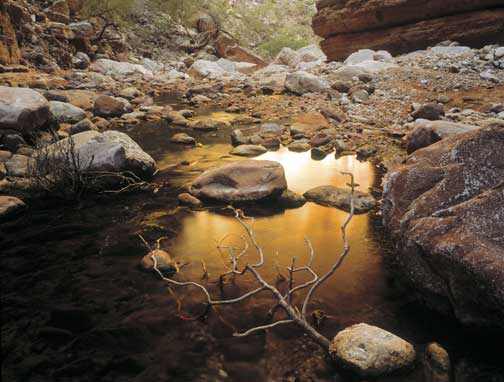 The red rock canyons of the southwest glow with the early morning and late afternoon sun. If you can find a suitable body of water to reflect this rich light luminescent images can be created. This small branch in a shallow stream provided an ideal foreground for such a reflection. Again, a lens tilt was used to extend apparent depth of field.

Though the Grand Canyon is arid Sonoran Desert it abounds with wildlife. Big Horn Sheep are the largest mammals to be found, though there are many birds, lizards and other critters. 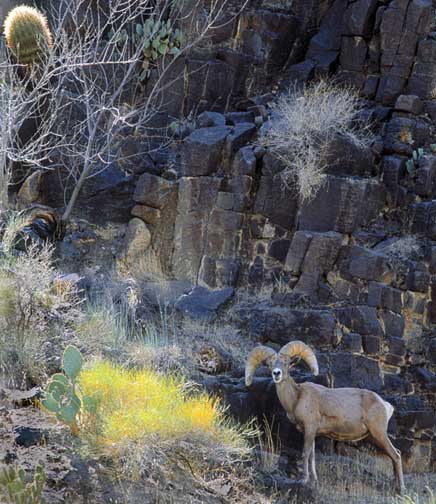 We were fortunate on this trip to encounter big horn sheep on several occasions. I had made a conscious decision to bring the 70-200mm lens instead of the 100-400mm (I only had room in my pack for one), and so when a long reach was needed I used a Canon 1.4X Extender. This combination produced some strong environmental wildlife portraits.

While the landscape beneath the rim of the Grand Canyon is spectacular, it’s the light caused by the mile-high canyon walls that makes for wonderful photographic opportunities. It’s also a challenge due to the extreme contrast ranges presented. It can still be very bright on the ridges, while it’s almost night deep in the canyon. 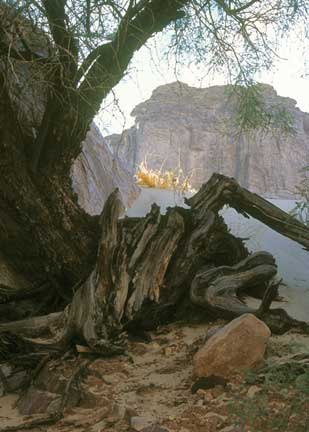 The ways to deal with the contrast range problem include the use of split neutral density filters (grads), a polarizer, waiting for the contrast to diminish as the sun sets, or to do digital composites. Otherwise, make the best of what you have to work with.

There are currently (Summer 2002) three new workshops in the planning stages, two of them to exotic international locations. My workshops sell out very quickly, so if you’d like advanced notice‚ prior to their announcement on the site‚ please fill in theWorkshop Waitlist. No obligation of course.

FacebookTweet Last March, I was planning a shoot in New York City. The lockdown hit and it was off. Everything was off. Clients were unavailable,